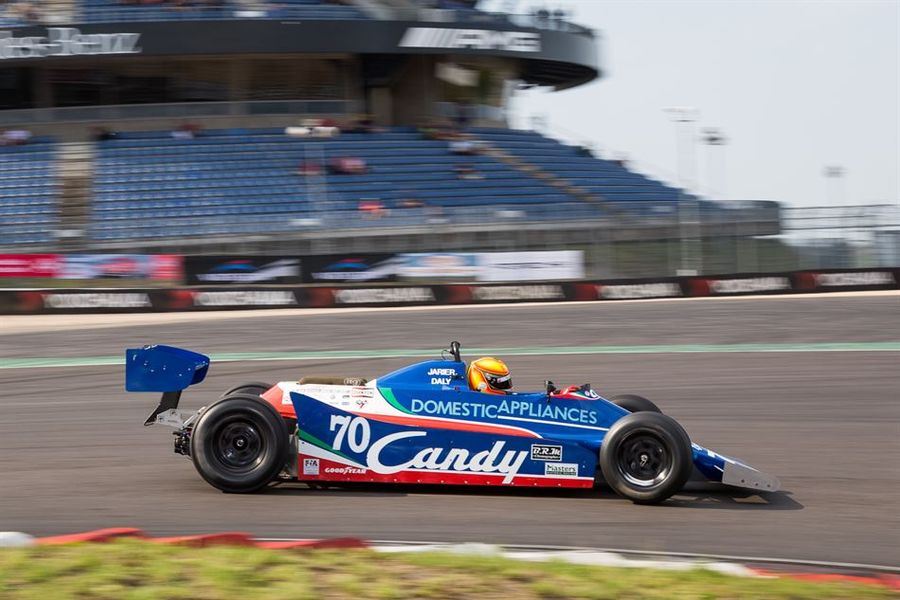 Loic Deman was the star of the annual Oldtimer Grand Prix last weekend as he won both races for the FIA Masters Historic Formula One Championship. Deman took pole for the opening 25-minute race and powered his Candy-liveried Tyrrell 010 into the lead, chased by Michael Lyons (Hesketh 308E), the older Hesketh staying with the Tyrrell for the duration. The gap at the flag was just two seconds with Deman ahead, while Lyons was well clear of third-placed Andy Wolfe (Tyrrell 011). A great battle for fourth went the way of Nick Padmore (Lotus 77) who conquered Steve Hartley’s Arrows A4, while Le Mans winner Paolo Barilla (Williams FW07) took sixth from Greg Thornton (Lotus 91/5) and the Williams FW07 of Mike Wrigley. Lyons won the Pre-78 division from Padmore with Jamie Constable’s Shadow DN8 third. Deman’s double came in a similar second race: the Tyrrell snatched the advantage ahead of Lyons, the two breaking away from the opposition, with Wolfe running third as in the opener. A great charge from Barilla put the Italian fourth ahead of Padmore, Thornton and Hartley. Thornton, though, suffered damage to his front wing, forcing retirement, and that allowed Mike Wrigley’s Williams up into seventh place, while Hartley wriggled past Padmore for fifth. Deman’s overall triumph secured Post-78 honours ahead of Wolfe and Barilla, while Lyons was the pick of the Pre-78 class from Padmore and Constable. Both Padmore and Wolfe were stars of the FIA Masters Historic Sports Car Championship double-header. Padmore started the opener from pole in Max Smith-Hilliard’s Chevron B19 and led away, chased by Jason Wright’s Lola T70 Mk3B and Michael Gans (Lola T290). As Padmore built his lead gap, Wright ran low on fuel in the closing stages handing second spot to Gans with Mark Piercey’s Lola T210 third. Australian traveller Laurie Bennett (McLaren M1B) won the Pre-66 section from Billy Bellinger (Cooper Monaco) and Harms Winter (McLaren M1A). Padmore was later to receive a grid penalty for race two due to a technical infringement. Andy Wolfe took over Gans’ Lola for race two and stole a march at the start of the race only for the safety car to be deployed after Smith-Hilliard, Martin O’Connell (Chevron B8) and Mike Wrigley (Chevron B16) all made contact. Wolfe maintained his lead after the restart chased by Piercy, while Mike Donovan and Jason Wright blasted their Lola T70s up to third and fourth, with Wright eventually sneaking past Donovan for the final podium place. Bennett was the best of the Pre-66 brigade once more from Keith Ahlers (who relayed Bellinger) and Winter. The Gentlemen Drivers enduro was interrupted by a red flag after Joaquin Folch and Marcus von Oeyenhausen’s Jaguar E-types made contact and the stoppage allowed track clearance. On the restart, by now in heavy rain, Michael Gans (AC Cobra) led away from Frank Stippler (Bizzarini) with Martin O’Connell (Jaguar E-type) third. After the mandatory pit stops, Andrew Haddon (AC Cobra) inherited the lead and hung on for victory ahead of Andy Wolfe who had taken over Gans’ Cobra and Jamie Boot’s TVR Griffith in third, both Haddon and Boot having worked their way from the rear of the grid after technical infringements in qualifying relegated them to the back. Tommy Brorsson’s Lotus Elan took 2-litre honours.