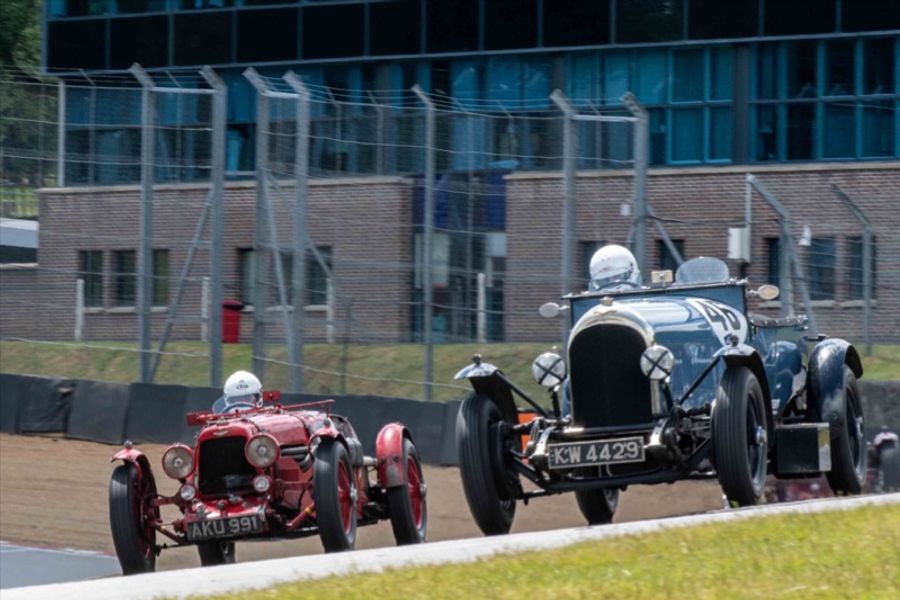 Despite the variable weather AMOC Racing’s eight race programme at Brands Hatch on Saturday 8th June was highly exciting with every race containing a great on-track battle to entertain the crowds, with some fine historic action amongst the more modern racing.

The Pre-War Team Challenge opened the afternoon’s race action, with the handicapper setting the field to start over a 24-second period, with anywhere up to three laps in hand for the varied grid. Christian Pederson unfortunately pulled off in his Austin Single Seater during the morning qualifying session and was not on the grid, and in the first half of the race it was Clive Temple in his Riley Brooklands who led by virtue of his laps in hand.

Tearing up the order were the Wolseley Hornet Specials of Rod and Tony Seber, the former into second on lap nine after passing Duncan Wiltshire’s Bentley exiting Jim Clark Curve, and then set out to reduce Temple’s 41-second advantage. In two laps he had halved the gap, with Tony now into third.

By lap 13 it was a Wolseley Hornet one-two, and they finished well clear after 19 laps, Rod Seber adding drama by pulling off on the slow down lap with a mechanical issue. Tony Seber took second, with Clive Morley coming through in his Bentley for third.

“I slowed midrace to let my brother close up so we could have a race!” said Rod. “Everything went well then I broke down after taking the chequer flag.”

A superb 14-rows of cars lined up for the Jack Fairman Cup with the XK and Mike Hawthorn Challenge cars, although pole-sitter Peter Haynes was slow away in his Lotus XI, John Young’s Jaguar Mk1 heading the long stream of cars in the first corner. Haynes was ahead by lap two, and set about easing away. Young, clear of the battling Rob Newall and Stuart Dickinson in the early laps.

Dickinson got his MGA into third and started closing on the big Jaguar, then on lap 12 Andrew Wenman went off at the bottom of Paddock Hill Bend, bringing out the safety car. The race restarted after five laps behind the safety car, Haynes making the most of the backmarkers between himself and Young to quickly open a gap again, Young once more under pressure from Dickinson. 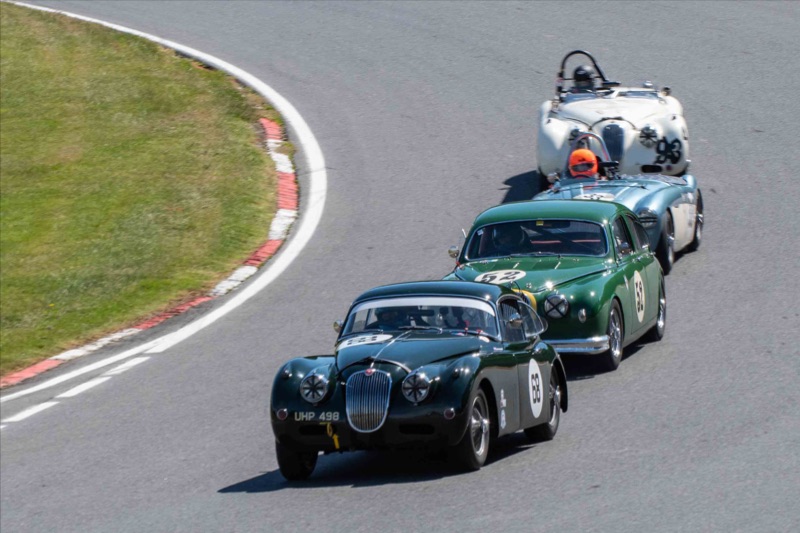 The decisive move came on lap 27, Dickinson looking outside the Jaguar at Druids before claiming the inside line into Graham Hill Bend, and when Young had a slide exiting the corner they finished in that order, Haynes again clear at the front.

“I had a nice lead then the safety car came out!“ said Haynes. “The car wasn’t running well in the opening laps, but it got better, and it is a quick car and almost the perfect one for Brands Hatch.”

The Aston Martin GT4 Challenge and AMOC Intermarque fields lined up together for their 40-minute race, with GT4 Challenge cars filling the first two rows of the grid. No one seems to have told AMOC Intermarque racer Rob Hollyman that he was not racing the GT4 cars as he made a superb start in his Porsche 964 from the third row of the grid, driving round the outside of three cars into Paddock Hill bend to emerge second overall.

Hollyman had a quick look at leader Andrew Jarman half way round the first lap, before moving wide at Clearways and slipping to third behind Matt Becker’s Aston Martin. Jarman continued to lead with Becker a few seconds back and Murphy third, before light rain started falling on lap 12, giving the slick-shod GT4 cars something to worry about.

As the rain increased, Gavin Dunn had moved in front of Hollyman to lead the Intermarque field, only to spin at Surtees, Hollyman taking to the grass in avoidance. Becker went past Jarman to head the field, only to pit two laps later to hand over to Marek Reichman who came back out on wet tyres, Murphy having made the same decision a lap earlier.

At the head of the field Jarman stayed out until lap 23, which put the yet-to-stop Hollyman in the lead overall. He pitted two laps later, just as the safety car came out with a BMW off down the hill from Druids, Hollyman emerging and catching the safety car train now a lap clear of the field.

His advantage was wiped out when the safety car waved the field by until Hollyman was lead car, and they were finally released to race with nine and half minutes left. A well-timed stop and good driving in the conditions had made Robin Marriott lead GT4 Aston Martin and he set off after Hollyman, passing him on lap 33, Hollyman not defending knowing that did not affect his Intermarque lead.

At the end Marriott took the win, the track now drying again, Hollyman second overall and AMOC Intermarque Championship winner, having driven superbly in the tricky conditions. Hiro Akane was second car home for the GT4s, having taken over the car that had led early on in the hands of Jarman and almost catching Hollyman on the line, while Reichman was third.

The Porsches dominated the Intermarque podium, with James Neal and Ryan Hooker coming through to take second, with Adrian Clark third in his 928.

“That was horrible on the slicks when the rain came down,” said Marriott. “We had to change to wets which was better, and from the restart I was just keen to catch Rob Hollyman,”

“I got a really good start and knew the guys in front were on cold slicks,” said Hollyman. “Later on I just waved them through as I wasn’t racing them and was trying to control where they went past so I didn’t lose time. I had no idea where I was for much of the race, so pleased to take second overall as well as winning the Intermarque.”

The final race of the day was the Innes Ireland Cup for Pre’66 GT and Touring Cars, and it was the Austin-Healey of Paul Kennelly on pole, but after a slow start he retired, parking his car just off the pit straight. The Triumph TR4 of John Andon led at the end of the opening lap, but lost out to the Lotus Cortina of Henry Stephenson and Nick Crewdson’s MGB next time round.

Stephenson had the Cortina flying, and moved away from the pack before slowing on Cooper Straight on lap nine and pulling off with an engine issue, handing the lead back to Andon who had fought his way past David Wenman’s Morgan and Crewdson. Andrew Wenman made it a lead quartet by joining the battle in his Jaguar XK120.

Andon held off attack after attack from David Wenman. Crewdson slipped away to fourth in the final laps, and they crossed the line with Andon’s Triumph less than half a second clear of the Morgan, with Andrew Wenman third.