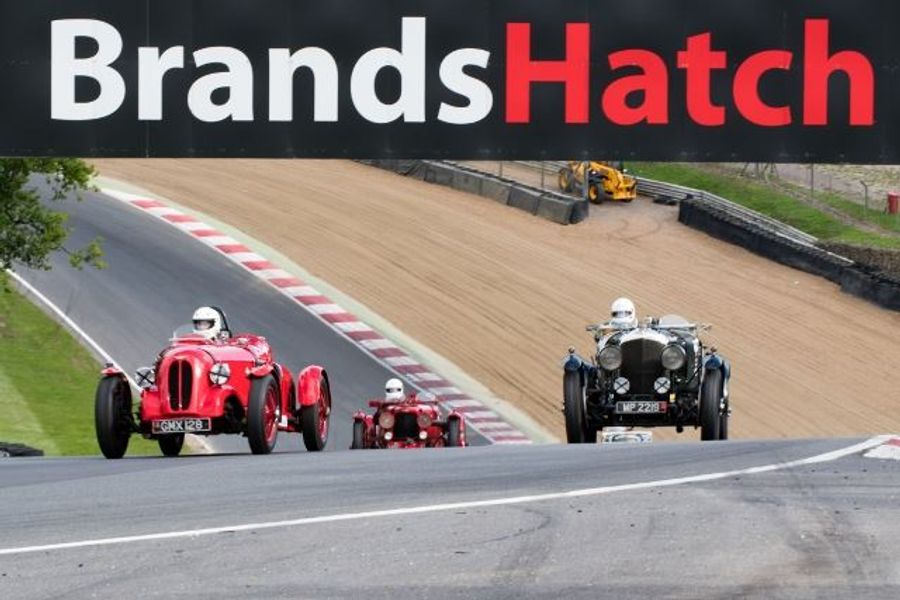 It was AMOC Racing's third meeting of the season at Brands Hatch on Saturday and the sunshine provided the perfect conditions for five exciting races with the usual high standard of competition, with four of the races for cars broadly falling in the historic category.
Opening the day's racing was the Pre-War Team Challenge and with the grid released in a staggered handicap start, Keith Piper’s Aston Martin was flagged away first, with the Bentley of Stuart Morley last to be released 45-seconds later.
There was plenty of overtaking, with Piper holding the overall lead until lap 11 when Guy Northam passed in his Bentley, but the quicker cars were closing in. Stuart Morley moved into second on lap 12, and later that lap took the lead which he held to the flag. The Aston Martin 15/98 of Peter Dubsky set fastest lap of the race finished 2nd overall and Clive Morley finished in 3rd driving the Bentley 3-litre usually piloted by Duncan Wiltshire.
The AMOC Intermarque race went into a safety car period on lap one after the Porsches of Bob Searles and Don Lamb both ended their races in the Paddock Hill Bend gravel.
Racing resumed on lap five, where Ed Leigh's BMW Evo M3 led away the pack pulling out a lead he maintained to the flag. Behind him a fierce battle ensued but after the pit stops settled down and podium contender Rob Hollyman retired with a misfire, it was the Porsche 968 of Peter Mangion who finished second overall. And a late charge by James Guess saw the Porsche 968CS of Guess/Norton finish in third. This means David Norton now leads the Individual Championship by 22 points and with all drivers allowed a dropped round there is still everything to play for at round 6 coming up at Silverstone on 30 September.
Tony Ditheridge had his Cooper Monaco on pole for the AMOC ‘50s Sports Cars incorporating the Vredestein Jaguar XK Challenge race, but it was the Turner Sports ‘Gurney Special’ of Steve Watton looking for a way past on lap one at Paddock Hill Bend.
When Watton pitted to fix a loose plug lead on lap 11, Ditheridge had a clear lead to take to take his second win of the series. Robi Bernberg made it a Cooper one-two less than a second clear of Stephen Bond driving his Lister Bristol Flat-Iron, who had the MGA of Mark Ellis right with him through Clearways on the final lap but was just able to use the power of his Lister to take third over the line.
In the Jaguar battle Andrew Wenman led to take fifth overall in his XK120 while Rob Newall had Paul Kennelly within half a second in the final laps but held on to take second.
Closing the day was the Innes Ireland Cup, which saw Mike Thorne lead early on in his Austin-Healey 3000, Allan Ross-Jones second in his Triumph TR4 from the Lotus Elan of Stephen Bond.
Bond was on the move and soon set fastest lap of the race, by lap 14 he took the lead and began to ease away. After the stops Ross-Jones was charging and took second and was closing on the leader when the chequer flag waved at the end of the 45-minutes, but the win was Bond’s. The Triumph TR4 of Ross-Jones finished second with the Healey 3000 of Thorne/Bennett-Baggs in third.