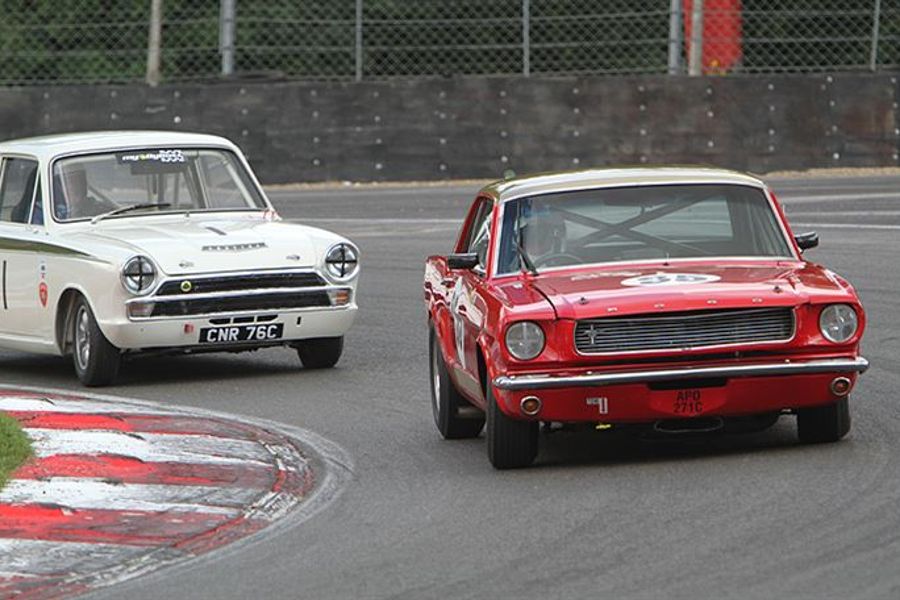 There was plenty of great racing as the Historic Sports Car Club ran its 25th consecutive Brands Hatch Historic Super Prix on the fabulous Grand Prix circuit at the Kent venue over the weekend (12/13 July). Double victories for Martin Stretton (Historic F2), Ian Flux (Martini Trophy) and Michael Lyons (Derek Bell Trophy) topped an 18-race weekend of crowd-pleasing action, but it was the ByBox Historic Touring Car Championship and the Classic Racing Car Championship that delivered two of the best races. An absorbing contest between friends and rivals Tim Davies (Lotus Cortina) and Neil Brown (Ford Mustang) raged right to the finish line of the Touring Car contest as Brown reeled in the early leader. They traded the lead several times before the power of the Mustang finally told after a glorious contest. “It was door to door racing,” said Brown. One of Saturday’s best races came from the Classic Racings as Antony Ross really took the fight to reigning champion Ian Jones in a battle of the Lotus 59s. Eventually, Jones took victory by just over a tenth of a second after a race that both drivers enjoyed as much as the spectators. “Absolutely brilliant,” said Jones after his hardest-won victory for several seasons. Flux, celebrating his 40th season of racing, topped both Martini Trophy races in Sean Walker’s Osella, while Stretton’s mighty pace saw off a strong Formula 2 field despite the best efforts of Richard Evans (March 79B). Frenchman Robert Simac (March 712) scored a double class win among the 1600cc F2 cars to strengthen his bid to retain the championship title. Stewart Whyte and James Dodd shared victories in their Honda Accords in the Super Touring Championship, with Graeme Dodd (Nissan Primera) chasing his son home for a brace of third places. The Super Tourers had a slender grid as many drivers elected to save their cars for the Silverstone Classic races on 26/27 July. The Schryver family came out on top in the 40-minute Guards Trophy race on Saturday as Will and his father Michael (Chevron B6) worked clear of the B8 of Will’s cousin James. Mike Whitaker’s mighty TVR Griffith was the best of the GT cars in a capacity 40-car field. Andy Shepherd stormed to Historic Road Sports Championship success in his flying Lotus 7, while James Dean made it a good day for Lotus with a win in the 70s Road Sports Championship round in his Europa. The similar car of championship leader Oli Ford missed the race after an off in qualifying. In the HSCC Historic Formula 3 Championship race David Methley was unstoppable in his Merlyn Mk14 and won by more than 40s. While Peter Thompson (Brabham BT21) ran second, Steve Smith (Chevron B15) drove a charging race to claim the final podium position from a pit lane start after problems getting the car started. Shining young talent was on show in the Historic FF1600 Championship round as teenagers Sam Mitchell, Michael O’Brien and Callum Grant set a fierce pace. Mitchell was fending off the hard-charging O’Brien when a spinning backmarker inadvertently collected the leader and put him out of the race. O’Brien swept ahead to take the win. Jon Milicevic (Cooper T59) was peerless in Historic Formula Junior, while series newcomer Nick Padmore (March 783) charged ahead in the Classic Formula 3 Championship round. Finally, an excellent Historic Formula Ford 2000 Championship round wrapped up the weekend in style as Graham Fennymore (Reynard SF81) battled ahead of the dicing Ben Tusting (Reynard SF79) and Benn Simms (Royale RP30).