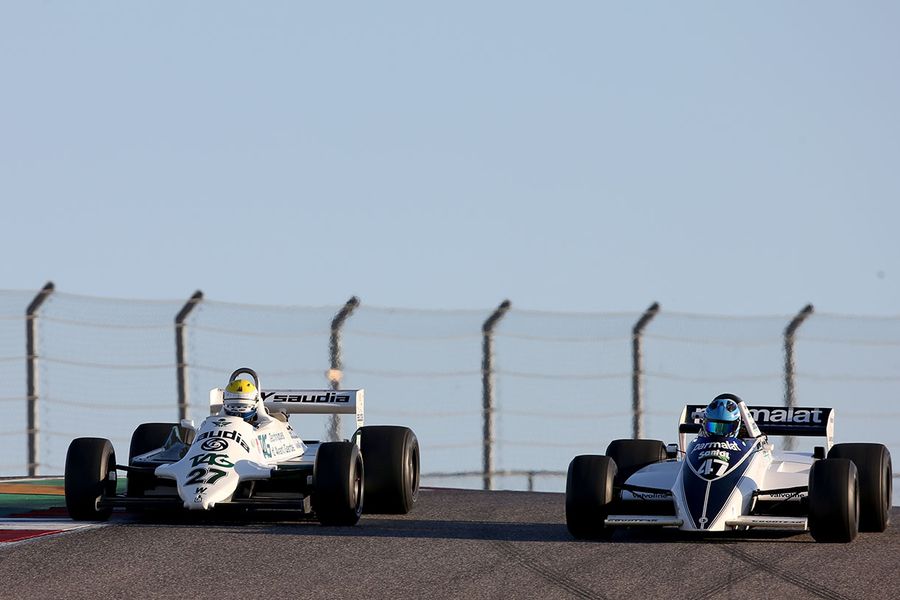 Mike Cantillon (Williams FW07C) and Jamie Constable (Pescarolo LMP1) both dominated the proceedings last weekend in the Masters Support Races to the Formula 1 United States Grand Prix at the Circuit of The Americas, Texas. Racing in Masters Historic Formula One USA and Masters Endurance Legends USA respectively, under clear blue but chilly conditions, the pair hogged the top step of the podium throughout the weekend at the Texan circuit.

The first race for Masters Historic Formula One USA took place directly after Formula 1 qualifying on Saturday afternoon.  Mike Cantillon controlled proceedings behind the wheel of his 1981 Williams FW07C, cruising away from his opponents and swiftly building a lead during the 10-lap race.  Behind Cantillon there was a fierce battle for the runner-up spot between American Jonathan Holtzman (Lotus 87B) and Gregory Thornton (Lotus 91/5), the pair swapping positions on a number of occasions before Thornton took the initiative in his 91/5.

Behind the top three, Christophe D’Ansembourg (Brabham BT49) and Charles Nearburg (Williams FW07) had a scintillating scrap for fourth spot that was settled in favour of the Belgian Brabham driver. Jamie Constable recovered from a minor pre-race fire and pit lane start to secure sixth spot, in front of James Hagan, both behind the wheel of Tyrrell 011’s.

In Sunday morning’s second race, a jubilant Cantillon was never headed throughout the 10-lap race, securing his second victory of the weekend.

The battle behind him was not as straight forward with the identity of his nearest opponent changing a number of times.  Initially Gregory Thornton (Lotus 91/5) and Charles Nearburg (Williams FW07) duelled over second position. A bold move into Turn 12 ensured Nearburg moved into second and he robustly kept his rival at bay through the next sequence of corners.  Thornton soon dropped out of proceedings with a rear suspension issue, clearing the way for Nearburg, only for his Williams FW07C to come to a halt through the Esses, prompting the deployment of the Safety Car.

Nearburg’s problems elevated Jamie Constable to secure the runner-up spot with Jonathan Holtzman joining Cantillon and Constable on the podium.  Fourth was taken by James Hagan (Tyrrell 011B), as he edged Christophe D’Ansembourg’s Brabham BT49 by just three-tenths of a second at the line, with Warren Briggs (McLaren M29) sixth.

A closely-contested affair in the Fittipaldi Class was fronted by Cal Meeker in the ex-Mario Andretti Parnelli Jones VPJ4 as he and main rival Ron Maydon in the LEC CRP1 fought for supremacy.

A 32-strong field set to the track for the Masters Endurance Legends USA races during  the weekend.  The first of the 40-minute races on Saturday morning went to Jamie Constable in his Pescarolo LMP1.  Constable, edged clear of Lola B12/80 rival Craig Bennett through the opening stages of the race, the gap ebbing and flowing around the eight-tenths mark. Constable’s race threatened to be derailed when he and Bennett were caught out by the timing of a Safety Car deployment, caused by Dwight Merriman’s Nissan NPT90 coming to an untimely halt.

But Constable fought back at the restart and reeled in Canadian Claude Malette (Lola Toyota Rebellion), making the pass for the lead shortly before another Safety Car intervention, this time due to Gregory Thornton’s March 83G stopping on track. Constable mastered the restart to streak clear of Malette to greet the chequered flag 9.2s ahead of his rival, while Malette resisted Bennett to finish as runner-up.

The second Masters Endurance Legends USA race opened proceedings on Sunday morning with Jamie Constable making it a weekend of back-to-back victories as he secured the top-step honours again.

Constable, faced early pressure from Craig Bennett (Lola B12/80), falling two seconds  behind at one stage, but quickly re-grouped and overhauled his rival before pulling clear, ensuring his Pescarolo LMP1 machine greeted the chequered flag first for the second time in two days. Bennett’s prospects of another podium unravelled when he was forced out of the race with a broken axle, facilitating Saturday runner-up Claude Malette’s (Lola Toyota Rebellion) rise to another second place.