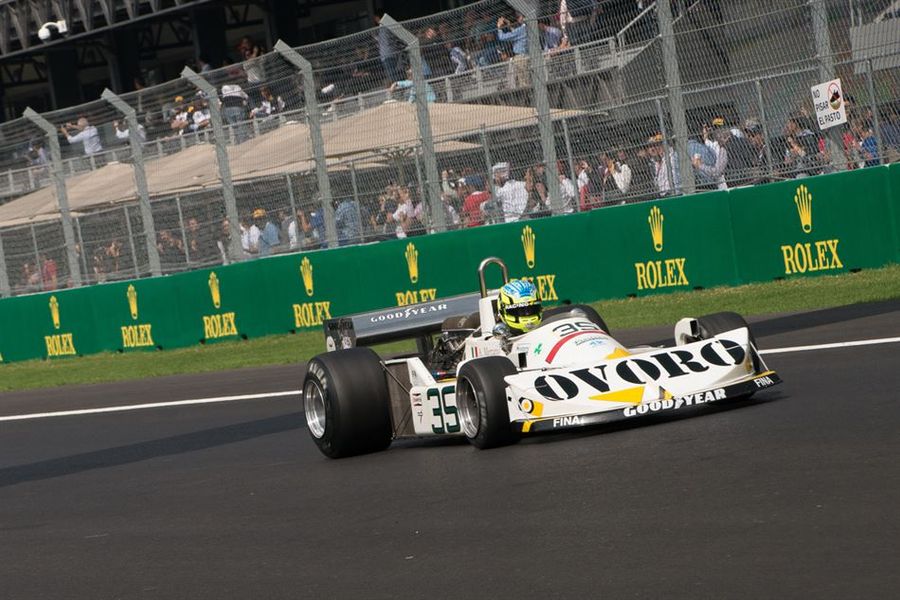 Aaron Scott was the star of the two Masters Historic Formula One races at the Mexican Grand Prix last weekend, as he took a win and a second place against more modern machinery at the revamped Autodromo Hermanos Rodriguez. Scott blasted away from the start of Saturday’s opening round and controlled the race which was interrupted early on after Mike Cantillon(Williams FW08) and Max Smith Hilliard (Williams FW07C) tangled. After a safety car period, Scott was chased by Greg Thornton (Lotus 91/5), but the loss of second gear put pay to Thornton’s chances and he had to settle for second place. Former Grand Prix driver Jean-Denis Deletraz (Surtees TS19), James Hagan (Tyrrell 011) and Andrew Beaumont (Lotus 76/1) all tussled for fourth behind Simon Fish (Ensign N180) who pulled away from the pack to secure third spot. Nick Padmore (aboard Ron Maydon’s Arrows FA1) made steady progress from ninth on the grid to fifth place ahead of the leading Americans, Martin Lauber (Wolf WR6) and Nick Colyvas (March 761) who edged their way up the field to finish sixth and seventh respectively. A broken gearstick for Deletraz left him way down the grid for race two.Aaron Scott briefly led race two, but a quick move from Greg Thornton put him into a lead he was never to lose, despite efforts from Scott throughout the race. Simon Fish secured third position ahead of a frantic fight for fourth: Andrew Beaumont charged past James Hagan’s Tyrrell but couldn’t hold off a determined Max Smith-Hilliard (Williams FW07) who bagged fourth spot. Hagan eventually spun off in the second complex allowing the battle between Jamie Constable (Shadow DN8) and Nick Colyvas (March 761) free to secure sixth and seventh places behind Beaumont. A consistent run by Martin Lauber secured his eighth place finish and Ron Maydon had to be content to follow Nick Padmore over the line for a top 10 finish.