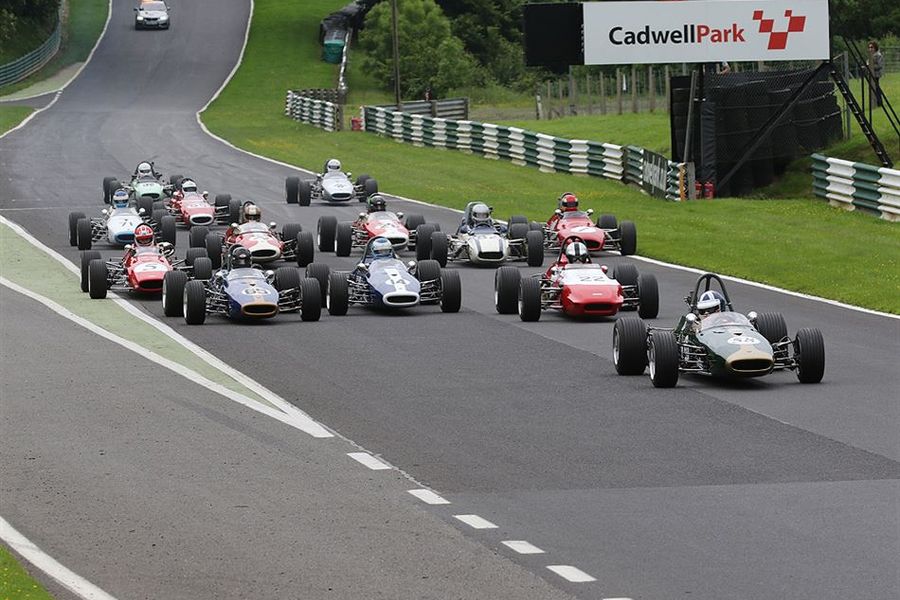 Up to 230 entries for a 22-race line-up will make the Wolds Trophy from the Historic Sports Car Club (17th and 18th June) of the season’s highlights at the glorious Cadwell Park circuit.
Each of nine categories have double-headers while the remarkable Historic Formula Ford 1600 entry requires four races to ensure two starts for each of the 48 competitors. As the category heads towards the highlight of its 50th anniversary season, at Brands Hatch on 1st and 2nd of July, what could be a record Formula Ford entry at Cadwell Park will cap the weekend’s action.
The FF1600 field is packed with quality and there has been some superb racing over the early races of the season. Next is the unique challenge of Cadwell Park as only two points cover the top three drivers. Richard Tarling (Jamun T2) has a single-point lead over Mike O’Brien (Merlyn Mk20) while defending champion Callum Grant (Merlyn Mk20) is one point down on O’Brien. Remarkably, Tarling has never raced there before, while Grant recently won on the Pau street circuit in France. Joining this trio at the head of action will be drivers like Nelson Rowe, Benn Simms, Max Bartell, Sam Mitchell, local youngster Benn Tilley and Dan Eagling.
The 70s Road Sports Championship is having a cracking season and a near-full grid will contest two races with Julian Barter (Lotus Elan), Peter Shaw (Lotus Europa) and Charles Barter (Datsun 240Z) set to repeat their Cadwell battles of 12-months ago. Shaw has switched to a Lotus Europa this season and is joined by Howard Payne and Will Leverett in similar cars. Over in the Historic Road Sports Championship, for cars from the 1960s, Shaw reverts to his regular Lotus Elan and takes on similar cars from John Davison, Jim Grant and Paul Tooms.
There is plenty of top quality single-seater action on the schedule and the pair of Historic Formula 3 Championship races will again run for the Justin Haler Trophy in memory of the renowned period journalist. A capacity 26-car field is capped by the Brabhams of Jon Milicevic and Peter Thompson along with the Chevron of French visitor Francois Derossi. Many cars are now in period livery, including the ex-Reine Wisell Chevron of Jon Waggitt, while welcome series newcomers are Andrew Tart (Merlyn Mk9) and Bert Smeets (Chevron B17).
Formula Junior is always a big part of the event and the rear-engined cars in the HSCC/FJHRA Silverline Historic Formula Junior Championship will once more compete for the Barry Westmoreland Trophy in memory of the popular competitor.
The front-engined cars race first and John Sykes will be aiming to repeat his Donington Park double in his unique Merlyn Mk2, but faces tough opposition from Stuart Roach (Alexis Mk2) and Justin Fleming (Lola Mk2). In the rear-engined races, Benn Tilley will resume his stunning category debut form from Donington and goes up against the similar Lotus 22s of Mark Woodhouse, Alex Ames and Michael Hibberd.
The Lackford Engineering-supported Historic Formula Ford 2000 Championship has also drawn a strong entry and former champion Nelson Rowe is in for a busy four-race weekend as he runs his FF2000 Reynard alongside his FF1600 Crossle. His FF2000 rivals are defending champion Andrew Park and Benn Simms, another driver tackling both classes.
Later Formula Ford 2000s are out in the URS Classic FF2000 Series, which shares a grid with the HSCC’s Classic Racing Car Series. Category newcomer Drew Cameron could head the FF2000s, while FF1600 pacesetter Michael O’Brien will race the stunning McLaren M4A of Mike Flewitt for the first time in the CRC section of the race.
Finally, two races for the Historic Touring Car Championship, with an entry capped by Jack Drury and Warren Briggs in two of four American V8s, and a double-header for the Classic Clubmans Championship round out a fine programme.
On Saturday, the first of nine races will be at 13.10 after qualifying from 09.00.
On Sunday, the first of 13-races will be at 09.30 after qualifying from 09.00.