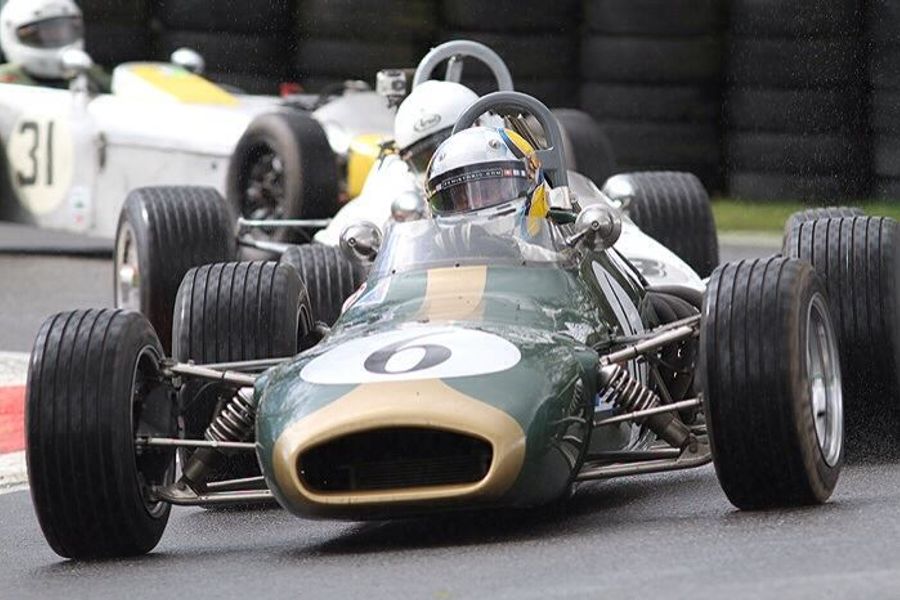 The spectacular Cadwell Park circuit in Lincolnshire is the setting for the next Historic Sports Car Club race meeting of the season, the Wolds Trophy (Saturday/Sunday 21/22 June). As Cadwell Park celebrates its 80th birthday season, a fine programme will cover a broad range of sports cars, touring cars and single-seaters from the late 1950s through to the early 1980s. The 22-race meeting features double-header rounds of many of the club’s and is topped by the annual Justin Haler Trophy races for the Historic Formula 3 Championship. The championship for the fabulous 1-litre F3 cars of the late 1960s has enjoyed a real boom over the last couple of seasons and the field will again compete for the trophy named in memory of the respected racing journalist. Leading entries include Benn Simms, who hopes to debut his rare Elfin 600, Peter Thompson, Jim Blockley and Peter Williams in Brabhams and Iain Bankhurst in his Alexis. Some of the cars on the Historic F3 grid were at Cadwell Park a year ago to take part in filming scenes for the ‘Rush’ movie and to mark that association the film, which tells the story of the rivalry between James Hunt and Niki Lauda, will be screened in the paddock restaurant on Saturday evening. Drivers like Hunt and Ronnie Peterson raced 1-litre F3 cars at Cadwell Park in period. The ByBox Historic Touring Car Championship is set to deliver some of the weekend’s most entertaining racing as the Lotus Cortinas of Tim Davies, Mike Gardiner and Richard Dutton take on the Ford Mustangs of Neil Brown and Warren Briggs as well as a horde of rapid Mini Coopers and Hillman Imps. The HSCC Historic Formula Ford Championship continues to deliver fabulous racing for the single-seaters from up to 1971 and the most recent race at Snetterton was almost a dead-heat as Benn Simms beat Westie Mitchell by one-thousandth of a second. At Cadwell, former champion Mitchell will hand his Merlyn Mk20 back to his younger son Sam now that Sam has finished his A-level exams. An over-flowing grid includes rising stars Max Bartell, James Hadfield and Robert Wainwright. Simms will also campaign his newly-rebuilt Royale RP30 in the HSCC Historic Formula Ford 2000 Championship, where a strong entry includes Graham Fennymore (Reynard SF81) and Ben Tusting (Reynard SF79). Reigning champion Oliver Ford is clearly the man to beat in this year’s HSCC 70s Road Sports Championship and his Lotus Europa will be setting the standard at a track where it has previously been a winning package. His opposition will include Peter Shaw (TVR Tuscan), Julian Barter (in the Lotus Elan of Iain Daniels) and Charles Barter, who again takes over the TVR 3000M normally raced by his son Julian. Stepping back a decade into the 1960s are the cars in the HSCC Historic Road Sports Championship and this annual visit to Lincolnshire gives the smaller-engined cars a chance to topple the usually dominant Morgan Plus 8s. Kevin Kivlochan will fly the Morgan flag against challengers like Justin Murphy (Ginetta G4) and Andy Shepherd (Lotus 7). The Millers Oils Formula Junior Championship has races for both the front- and rear-engined cars. Mark Woodhouse (Elva 100), Justin Fleming (Lola Mk2) and Stuart Roach (Alexis Mk2) head the front-engined cars, while the rear-engined contest will include Jon Milicevic (Cooper T59) and Callum Grant (Lotus 22). Rounding out a very full programme are double-headers for the HSCC Classic Racing Car Championship, the HSCC Classic Formula 3 Championship and the HSCC Classic Clubmans Championship. On Saturday, the first of nine races will start at 13.15 after qualifying from 9am. On Sunday, the first of 13 races will start at 09.55 after qualifying from 9am.