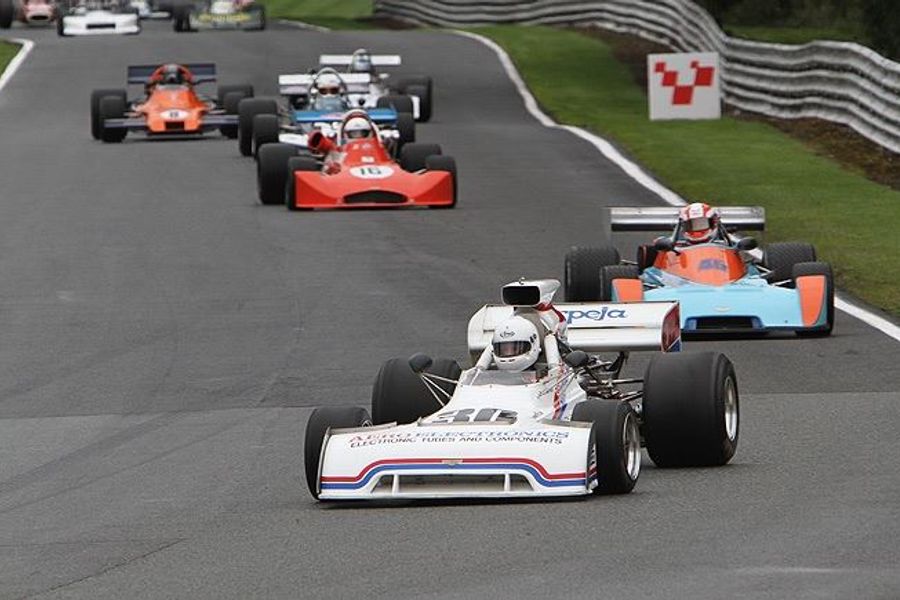 The focus for the Historic Sports Car Club switches to Cheshire this coming Bank Holiday weekend for the Oulton Park Gold Cup, 29th to 31st of August. A tremendous 19-race programme will give racers their annual chance to tackle the three-dimensional challenge offered by the beautiful parkland track. After practice and qualifying on Saturday, Sunday features a full afternoon of 10-races while Monday has early qualifying followed by a further nine races. Monday’s programme will be enhanced by a demonstration session from the stunning Le Mans-winning Jaguar XJR9. Andy Wallace drove the car to victory in 1988 and he will be back behind the wheel on Monday to treat fans to the sight and sound of a Group C car in action at Oulton Park. On Sunday, Wallace will be on the grid for the final round of the 2015 Jaguar Heritage Challenge at the wheel of Nigel Webb’s Mk1 Saloon. With two C-types, an ex-Jackie Stewart E-type and several XK120s, it should be a fine conclusion to a very successful first season for the Challenge. The E-type of Martin Melling and Graeme Dodd is likely to set the outright pace. Two more 40-minute races feature on Sunday afternoon as the excellent Guards Trophy entry is split across two races. The GT cars are out first and no less than six TVR Griffiths head the field against Jaguar E-types and the AC Cobra of Robert Bremner. Top of the TVR’s should be Mike Whitaker, but Mike Gardiner and Dan Cox will be chasing hard. Among the fastest of the smaller-engined cars should the Lotus Elan of father and son John and Tom Bradshaw, with both drivers having bags of Oulton Park experience. The sports-racing element of the Guards Trophy includes four Chevrons as the Bolton marque celebrates 50 years and the B8s of Charles Allison and Philip Nelson should be to the fore along with the Elva Mk7S of Max Bartell and Callum Grant. Two grids have double-header races on Sunday as the Historic Formula 3 Championship and Silverline Historic Formula Junior Championship deliver single-seater action. Croft winner Mike Scott heads the 1-litre F3 pack in his Brabham BT28, while Swiss visitor Urs Eberhardt (Lotus 27) could set the Formula Junior pace. On Sunday are rounds of both the 70s Road Sports Championship and ONI PLC Historic Road Sports Championship, with close to 50 cars in action across the two races. The Historic Road Sports open the racing and it is Morgan Plus 8 pilot Kevin Kivlochan who tops the entry. In the 70s division, Peter Shaw (TVR Tuscan), Charles Barter (Datsun 240Z) and Jim Dean (Lotus Europa) are the key players. Wrapping up Sunday’s races will be the first element of a double-header for the Derek Bell Trophy for a fantastic array of powerful single-seaters. The second race is on Monday and a strong field includes half a dozen thundering Formula 5000s, including the unique ex-Peter Gethin Chevron B37 of Neil Glover and the Lola T300 of 1974 Gold Cup winner Ian Ashley. Monday’s programme includes a double-header for the ByBox Historic Touring Car Championship with more than 30 cars entered. The flame-spitting Ford Mustang of Warren Briggs will head the field along with a gaggle of Lotus Cortinas in the capable hands of drivers like Tim Davies, Mark Davies and David Tomlin.
Another bumper grid, which is full with reserves, is for the Historic Formula Ford 1600 Championship. Callum Grant and Rob Wainwright are likely to renew their fantastic rivalry from Croft, while more front-runners like Michael Mallock and Tiff Needell add to the quality of the entry. More single-seater racing on Monday comes from rounds of the Historic Formula Ford 2000 Championship, the Classic Formula 3 Championship and the Classic Racing Car Championship. Finally, races for the Classic Clubmans Championship and the FISCAR series for 1950s sports cars complete a tremendous programme. On Saturday practice and qualifying is from 09.00.On Sunday the first of 10 races is at 12.05.On Monday the first of nine races is at 11.35 after qualifying from 08.30.