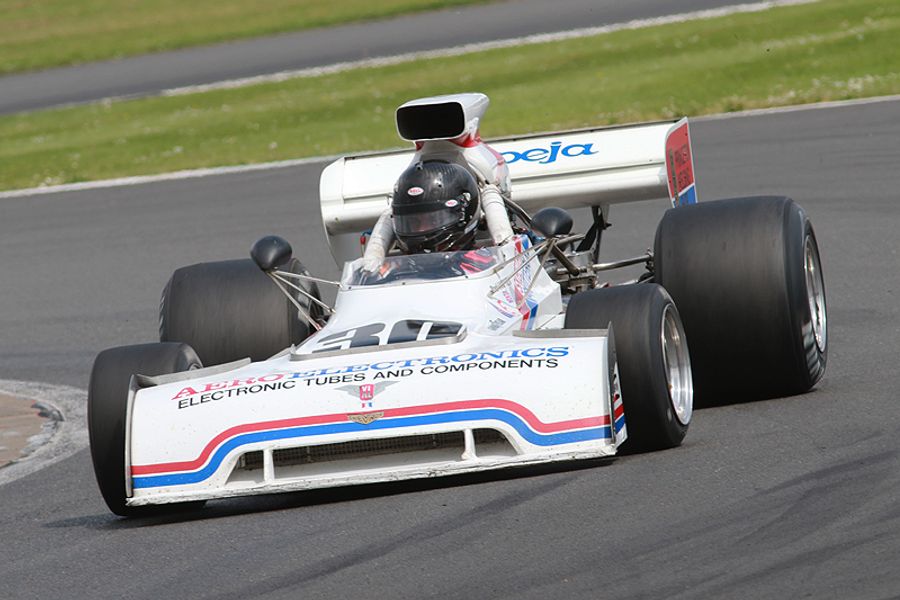 This weekend’s Legends of Brands Hatch meeting marks another highlight of the Historic Sports Car Club’s racing season with a fabulous line-up of 17 races on one of Europe’s finest tracks (29th/30th June).

Highlights of the weekend on the wonderful Grand Prix circuit include two races for the HSCC Thundersports Series, a mighty 25-car field for the XL Aurora Series, a 35-car Formula Junior field and bumper grids for Historic Formula Ford, Historic Road Sports, Guards Trophy and 70s Road Sports. In the Dunlop Saloon Car Cup three stunning Ford Sierra RS500s will go into battle, while a gaggle of E-types will contest the lead of the Jaguar Classic Challenge.

Meanwhile, welcome guests are racers from the Historic Grand Prix Cars Association with no less than four races, two each for the split front and rear-engined grids. The front-engined grid brings out a truly gorgeous array of cars, ranging from the 1934 Alfa Romeo 8C of Matt Grist to the 1961 Ferrari Dino of Richard Wilson.

With seven wins from seven rounds, Cameron Jackson is already a clear favourite to retain his HSCC Historic Formula Ford Championship title as the schedule reaches rounds the mid-point of the season. Another double win two weeks ago at Cadwell Park has given him a 69-point lead.

The big rivals to Jackson will come from the Silverstone-based Speedsport team of Mike O’Brien. Ben Tusting and impressive newcomer Pierre Livingstone have chased Jackson so far and rejoining them this weekend in a third Speedsport Merlyn will be another potential winner, Ed Thurston.

The fabulous XL Aurora Series entry features Formula 5000, Formula 2 and Formula Atlantic cars from up to 1979. It is a significant year for the series as 2019 marks the 50th anniversary of the first Formula 5000 races in Europe. Thus, it is fitting that a superb field of at least 11 Formula 5000s will gather at the spiritual UK home of the category.

Top of the F5000 pack will surely be Michael Lyons, who will take time out from his modern sports-prototype and GT racing to run his family’s Lola T400. Michael’s pace in the Lola is sensational and anyone that keeps him in sight will be doing well. His F5000 rivals include category newcomer Marc Campfield, who showed stunning pace at Silverstone in May as he stepped up to race his father’s Chevron B24.

A special element of this weekend’s Dunlop Saloon Car Cup entry is three Ford Sierra RS500 Cosworths. Donington winner Mark Wright will be joined by two very famous cars from Australia as Michael Lyons has his debut race in the former Eggenberger car owned by Peter Sturgeon and Carey McMahon brings the ex-Tony Longhurst 1990 Bathurst car to Europe. From Germany comes the Open Vectra of Steffan Irmler while Darren Fielding runs his ex-Cleland Vauxhall Cavalier among the Super Touring entries.

The Historic Road Sports Championship has an extended half-hour race at the end of Sunday’s programme. The man to beat over recent weeks has been Kevin Kivlochan and his AC Cobra, with four wins on the bounce at Snetterton and Cadwell Park. There is no shortage of class rivals at Brands, including four Morgan Plus 8s led by Richard Plant. From the other classes come title contenders Jonathan Rose (Lotus Elan), Tony Davis (Sebring Sprite) and Roger Lee (Lotus 7).

Saturday includes a single race for the FJHRA/HSCC Silverline Historic Formula Junior Championship as the series reaches round seven of 14 races. The overall battle will be among the later disc-braked rear-engined cars and it is double 2019 winner Sam Wilson who could set the pace in his Lotus 20/22. Rivals to Wilson include Thruxton winner Andrew Hibberd (Lotus 22), Peter Morton (Lightning Envoyette) and the very rapid Tim De Silva (Brabham BT2), while the leading front-engined cars include Robin Longdon (Lola Mk3), Alex (father of Peter) Morton (Condor SII), Michael (father of Andrew) Hibberd (Lola Mk2) and Harindra (father of Tim) Da Silva (Lola Mk2).

Another HSCC category enjoying first rate support is the 70s Road Sports Championship, which has a half-hour race on Sunday. To date, John Dickson (Ferrari 308GTB), former champion Charles Barter (Datsun 240Z) and current champion Jeremy Clark (Lotus Elan) have all won races. However, all of them have missed races or chalked up retirements and in the case of Clark (Donington) and Dickson (Cadwell Park) failed to start after qualifying dramas. Instead, the consistently rapid Jaguar E-type S2 of Adam Bagnall has a 10-point championship lead after his best start to a season to date.

The first class entry for this weekend’s Guards Trophy includes six examples of the sublime Chevron B8/B8 design. Another class maximum will not be easy for early points’ leaders Michael and Andrew Hibberd (Lotus 23B) as young chargers Benn Tilley and Peter de la Roche will both go solo in Lotus 23Bs, while the massed Chevron ranks include Charles Allison, Daryl Taylor and Philip Nelson. Ranged against the Mike Gardiner/Dan Cox TVR in the GT stakes will be Oliver Ford (Lotus Elan) and two more TVRs for Peter Thompson and Jamie Boot.

Silverstone winners John and Gary Pearson head the Jaguar Classic Challenge entry for an hour-long race on Saturday. The chasing pack of quick E-types includes those of Ben Short, Jamie Boot, Mark Donnor and father and son combo Paul and Myles Castaldini. While the E-type is easily the most popular model, earlier cars including the wonderful D-types of Ben Eastick and Chris Ball, the S-type saloon of Roger Cope and the XK150 of Marc Gordon provide the variety.