Brabham's Big Push for the Title! 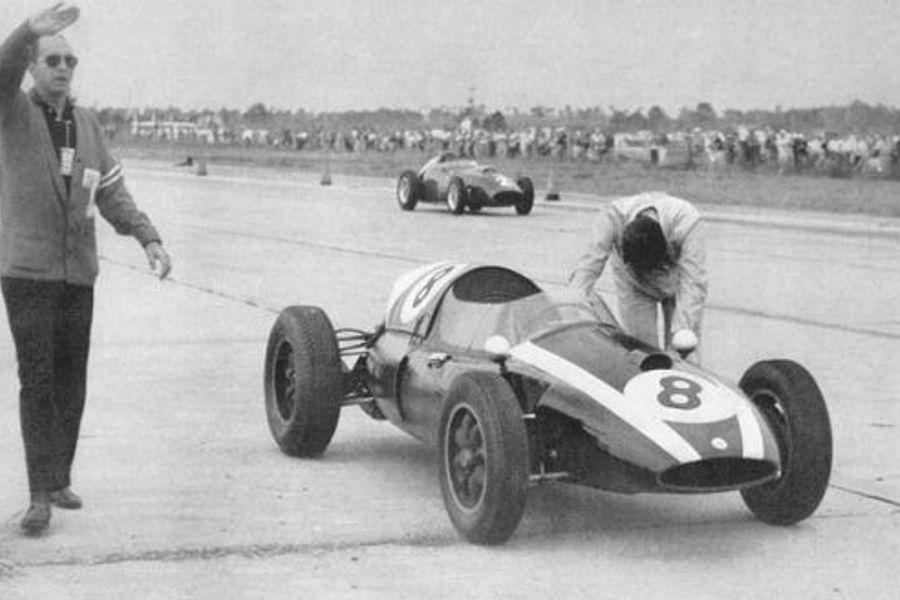 With the US Grand Prix this weekend at the Circuit of the Americas in Texas, it is a chance to look back at our article on one of the most famous American rounds of the Formula One World Champioshhip, which saw Jack Brabham take the title in a unique fashion:

Easily one of the most memorable US Grand Prix was that of 1959, when Jack Brabham’s ‘final push’ for the title became exactly that as he pushed his Cooper T51, which had run its fuel tank dry, across the line at Sebring to take fourth place and the Formula One World Championship. Three drivers had arrived at the Florida circuit, hosting the ninth and final round of the Formula One season, with a chance of taking the title, Brabham had the points lead but given the right finishing order either Stirling Moss or Tony Brooks could have overtake him.

Brabham’s Cooper had taken him to wins at Monaco, the season-opener, and in the British GP at Aintree, and with the best five scores counting for the title was on 31 with a fourth place to drop if he bettered that at Sebring. Moss was on 25.5 points and needed to finish ahead of Brabham and at least second, while Brooks was on 23 and nothing less than a win would give him any chance.

The Sebring race had at one point been scheduled to open the season, but was now taking place on December 12th, and Brabham had broken his journey by taking in a race at Nassau Speed Week – where a car flicked up a stone and smashed his goggles, the Australian having chips of glass removed from his eye in hospital. Arriving in Miami on the Tuesday before the race, the eye was just another issue to deal with over the weekend, doctors not convinced they had removed all the glass.

Once qualifying began the pace of the cars was apparent – Moss shattering his own existing circuit lap record (set in an Aston Martin DBR1 sportscar) by 20-seconds. Brabham was having some gearbox issues, so swapped cars with his young teammate, Bruce McLaren, the latter promptly having the crown wheel and pinion fail: “Had I used that car I wouldn’t have completed a lap in the race,” said Brabham.

As it was, the championship leader did not like the handling of McLaren’s Cooper, and the team discovered the chassis was twisted, Masten Gregory having clouted a kerb in the car at the Portuguese GP.  The team worked hard to straighten it overnight, Brabham adjusted the suspension to get the car to handle reasonably well, and then had to face a brake issue and a gearbox change.

Moss took pole in his Cooper with Brabham next up, with a dispute on the grid about who was third – Harry Schell saying he had done a 3m5.2s lap, but the timekeepers having him several seconds slower and on the fourth row. A front row slot for the American meant Ferrari’s Brooks dropped to row two, and the Italian team were making their feelings felt about that to the officials – peace only restored as the band and majorettes started up and everyone realised there was a race to run.

From the start Moss blasted away in search of the point for fastest lap, Brabham content to let the Englishman go, sure his car would not stand that pace. Brooks was soon heading to the pits to have his car checked having tangled with team-mate Wolfgang von Trips and rejoined 15th.

At the front Moss had eased away in the lead, but on lap six his gearbox went. His pit crew signalled to Brabham ‘Moss Out’, but he had already seen his rival’s Cooper parked up at Webster Turn. Brabham led and was under no threat, McLaren in second and not going to challenge his team mate.

Passing the pits to start his final lap, Brabham gave them a nod. “I was about a mile from the finishing line when the car started to run on two cylinders,” said Brabham. “I just couldn’t believe it!”

Seeing his team leader in trouble McLaren slowed, but Brabham waved him on, Maurice Trintignant also going past. The Cooper finally rolled to a halt around 500 yards from the finish line – which was slightly uphill. Brabham got out and started pushing, determined to get his car across the line.

“I remember seeing Tony Brooks go past,” said Brabham, “and I just put my eyes on the road and kept pushing. It was hot, they tell me the crowd went wild.”

After what seemed an age Brabham crossed the line and dropped to the ground: “I don’t remember a thing other than flopping down beside the car and reviving myself with a bottle of Coca-Cola,” said Brabham. “I flopped out for a quarter of an hour to get my breath back – then it dawned on me I had won.”

Brabham was fourth – just under five minutes behind McLaren who had taken his debut win in the excitement. The unique finish to the season was the first of Brabham’s three titles, the Australian winning again the very next season.

"What a way to win your first Formula 1 World Championship” said David Brabham, son of the multiple World Champion, "pushing the Cooper-Climax T51 across the line, after John Cooper didn't put quite enough fuel in the car, made winning the title even sweeter for Dad I would say. I think this moment at the 1959 US Grand Prix put Jack on the map and demonstrated the tough Aussie grit and determination to succeed. It's become a legendary moment in motorsport."

Video from Sebring is below, we apologise for the lack of audio.