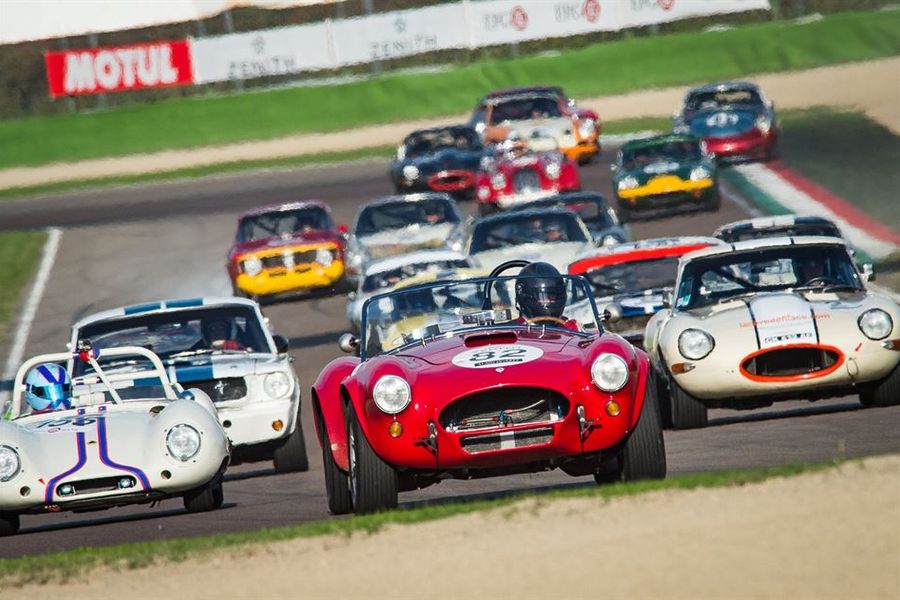 Click on the Video tab for footage from Imola!
Peter Auto’s final event of the 2016 season took place on the weekend of 22nd and 23rd  October on the Enzo and Dino Ferrari circuit, Imola. It gave the drivers in five of the Parisian organiser’s grids the opportunity to go head-to-head one last time before the winter break with some still chasing the points necessary to clinch titles in the overall general classification. Free practice and qualifying were followed by races in the Classic Endurance Racing 1 and 2, Sixties’ Endurance, Heritage Touring Cup, Trofeo Nastro Rosso and U2TC grids took place under blue skies in the Emilia-Romagna region of Italy.
In the majority of grids the final event of the season proved decisive for awarding the title beginning with CER 1 in which Grant Tromans and Richard Meaden led Martin O’Connell-Sandy Watson by a single point in the Proto 1 category before the Italian round. Thanks to their telling win last weekend Tromans-Meaden increased their lead in the overall classification and sealed the title. In GT1, only two points separated the French pair Raymond Narac-Michel Lecourt and the Germans Ralf Kelleners-Detlef Von der Lieck before the final race. The outcome was uncertain for a long time and finally victory went to the latter in their De Tomaso Pantera, which beat the Porsche 911 RSR 3L driven by the Normans, giving the German duo the championship victory in the last event of the season.
In CER 2, Dominique Guénat failed to cash in on the advantage he had before arriving at Imola. He finished tenth in the race while Tony Sinclair came home second snatching the lead in the final overall classification in Proto 2 by two points! Yves Scemama, who was also well placed to win before Imola, retired dropping him back to fourth overall behind Martin O’Connell, victorious in last Sunday’s race. In GT2, Peter Muelder-Patrick Simon’s third place was good enough to clinch the trophy in their category as they beat Maurizio Fratti-Andrea Cabianca.
The final results were totally reshuffled in the Heritage Touring Cup. Although Yves Scemama arrived at Imola in the lead, he had to make do with second place overall after finishing 20th in the race. Claude Boissy and Patrick Bourguignon took advantage of his below-par performance and snatched first place overall in the general classification thanks to their second position at Imola. Ben Gill who was second before coming to Italy and finished third in the title chase.
Among the 45-cars in Sixties’ Endurance, the race led to numerous upsets in the final overall classification. Christian Dumolin-Christophe Van Riet arrived at the Italian circuit as favourites only to be excluded from the race by the stewards losing the title by one point. Andrew Beverley, third before the last round, suffered the same fate dashing his chances of a top-three finish. Pierre-Alain France-Erwin France, second before last weekend and who did not start the last event, fell back to 16th overall. The title finally went to Thomas Studer, while Grant Tromans-Richard Meaden finished third overall in the 2016 ratings.
And last but not least, Lukas Halusa in his Ferrari 250 GT Breadvan won both races in the Trofeo Nastro Rosso on the Enzo & Dino Ferrari circuit further underlining his domination after having sealed the title in the Dix Mille Tours.
A reminder that the title in Group C Racing, the last round of which was held at the Dix Mille Tours at the beginning of October, went to Eric De Doncker.
Video CER Peter Auto Imola