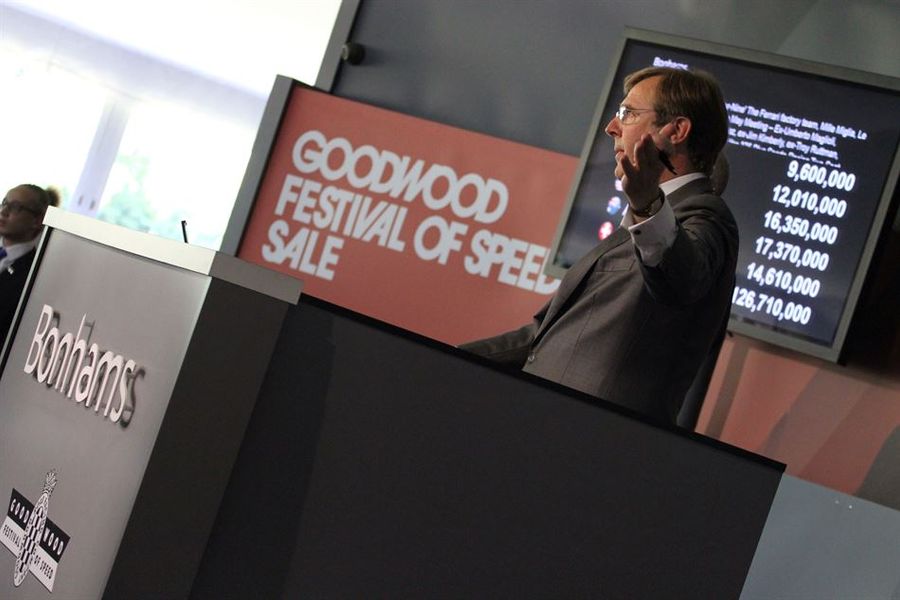 The Goodwood Festival of Speed’s annual Bonhams sale earned a staggering £22.6 million on the opening day of the world’s largest motoring garden party on Friday, June 27. The star attraction was the incredible 1954 Ferrari 375-Plus, as used in iconic road races such as the Mille Miglia, Targa Florio and Carrera Panamericana, which sold for £10.7 million following a fierce battle between bidders. A 1902 De Dietrich - formerly part of the Michael Banfield Collection - achieved at Goodwood yesterday an astounding £998,300. Few cars can have come to light as spectacularly as this magnificent veteran, which was discovered during World War Two when a German bomb demolished the stable in which it had been sleeping on blocks since 1912. With just four owners from new, the powerful four-cylinder 4078cc De Dietrich is identical in specification to the works racers built for the 1902 Paris-Vienna challenge. A Lotus 49B used to Graham Hill in the Tasman series and then taken to fourth at Monaco by Richard Attwood in the 1969 GP, Attwood's last Formula One outing, went for £673,500. Bonhams and Goodwood racing car historian Doug Nye, said: “This Sale has offered a phenomenal range of really special and important cars with their various classes. Above all, each of the prime cars offered has links with some of the greatest racing drivers of all time. Names like Jim Clark, Graham Hill, John Surtees and so many more. It’s always a pleasure to see new owners’ delight as the gavel falls. After all, they’re winners too.”