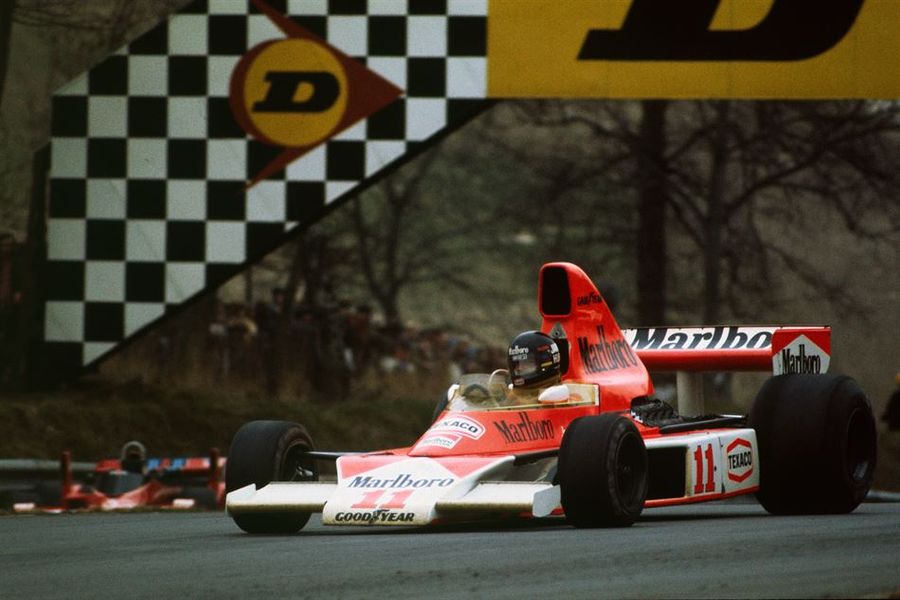 The life of James Hunt will be celebrated, 40-years after his Formula 1 World Championship success, at this year Brands Hatch Masters Festival on May 28th to the 29th, with a variety of cars from James’ racing life on display, both on and off track.
Topping the bill will be cars from his Formula One career, with the iconic Hesketh 308 being represented by the cars of James Hagan and Rick Carlino. It was Hesketh that took James into Formula One, initially driving a customer March before the 308 made its debut at the 1974 South African Grand Prix. A year later Hesketh provided James with a double success: he won the BRDC International Trophy at Silverstone in 1975 and took his first Formula One World Championship Grand Prix win at Zandvoort as he beat Niki Lauda’s Ferrari to the flag to win the Dutch Grand Prix.
From Hesketh it was off to McLaren where James won the 1976 title after a captivating season and his period with the team is acknowledged thanks to Scott Walkers McLaren M23 from his Championship winning season and Frank Lyons who brings his McLaren M26. The car was debuted during the 1977 season and whilst James didn’t enjoy the success he had achieved a year earlier, he still notched up victories at Watkins Glen and Fuji as well as a significant home win in the British Grand Prix at Silverstone.
There are other cars on display that reflect James’s varied motor sport career. Stuart Scott’s Chevrolet Camaro reflects James’s win in the 1973 Tour of Britain in which he and Robert Fearnall defeated the field in a mix of rally stages and circuit races. Although James didn’t do much sports car racing, his second place in the 1973 Kyalami 9 Hours with Derek bell is reflected by Marc Devis’s Gulf-Mirage M6, while Paul Bason’s March 712 illustrates James’s spell in Formula 2 and Clayton Kingman’s Lotus 59 is the type of Formula 3 car in which he won at Rouen in 1970.
But James began in a humble Mini and Retro F1’s tribute car, as raced in Masters Pre-66 Touring Cars by Jonathan Lewis, is the perfect way to remember a true champion.
Off track there will be the chance to see one of Hunt’s period helmets on display as well as his Fuji winning trophy from 1976 – the new James Hunt Bookazine will also be available for sale during a signing session with Freddie Hunt on Sunday afternoon.
Fans are being encouraged to get involved, too. In addition to the static car display, there will be a picture board allowing fans to bring their own photographs of James Hunt giving an added dimension to this memorable occasion. Fans are asked to tweet their memories or photos to @mastershistoric using the #jameshunt
“Brands Hatch was a significant part of James Hunt’s motor racing career,” says Rachel Bailey, Masters Historic Racing’s Event Director, “and we are pleased to be able to remember him and his achievements in this way. The event will be a great weekend for fans of the sport as well as those who had their interest and passion for motor racing ignited by James Hunt.”
Brands Hatch Masters Festival Hesketh 308 Formula 1 World Championship James Hunt