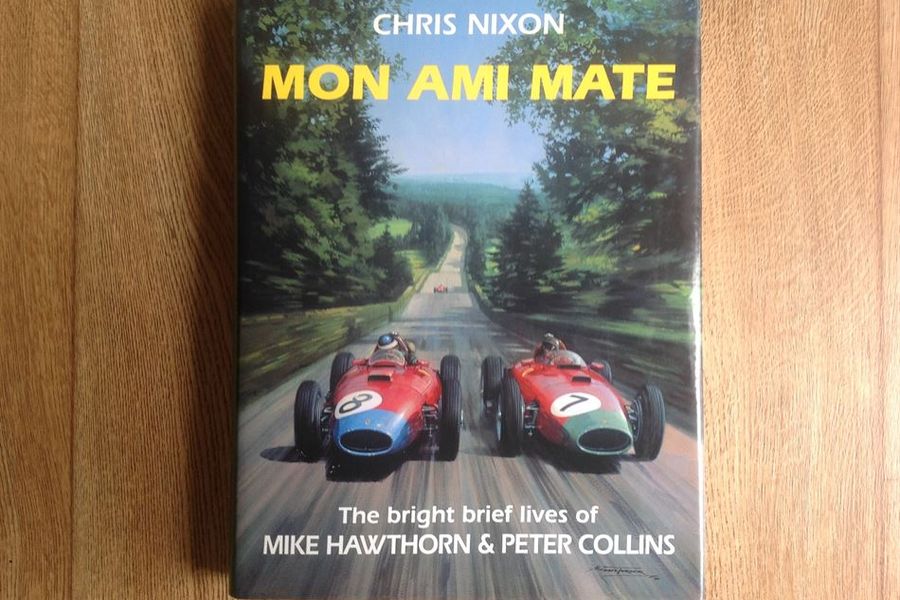 We were delighted to discover that a book that is a prized part of our collection is now again available in a new reprint - Chris Nixon’s classic ‘Mon Ami Mate’, the story of friends and racers Peter Collins and Mike Hawthorn.

First published in 1991 and then reprinted in 2001, the comprehensive 377-page tome looks into the lives of Collins and Hawthorn in no holds barred depth up to their final two seasons together racing for Ferrari. It is amply illustrated and even goes in some detail into Hawthorn’s involvement in the 1955 Le Mans crash, and also into areas motorsport biographies seldom stray into when detective work by Nixon brings to light an illegitimate son of Hawthorn’s.

While Hawthorn had been written about before, and produced two autobiographies, Collins was less well remembered before this book, but having gained access to his father’s unpublished memoirs and with help from his widow Louise, Nixon is able to bring him fully to life. When Collins was killed at the Nurburgring in 1958 Hawthorn was shattered by the loss of the man who had become his great friend, but raced on to to narrowly claim that season’s Formula One title, only to die himself just months later in a road accident.

At £59.99 it is not the cheapest book you will ever buy but in reading it you can see the work that Nixon put into it with interviews from many who knew the subjects, and with older editions having sold on Ebay at higher prices, some might see the new reprint as a bargain!

The reprint is available from leading motorsport book sellers.