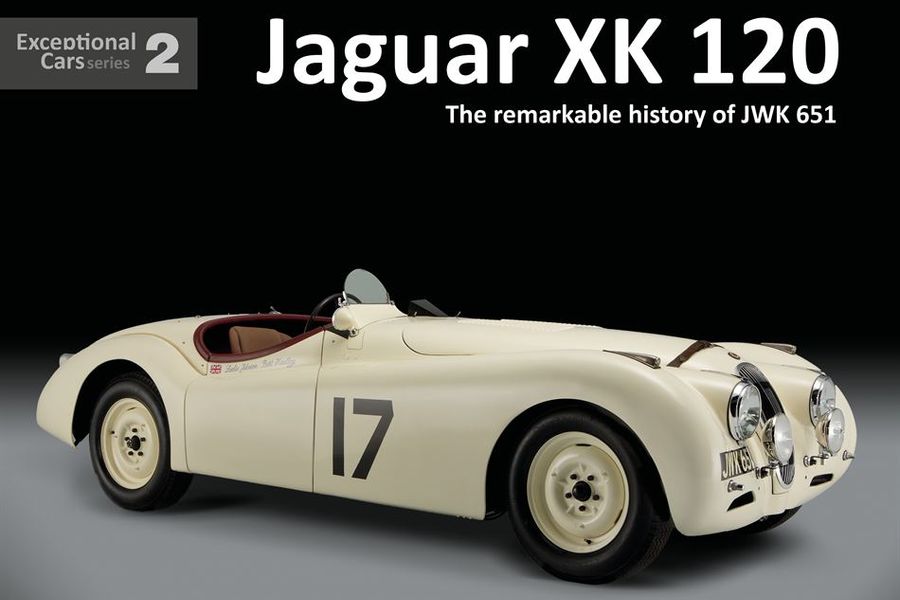 Chas Parker and Philip Porter’s new book tells the story of one of the six alloy-bodied XK 120s that were prepared by Jaguar in 1950 for racing and rallying. This particular Jaguar, known as JWK 651 due to registration number it has carried since new, was owned by Leslie Johnson and raced by him in some of the most prestigious events of the time, including the Le Mans 24 Hours, twice in the the Mille Miglia and the Tourist Trophy at Dundrod. Beyond that, Johnson and up-and-coming Stirling Moss visited the speed bowl at Montlhéry, near Paris, for a record-breaking attempt and Johnson also took part in the RAC Rally.
JWK 651 made its competition début on the 1950 Mille Miglia coming home in a superb fifth place for Leslie Johnson and John Lea, beaten only by three Ferraris and a works Alfa Romeo driven by Juan Mnauel Fangio. The Jaguar performed strongly at Le Mans that year, driven by Johnson and Bert Hadley, the car lay in second place after 15 hours and was gaining on the leaders when the clutch failed.
While Stirling Moss won the 1950 Tourist Trophy race at Dundrod, in Northern Ireland, in another alloy-bodied XK 120, Johnson finished seventh on handicap to help secure the team prize for Jaguar. The pair joined together at Montlhéry in October later that year, Johnson and Moss averaging 107.36mph for 24-hours while in March 1951 Johnson returned to achieve 131.83mph in one hour.
A final flourish in 1952 brought another Mille Miglia appearance, which ended in retirement, and an outing on the RAC Rally of Great Britain that saw Johnson reach third place before dropping back to 16th by the end.
The 128-page book contains over 120-illustrations combining a wealth of period photographs as well as a portfolio of studio images.
The Co-authors: Chas Parker is a long-time motor racing enthusiast who has written nine books, including co-authorship of the Jaguar C-type and D-type volumes in the ‘Great Cars’ series. Philip Porter, who is also the book’s publisher, has written over 30-motoring titles, many on Jaguar subjects, and twice won the Montagu Trophy awarded by the Guild of Motoring Writers for the best book of the year. His work includes Jaguar E-type – The Definitive History, Ultimate E-type and a Lightweight E-type title in the ‘Great Cars’ series.
Jaguar XK 120 - The remarkable history of JWK 651, is published this month and available from Porter Press at a price of £30.
Jaguar Book Book Review Review Porter Press XK120 Le Mans