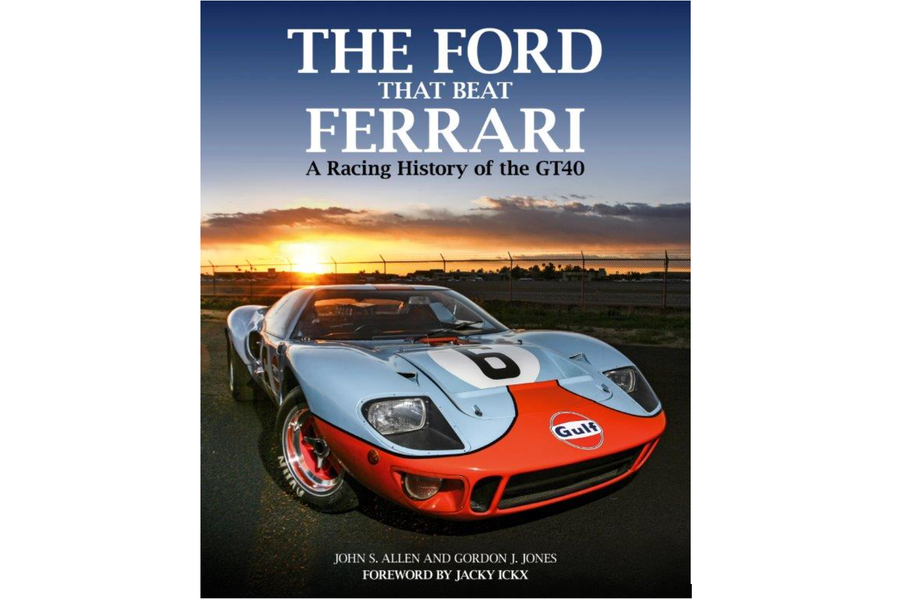 This third edition of The Ford That Beat Ferrari, A Racing History of the GT40 by John S. Allen and Gordon J. Jones sees the book updated from its last edition 14 years ago to offer a comprehensive look at one of the 1960’s most iconic sportscars.

This edition of a book tells the story of the Ford GT40 through a remarkable array of over 850 period photographs, many of them in colour. After Ford unsuccessfully attempted to buy Ferrari in 1963, the American car giant instead embarked on its own racing programme in a bid to beat the famous Italian marque at the world’s most prestigious race, the Le Mans 24 Hours, as told in the forthcoming Hollywood movie Ford v. Ferrari.

The mission was eventually accomplished: Ford’s challenger in this battle, the GT40, finished 1–2–3 at Le Mans in 1966 and won for the next three years as well. This book, originally published in 1985 and redesigned in 2005, is now available again due to popular demand, with further revision to keep the information up-to-date.

Areas covered in the extensive text include:
- Development of the GT40: how the prototype Ford GT emerged in 1964 from the previous year’s Lola GT programme.
- The works teams and the GT40: the car’s racing exploits in its earlier years, first with Ford Advanced Vehicles (1964), then Shelby American (1965) and Alan Mann Racing (1966).
- The big ones: this section of the book covers the GT40’s evolution into the 7-litre monsters that brought enormous success, including the first two Le Mans victories with the Mark II (1966) and Mark IV (1967), before becoming outlawed by new restrictions on engine size.
- The Gulf years: against all expectations, the venerable GT40, now back to 5-litre power, raced on with John Wyer’s crack JW Automotive Engineering outfit in the iconic blue and orange colours of Gulf, successes including two further Le Mans wins (1968 and 1969).
- The production line racer: the stories of the 68 privateers, big and small, who raced GT40s.
- Chassis and drivers: a data section giving resumés of type designations, chassis histories and all drivers who raced GT40s.
- The magic lives on: the book’s concluding sections show surviving cars at differing stages in their later life and bring the story up to date with developments since the 2005 edition.

John S. Allen and Gordon J. Jones are long-time enthusiasts with an over-riding passion for the Ford GT40 and other great cars from the golden era of endurance racing that inspired them when young. Besides their long-term collaboration on this book, they have independently contributed to numerous magazines over the years, and now, ever indefatigable, both continue to work on new books. Both live in France, respectively in the Deux Sèvres and Charente-Maritime areas.