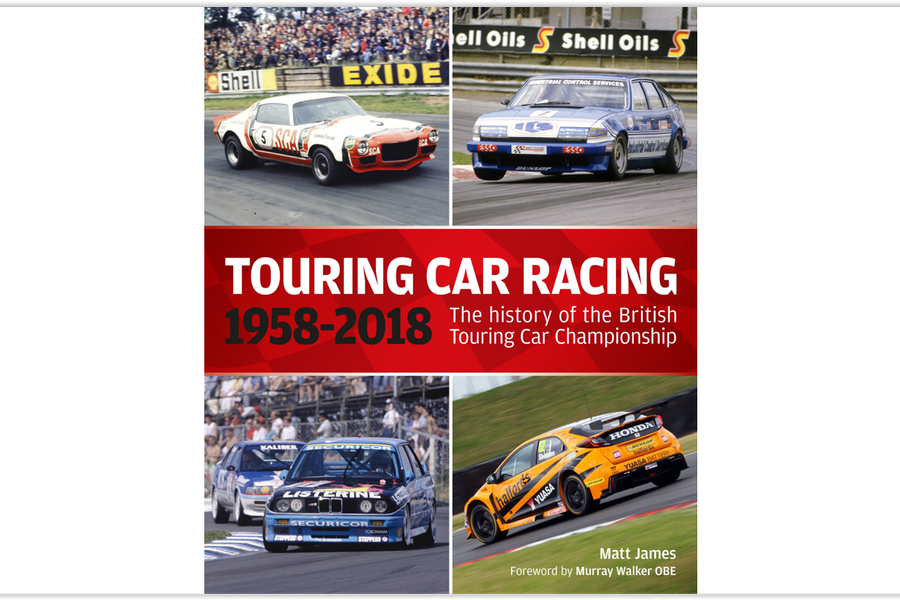 There are some books that you simply cannot put down and end up reading from cover to cover in a single sitting. This is not that kind of book, and all the better for it, because you can dip in and out of this excellent tome without losing the plot or your own focus.

The sixty year lifespan (so far) of the British Touring Car Championship, initially known as the British Saloon Car Championship – the name changed in 1987 – means that almost every aspect of the championship has evolved. The cars, drivers and circuits are all different, with Brands Hatch, Silverstone et al scarcely recognisable now from their ‘60s and ‘70s incarnations. Only Goodwood, unsurprisingly, looks the same.

Right from the coverage of the first year there is a wealth of thought provoking photographs, with an excellent photograph of Tommy Sopwith’s Jaguar Mk1 leading Mike Hawthorn’s similar car at Silverstone at The International Trophy meeting in 1958, cars absolutely on the limit through Copse Corner. Poignantly this was to be Hawthorn’s World Championship year but he would die in a road accident in this very car just eight months later.

Whilst acknowledging that regulation changes will always shape the cars in the series, it is fascinating to see the evolution of the cars. In the early days cars were (or at least appeared to be) standard. We now know that Hawthorn’s Mk1, though built by Jaguar’s Competitions Department fundamentally as a road car for the ‘Farnham Flyer’, had many parts, including the engine, from the spectacularly fast C Type, was purported to be standard at the time.

The cars of the eighties, whilst being built as out-and-out racers, still had very obvious production roots, with Rovers, Toyotas and BMWs featuring.  Even the fearsome Ford Sierra Cosworth 500s look relatively mundane.

It is fascinating to look at photographs of what we would now call pre ’66 grids and compare those with photographs we see of modern ‘historic’ touring car racing.  Modern Cortinas, Imps and A40s sit low to the ground on big fat alloys with the driver seated almost on the floor to keep the centre of gravity down. In Matt James book you can see the real McCoy, with the cars of the late fifties and early sixties on skinny tyres, standard seats and no roll cages or safety equipment. Not better or worse, just different.

The book also shows the advent of sponsorship in the early seventies right up to today’s mobile billboards.

Author Matt James stays subjective throughout, resisting the temptation to highlight personal favourites with ‘those were the days’ pieces but instead dealing in facts and statistics.  Indeed the index at the back of the book is a research work in itself, cataloguing championship positions throughout the sixty years.

The book is as much a retrospective on the British racing scene over the last sixty years as is it a specific view of the championship, and is all the better for it.  There is much here for the historic racing fan and we are sure that people who enjoy HistoricRacingNews.com will thoroughly enjoy thumbing through this book.  The fact that it is a book which is easy to come back to time and time again is very much in its favour.