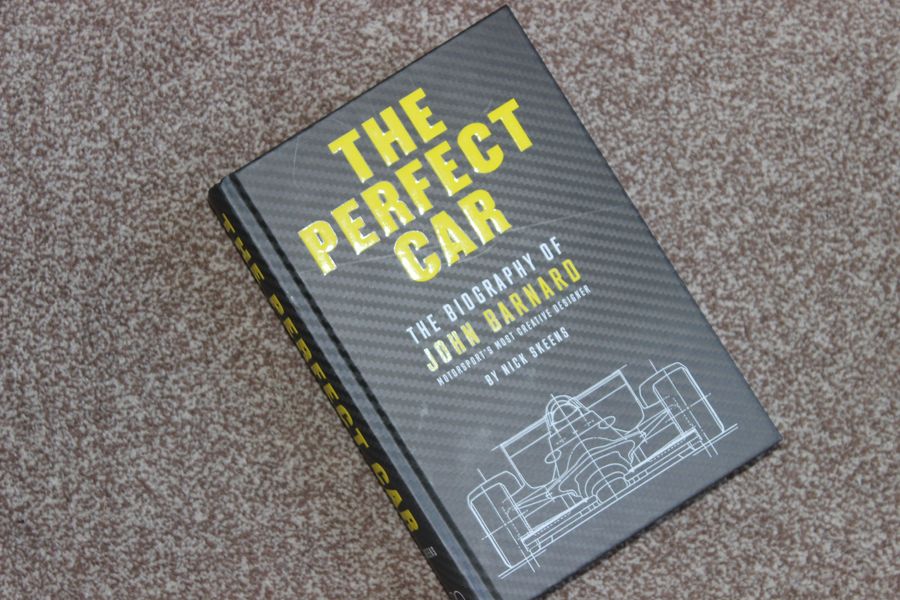 The Perfect Car is by any way of measuring it a mighty tome, almost 600-pages looking in depth at the life and career one of the most innovative race car designers in the history of the sport - John Barnard. Written with the support and blessing of Barnard, Nick Skeens’ book is very much a warts and all look at a man willing to take his work in a totally new direction if he thought it would bring rewards, working to the highest of standards and expecting that from those working around him and yet a man who would go home for lunch most days and more than once declined moves to work abroad as it would take him away from his family.

There is no doubting Barnard’s unparalleled ability to treat almost any design issue as a blank paper exercise and not feel constrained by what countless others had done before and just the headline list of his many innovations is impressive. The first successful full carbon-fibre monocoque while at McLaren and the introduction of the  semi-automatic gearbox with Ferrari are well known, but his eye for simplicity and combining form and function went all the way down to suspension mounting points, bodywork clips and many other small but crucial details that became standard across Formula One and other forms of motorsport.

Skeens does not have a motorsport background but comes from the world of design, his first knowledge of Barnard coming from a discussion that started with an innovative (naturally) table design Barnard worked on after Formula One. For all of that Skeens’ ability to convey the complex world of Formula One design, technology and even politics is admirable, we only caught him out on a couple of very minor points and were being picky at that!

It is that knowledge of the design process that makes the book really interesting as you get an insight into the thinking behind each development, plus a feel for the the sheer hard work involved in developing a concept that may seem simple and obvious in retrospect but a pressured design team have had to evolve from scratch.

Barnard’s career moved from McLaren in the early 1970s to then to designing what is felt by many to be the best looking Indycar of all, the successful Chaparrel 2K, through to more well-known stints at McLaren and Ferrari. The book looks not only at the design process but also at Barnard’s personal relationships within those companies and gives a sharp insight into the complex world of motorsport politics and business, with promises of resources and control sometimes made and then quietly forgotten, credit not always being given to the right person and contracts being open to ‘reinterpretation’ at a later date – to the disappointment of Barnard who was always focused on making the car going as quick as it could and the racing aspect of the sport.

We thoroughly enjoyed the book – a quick proviso here being that we do rather enjoy the deep layer of detail that Skeens superbly managed to extract from Barnard – and the subject’s level of honesty (he doesn’t always come out in the best light in certain situations) and recall of detail is to be admired. You read it and realise how much more Barnard contributed to the development of the sport than you knew before, and have to admire a man who would put in the hours to produce his complex and groundbreaking designs – and still be grounded enough to keep his family to the fore through his life.

In fact, if you want an endorsement of the book, this review has come out way later than we intended as we enjoyed the it so much we were reading it for pleasure rather than skimming it to fire out a quick summary!

The Perfect Car is available from www.evropublishing.com.

One to Watch - Uppity, the Willy T Ribbs Story