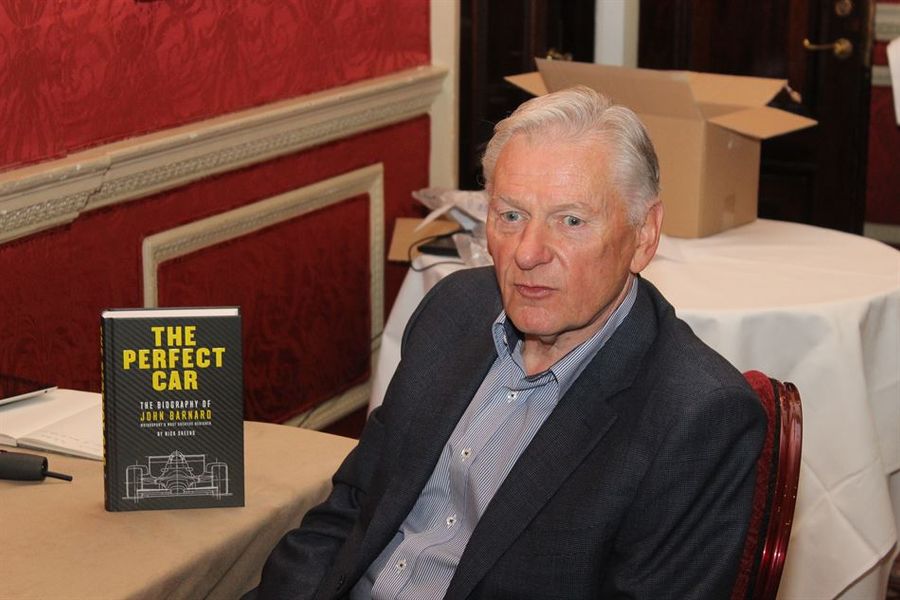 A new biography of John Barnard has been published, looking at the life of the man who revolutionised Formula 1, and motorsport as a whole, through his unrelenting quest for perfection in racing car design. Written with Barnard’s cooperation and with input from dozens of associates, drivers and rivals, this biography tells the entire story, both personal and professional, of a British design genius.

The tale of man who brought carbon-fibre monocoques, semi-automatic gearboxes, single-post rear wings and was the first to use steering wheel counted controls is told in a mighty 590 page plus tome written by Nick Skeens and covers Barnard’s varied career including:

- American interlude: F1 design with Parnelli, for the VPJ4 driven by Mario Andretti, then Indycar success with the sleek Chaparral 2K that brought Johnny Rutherford victory in the 1980 Indianapolis 500 and that year’s championship title.

- Teaming up with Ron Dennis to achieve glory at McLaren, with 31 Grand Prix wins and three World Championship titles, for Niki Lauda (1984) and Alain Prost (1985–86), while introducing aerospace technology to F1. It was here that he developed his fearsome reputation as the sport’s ‘Prince of Darkness’.

- Enzo Ferrari decided he needed Barnard, who achieved the unthinkable when he refused to relocate to Maranello and instead set up his own Ferrari facility near Guildford — with the added benefit that he could go home for lunch.

- After four years with Ferrari (1986–90), Barnard moved to Benetton (1990–91), where his general upgrade of design philosophy and build facilities helped give Michael Schumacher his first F1 win.

- Ferrari, having slumped without him, enticed Barnard back for another four-year stay (1992–96) that laid the foundations for the all-conquering Schumacher years.

- Subsequent F1 work with Arrows and Prost, plus a foray into MotoGP motorcycle racing — and indulging his passion for furniture design.

Author Nick Skeens started writing about creativity for the Design Council with publications on subjects ranging from design education to creative thinking. He is the co-author of Future Present (2000), Creative Island (2002) and Creative Island II (2009), books that celebrated British design genius by focusing on creative process. Before this he was a news editor and producer for ITN and GMTV. A freelance journalist, he lives on a barge in Burnham-on-Crouch, Essex, that he designed and helped build.

From EVRO Publishing, e have an advanced copy and will be bringing you a full review shortly.