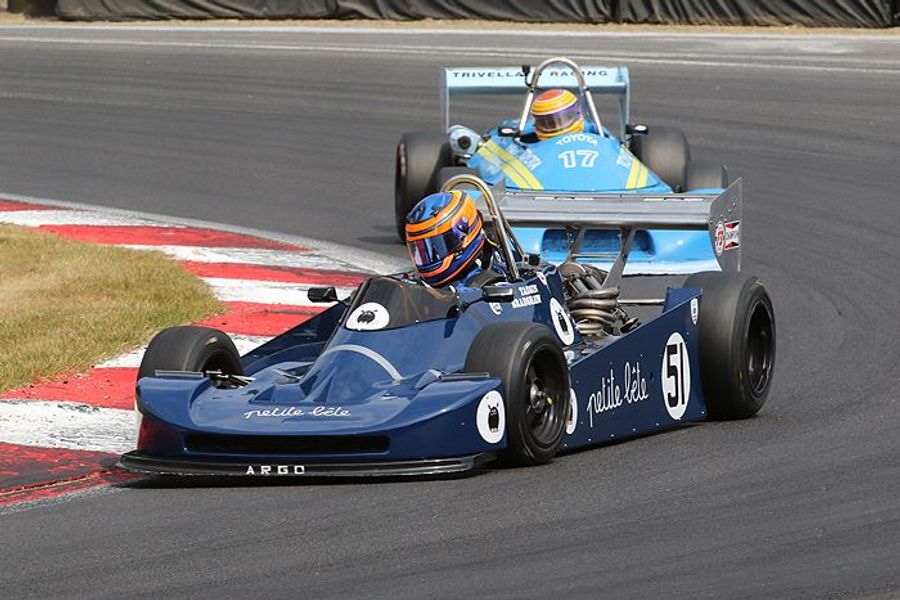 Run in hot and sunny weather and in front of an appreciative audience, the weekend was typified by exciting races run in a genuinely sporting atmosphere. As ever, drivers relished the chance to tackle the fabulous Grand Prix circuit.

The weekend featured many mighty performances and one of the best came in the second Classic Formula 3 Championship race as a strong European contingent helped to produce a stunning grid of more than 30 cars. From 25th place on the grid after an electrical problem in the opening race, Tom Bradshaw stormed through the field in his ex-Tassin Argo JM6 to win in style from Simon Jackson (Chevron B43). In the first race David Shaw (ex-Piquet Ralt RT1) fended off the later RT3 of Ian Jacobs.

Michael Lyons was one of several double winners, with a commanding brace of victories in the Derek Bell Trophy in his Lola T400. While Lyons set a stunning pace at the head of a bumper field, a fine contest for second raged in both races and thrilled the fans as the Formula 5000s of Neil Glover (Chevron B37) and Greg Thornton (Surtees TS11) battled mightily with Mark Charteris (F2 March 742) and Matt Wrigley (F Atlantic March 79B). Eventually, Glover and Thornton took a second place each as Charteris headed the 2-litre cars and Wrigley twice topped an encouraging contingent of ten Formula Atlantic cars.

Another double winner was the evergreen John Burton who dominated the Pre ’80 Endurance races in his Chevron B26. While Burton romped clear, Nick Adams (March 717), Kevin Cooke (March 75S) and John Spiers (Osella PA3) all had podium finishes as the 1970s sports-racers made a great sight and sound.

Both Historic Formula 3 Championship races quickly developed into two-way tussles between Jon Milicevic (Brabham BT21B) and Andrew Hibberd (Brabham BT18). Eventually the score was one-all as each driver hit problems in one of the races. Hibberd was slowed by a carburettor problem in the first race and Milicevic was sidelined by a broken rocker in the second race, which brought his 2018 winning sequence to an end.

Welcome guest races from the Historic Grand Prix Cars Association brought out two excellent grids, split at 1961. There were double wins for Jon Fairley (Brabham BT11/19) and Geraint Owen (Kurtis 500 Indy Car). Peter Horsman (Lotus 18/21) chased Fairley on Saturday until a backmarker cost him any chance of challenging. On Sunday, Horsman spun into Druids on the first lap and later retired when the throttle stuck open. However, Owen had to keep pushing to hold off the flying Will Nuthall in his father’s Alta after a spectacular drive to wrestle the car ahead of Rod Jolley’s Monzanapolis Lister Jaguar. 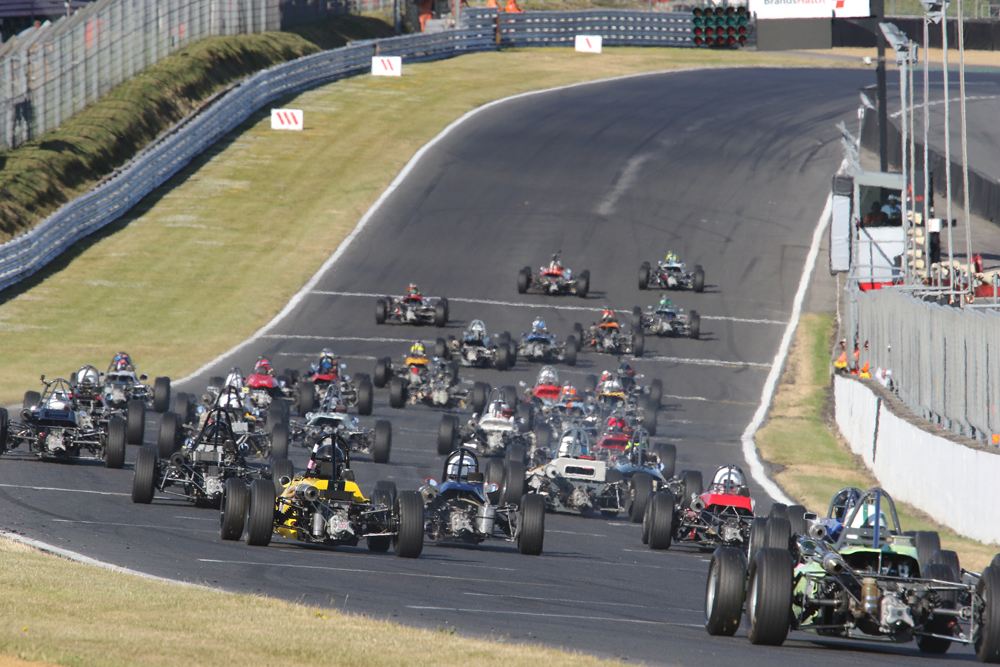 Richard Tarling swept ahead to win on Saturday when Mitchell and Jackson went off together with two laps to go. With a lap and a half to run, they went two wide into Dingle Dell, and Jackson went over the kerb and bounced towards Mitchell. Both cars went through the gravel as Tarling swept past. However Jackson and Mitchell recovered for second and third before Callum Grant arrived in fourth.

Sunday’s race was just as exciting as Mitchell claimed his fifth win from 10 races to retain the overall title lead. Jackson started best and was trying to build his advantage when he used too much kerb at Stirlings on the second lap and the Lola spun down to seventh. Jackson charged back into contention to rescue second place, but Mitchell had gone clear to take a classy win.

Mark Charteris (Mallock Mk20/21) dominated a re-started Classic Clubmans race as John Harrison chased. Adam Paterson (Mallock Mk16) headed the B class pack and Jonathan Loader (Tiga SC80) was top of a five-strong Sports 2000 class.
Chris Goodwin scored a first Formula Junior win in his Lotus 22 as a safety car period helped him edge away from Peter Morton’s Lightning Envoyette. When Morton was boxed behind a lapped car at the re-start, the matter was put beyond doubt. Peter de la Roche completed the podium while Andrew Tart (Bond) led the front-engined cars.

Finally, a strong Historic Saloon field delivered an excellent contest as John Spiers and Philip House went head-to-head in Lotus Cortinas. Spiers set the early pace but House chipped away and was narrowly ahead at the flag. Behind Richard Belcher’s Cortina, Mark Watts fended off Alex Thistlethwayte to top the Ford Mustangs. 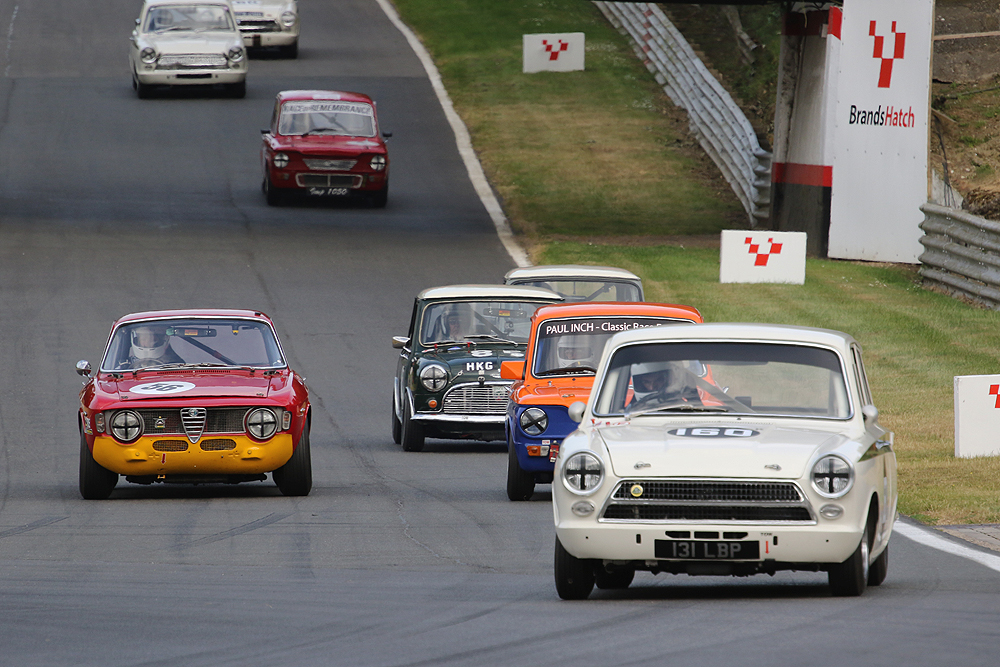