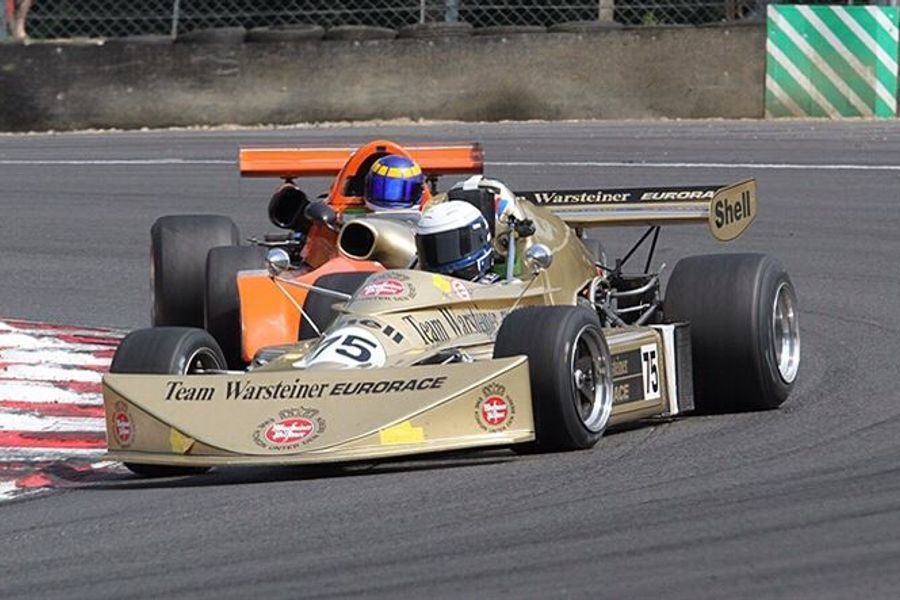 The Historic Sports Car Club will run its 25th consecutive Brands Hatch Historic Super Prix on the fabulous Grand Prix circuit at the Kent venue over the weekend of 12/13 July. The chance to race on the famous three-dimensional track has drawn a fabulous 350-car entry for the two-day, 18-race event. Headline races include Historic F2 and Martini Trophy, both with strong grids, while the biggest field of Formula 5000s for several seasons will pack out an over-flowing grid for the pair of Derek Bell Trophy races. Thirteen of the monster 5-litre single-seaters feature in a 36-car entry and include category pacesetter Michael Lyons in a rare McRae GM1 from his father’s stable. Period F5000 racer Ian Ashley should make his return to F5000 in a Lola T300, while Historic F3 race winner Dean Forward joins the entry in a Lola T400. From the 2-litre ranks comes Andrew Smith (March 742) as a potential pacesetter, while the evergreen Ian Flux will be racing Mike Smith’s March 79B. Adding to the prestige of the DBT races will be Australians Martin Bullock (Chevron B17) and Roger Oliver (Brabham BT30) and New Zealander Phil Major (Brabham BT35). Other long-distance entrants include Hong Kong-based Dan Pyett (Tecno), Poland-based Daryl Taylor (Chevron B24) and Swiss racer Bruno Huber (Argo JM1). Two races for the HSCC’s Martini Trophy will recreate a golden era of 1970s sports car racing made famous in the European 2-litre Sports Car Championship. Donington winner Ian Flux (Osella PA3) heads the entry and it is the class B (non-winged) cars of Martin O’Connell (Chevron B19) and Robert Oldershaw (Lola T212) that could deliver the biggest challenge to ‘Fluxie’. New to the series is the Lola T292 entered for Formula Junior ace James Claridge. The HSCC Historic Formula 2 Championship is a truly pan-European series and the Super Prix marks the only UK races of the 2014 schedule. After six of the 12 races, defending champion Robert Simac has a healthy lead in the points’ table after six straight class wins in his 1600cc March 712. Mark Dwyer (March 742), Jamie Brashaw (March 782) and Philip Hall (March 752) are among the likely overall front-runners. A round of the Historic FF2000 Championship will run for the John Taylor Memorial Trophy. Taylor, a category racer and a prime mover behind the Historic FF2000 Association, recently suffered a major stroke and passed away. His competitors have dedicated this race to a popular man who did much to help the category develop. Benn Simms (Royale RP30) and Graham Fennymore (Reynard SF81) head the entry. A great field of production-based sports cars from the 1950s and 1960s will line up for another joint venture between the Historic Road Sports Championship and the FISCAR movement for 1950s sports cars. Meanwhile, Oliver Ford heads the field for the HSCC 70s Road Sports Championship and will be gunning for another victory for his Lotus Europa. The Millers Oils Formula Junior Championship heads to Brands Hatch for round nine of 16 with defending champion Mark Woodhouse (Elva 100) and Andrew Taylor (Cooper T56) level on 54 points. However, former champion Jon Milicevic (Cooper T59) is rapidly fighting into contention after missing the opening three races of the season. David Methley (Merlyn Mk14A) could well make it three Historic F3 Championship wins on the bounce against the challenge of Frenchman Francois Derossi (Chevron B17), while a gaggle of rapid Brabhams will be chasing podium finishes in the hands of Jim Blockley (BT21B), Peter Thompson (BT21), Mike Scott (BT28), Jim Timms (BT21B) and Swedish commuter Leif Bosson (BT28). An over-flowing Guards Trophy field will compete over 40 minutes on Saturday, while the Super Touring Trophy has a race each day with James Dodd (Honda Accord) and John Cleland (Vauxhall Vectra) to the fore. Older Touring Cars will compete in a round of the ByBox Historic Touring Car Championship. Rounding out an exceptional weekend will be races for the Classic Racing Car Championship, the Classic Formula 3 Championship and the Historic Formula Ford Championship. Saturday starts with qualifying at 9am and the first of eight races will be at 13.10. On Sunday, qualifying is from 10am, with the first of 10 races at 12.10.