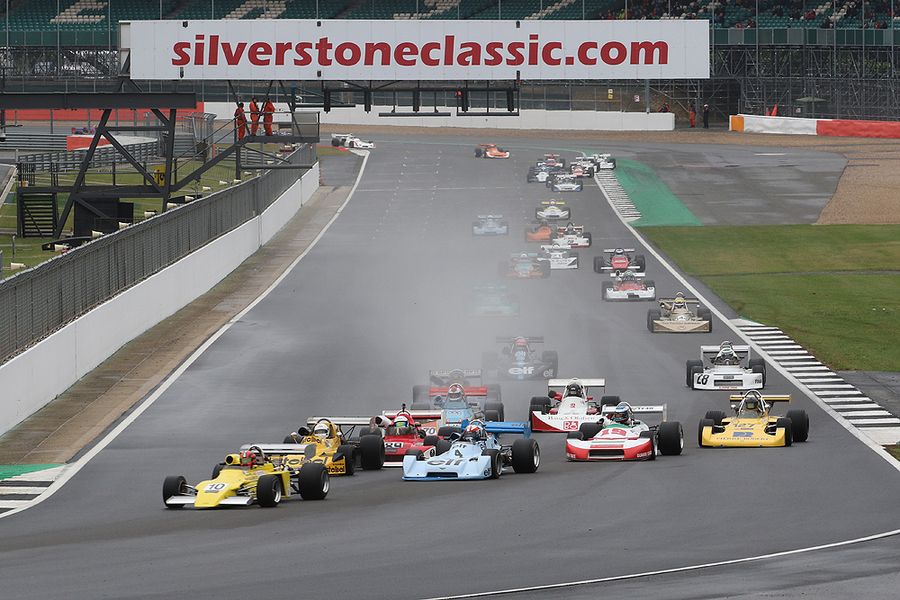 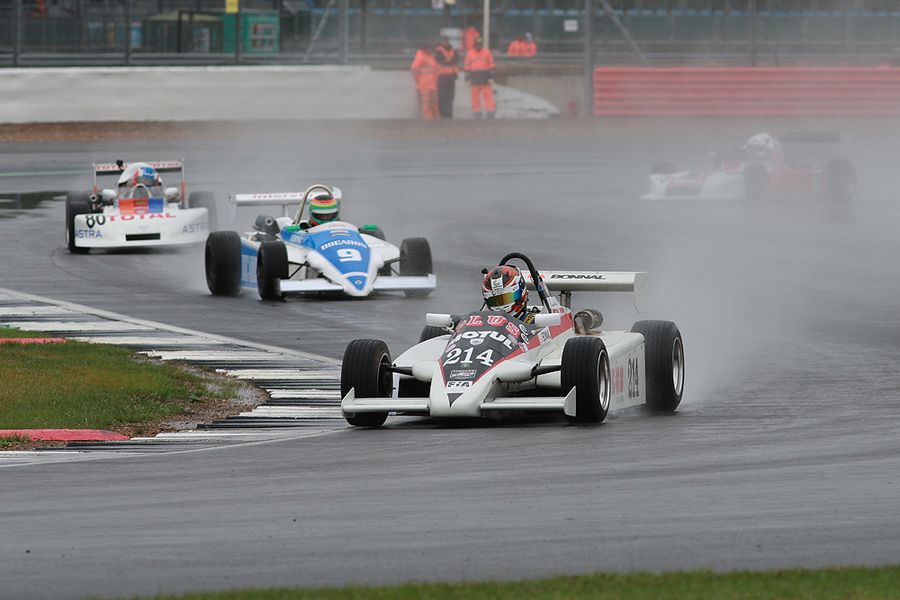 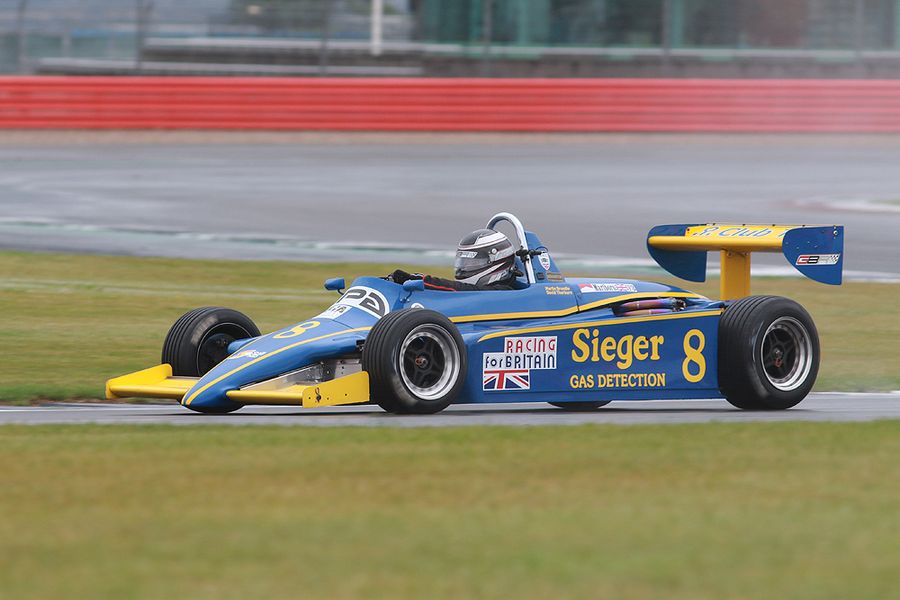 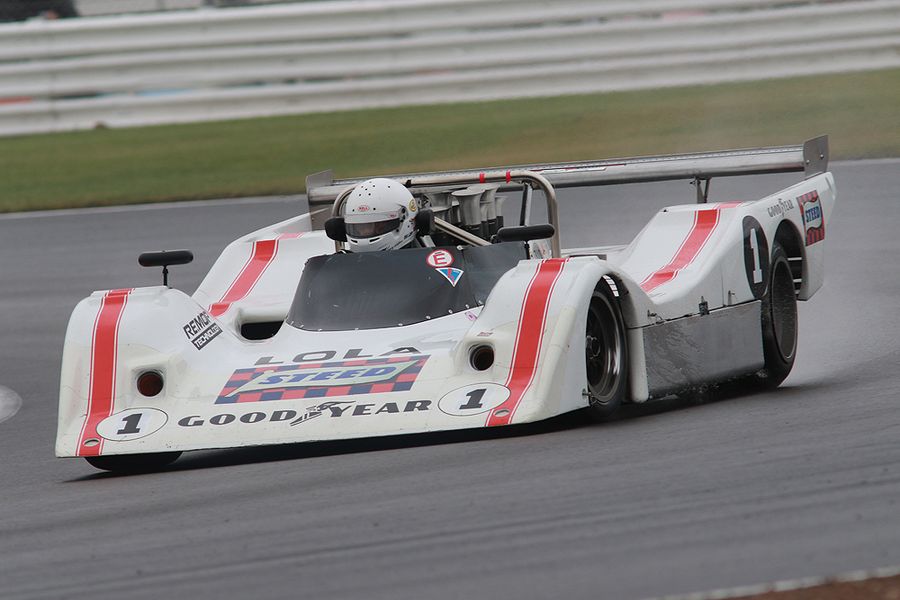 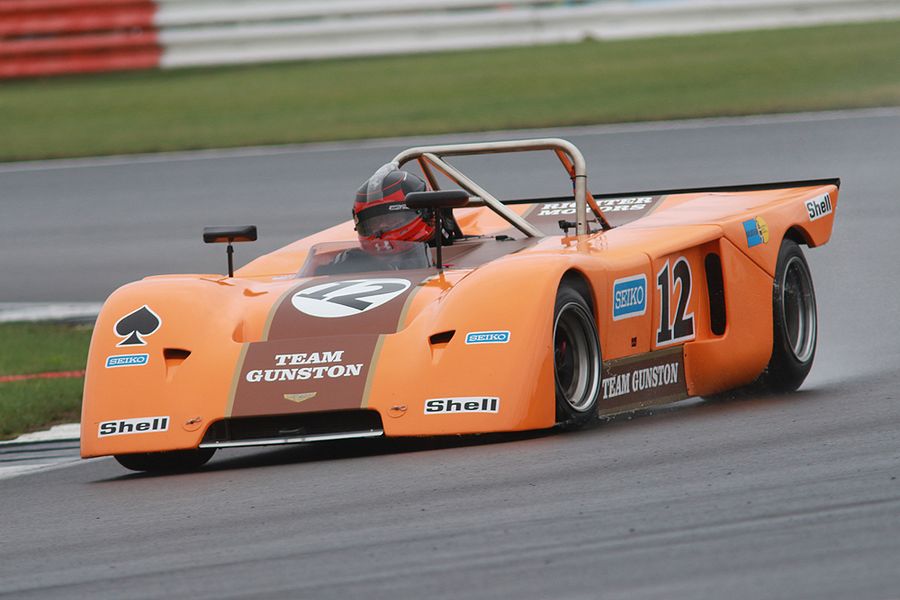 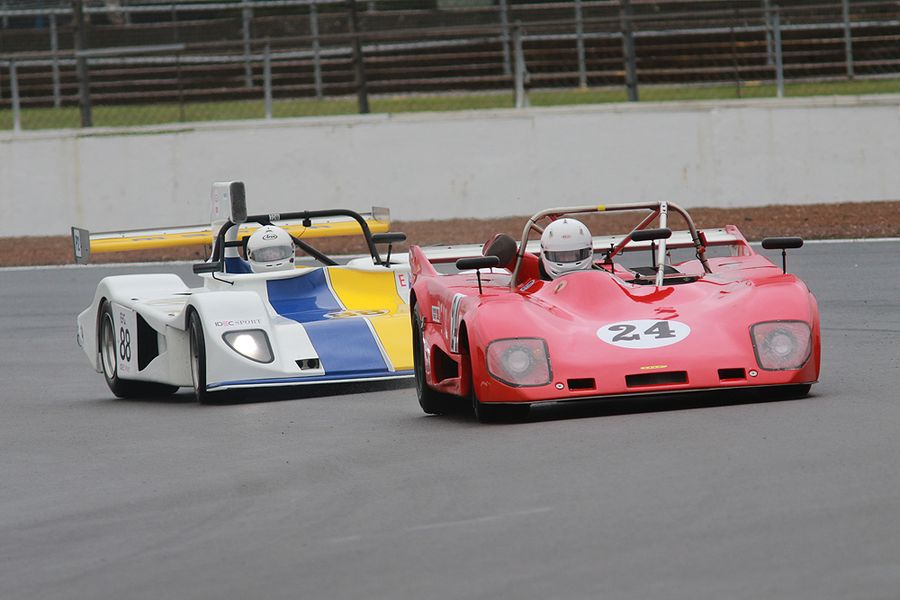 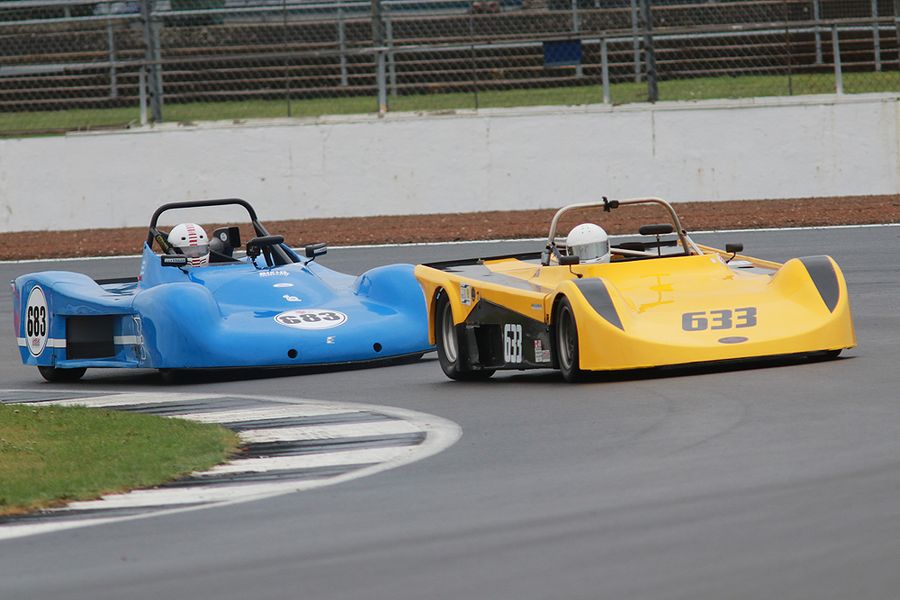 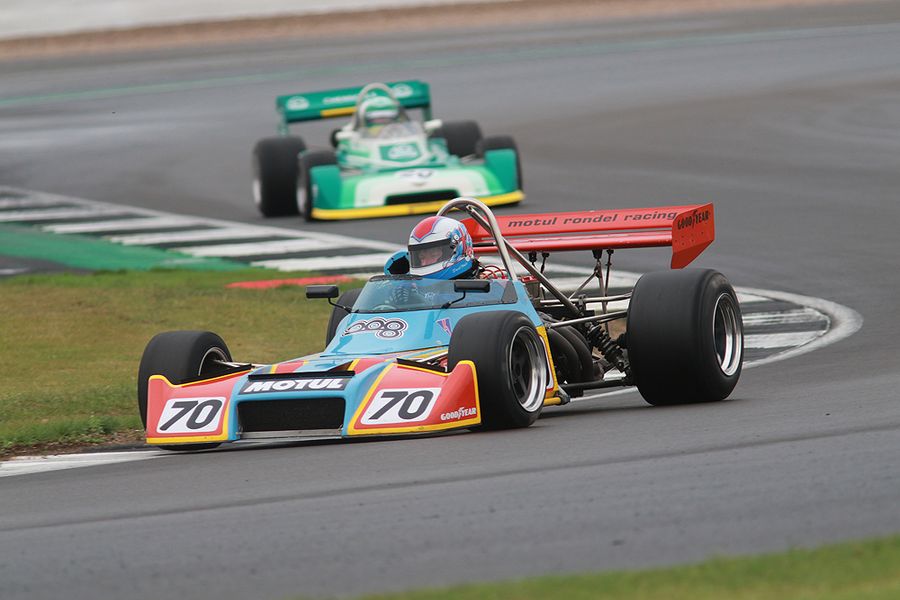 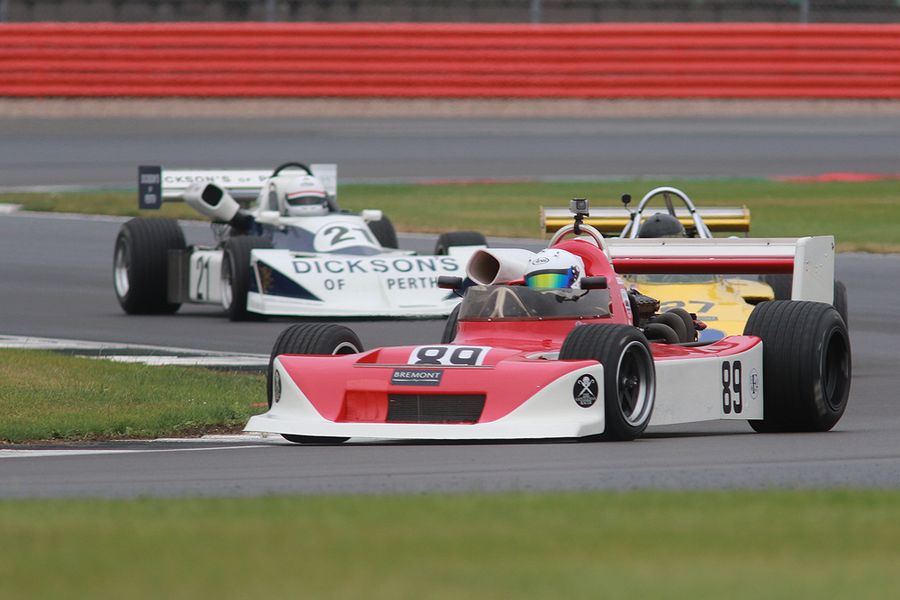 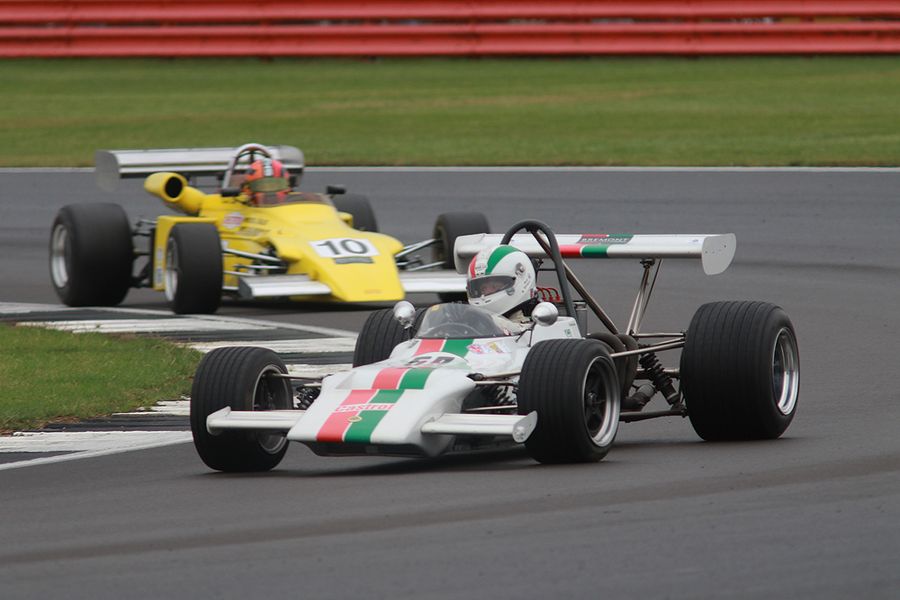 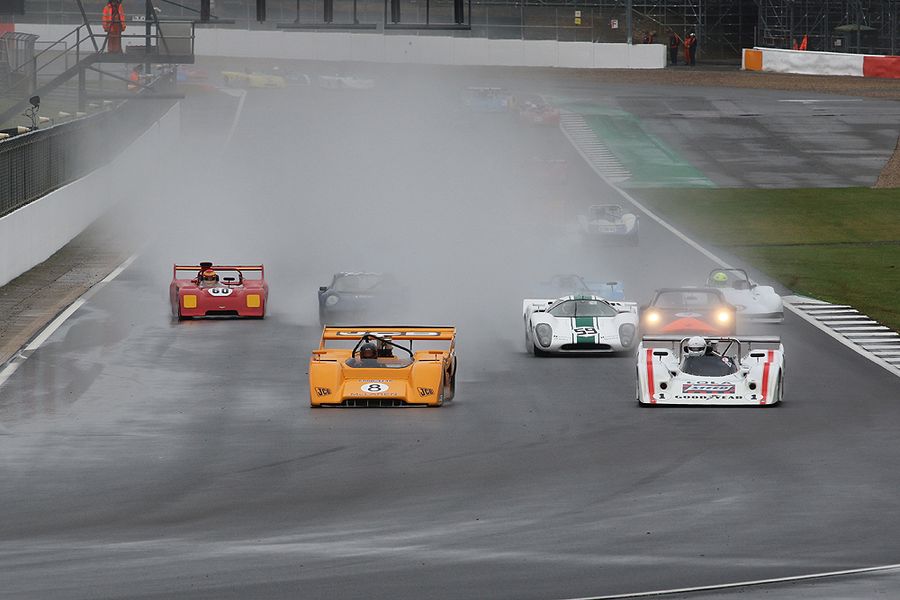 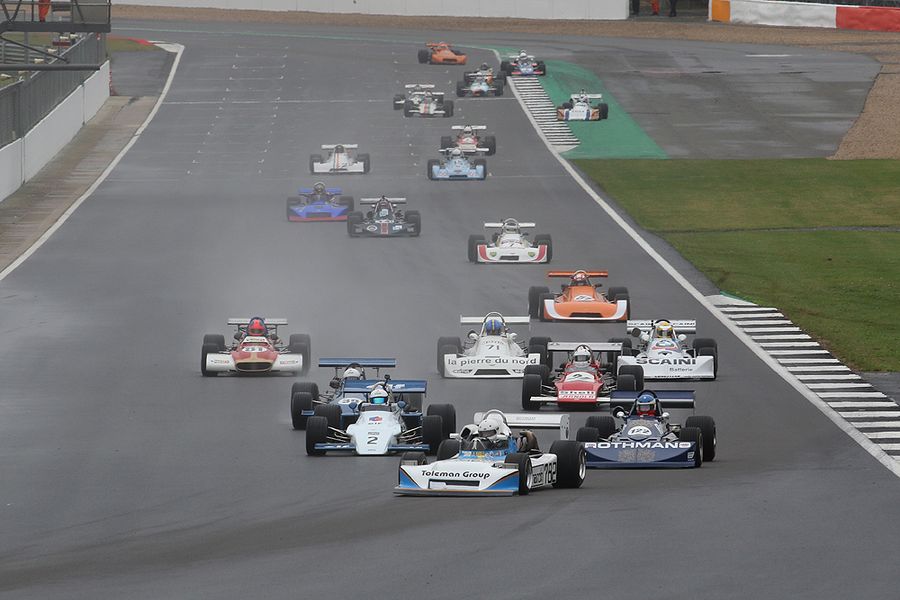 Three categories from the Historic Sports Car Club played prominent roles in the racing element of the Silverstone Classic over the weekend, topped by a record-breaking field for two rounds of the HSCC  Historic Formula 2 FIA International Series.

Historic Formula 2
The sensational Historic Formula 2 pack had the worst of the wet weather on Saturday morning for the opening race but still delivered a stunning race as Miles Griffiths (Ralt RT1) held off a fierce challenge from Martin O'Connell and Darwin Smith.

From the start, Matthew Watts (March 772) leapt ahead but ran wide into the loop on the first lap and dropped well down the order. Griffiths took over and soon had O’Connell (Chevron B40), Darwin Smith (March 722) and Andrew Smith (March 742) going with him as battles raged all down the field despite challenging conditions and limited visibility in the spray.

After a brief safety car period, O'Connell turned up the pressure on Griffiths even more but the Ralt driver held on well and then O’Connell had a high-speed spin on the exit of Copse. Darwin Smith was right on his gearbox at the time and did well to avoid the Chevron as the moment gave Griffiths a little breathing space. Andrew Smith had a quick spin at Stow but recovered to claim third before O’Connell got back to fourth as David Tomlin (Rondel) and Neil Fowler (March 782) both had strong races to round out the top six. “I knew Martin would always be difficult,” said Griffiths after a fine race.

Marc Mercer was top finisher in the Vern Schuppan Trophy for the earlier Formula Atlantic cars and his March 73B was the first car home after a gaggle of 2-litre F2 cars, while making it a good day for the Mercer family was his father David (March 78B) who topped the Villeneuve Trophy for the later Atlantics.

In the Jochen Rindt Trophy for the 1600cc F2 cars there was a rare defeat for Robert Simac (March 712) as he was pushed back to third by Martin Bullock (Chevron B17C) and Julian Stokes (Tecno). With a total of 47 finishers, it was an impressive display from the Historic F2 pack in horrible conditions.

Sunday morning dawned wet but there was no rain falling in the build-up to the second Formula 2 race, so the big debate was over tyre choice. Most opted for wets but several bold decisions were taken to go for slicks and that ultimately proved the right call as a dry line started to appear.

Andrew Smith made the early pace on wets but was soon reeled in by the slick-shod trio of O’Connell, Griffiths and Darwin Smith. Andrew Smith was powerless to defend and was soon elbowed back to fourth as Griffiths chased after O’Connell. That was how they finished, but Griffiths was able to close the gap over the final laps.

"It was tricky,” said O’Connell, who had to go off the drier line to lap slower cars. “I didn’t want to throw it away again!"”

“I was a bit tentative at the start and Martin was way quicker. I just tried to claw it back but needed a few more laps,” said Griffiths.

Tremendous battles raged all the way down the 50-car field and repeat class wins went to Marc Mercer, David Mercer and Bullock. Pancisi had a first corner spin after a touch and did well to recover to second in the Jochen Rindt Trophy ahead of Simac.

HSCC Thundersport
The wet and slippery conditions of Saturday morning set up a voyage of discovery for Dean Forward as he drove the 8-litre Can-Am McLaren M8F for the first time in such weather. However, Forward proved entirely a match for the job as he blasted away from a superb 40-car HSCC Thundersports field to take a stylish victory.

Forward took control from the start but always had to keep his pace up as German racer Georg Hallau gave valiant chase his unique Lola T310 Can-Am car. “It was interesting,” said Forward with a degree of understatement. “It was a really good race and it is a pleasure to drive, but it was a trip into the unknown!”

Hallau, on his Thundersports debut, ran a fine race for second and the final podium place went to the hard-charging Lola T70 Mk3B of Robert Beebee once the Lola T212 of David Gathercole retired with a couple of laps to run. Instead, best of the 2-litre cars was the Chevron B8 of Martin O’Connell from the similar car of Julian Thomas.

Into a tremendous sixth overall came the best of the Sports 2000s as Formula Ford ace Robert Hall made a very impressive Thundersports debut in his Shrike P15. He finished a little way ahead of John Burton (Chevron B26) who was recovering from a tricky opening stint with a serious lack of grip. Series newcomer Tom Stoten (Lola T492) and Charlie Besley (Tiga SC82) rounded out the top three Sports 2000s contenders.

The track was marginally less wet for Sunday’s 40-minute enduro race but the early laps followed a similar format as Forward edged clear of Hallau. However, there was not to be a second win for Forward as a water system issue covered the driver in water and forced him into the pits and retirement. Up to second to challenge Hallau came Burton with his Chevron’s handling much nicer after the addition of more wing to increase downforce. He got right up to the Lola as it struggled with tyres, but Hallau held on bravely for his win.

Robert Beebee was joined by his father Josh for the optional two-driver race and they raced well as they worked the Lola T70 Mk3B up to third, while John Spiers drove a mighty race to get his McLaren M1B up to third in his first race in the ex-Andrew Beaumont car. O’Connell and Kevin Cooke (March75S) rounded out the top six, while eighth overall was a fine result for Sports 2000 winner Rob Hall. Stoten and Besley again completed the Sports 2000 podium.

Classic Formula 3
First out in the rain of Saturday morning was the excellent Classic Formula 3 pack as a strong contingent from the French championship joined the UK racers. Despite the rain and spray, the pack put on an excellent race in tough conditions as Danish visitor Christian Olsen (Martini MK39) led from the start to take a commanding win. However, Olsen could never relax too much as French championship contender Ian Jacobs (Ralt RT3), who lives three miles from Silverstone, charged up from ninth on the grid to second on the opening lap and went after Olsen. A quick spin at Club hindered Jacobs’ progress, but the gap was still under five seconds at the flag.

Sunday's race followed a similar format on a track that was only marginally less wet. Current LMP racer Olsen again romped clear in his Slim Borgudd-prepared Martini as Jacobs chased, but any hope of a challenge for the lead was dashed when Jacobs had a quick spin at Copse. Jacobs recovered to finish second and top of the French series contenders and with Andrew Smith retiring from third it was Langridge who took the place after a lengthy battle with Jackson. However, in the closing laps, Frederic Rouvier (Martini MK34) tigered up fourth at the expense of Jackson after starting 31st on the grid. Eric Martin (Martini MK39) also edged Jackson back to sixth.