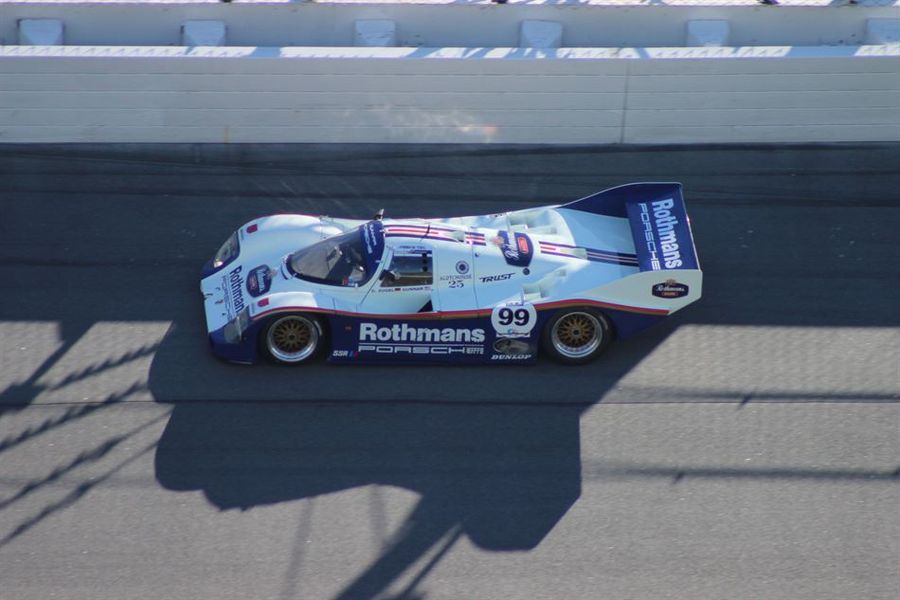 The legendary race cars of the IMSA GTP era, and their Group C counterparts that competed globally for the FIA World Sportscar Championship and in the 24 Hours of Le Mans, will be the featured race cars of the third edition of the HSR Classic 24 Hour at Daytona, November 8th-12th. Appropriately competing in the HSR Classic 24 Hour at Daytona in Run Group C, the sleek and powerful prototypes of the GTP/Group C era represented what many considered the last century's golden era of sports car racing.
The premier sports cars on the planet for the majority of the 1980s through the early 1990s, the GTP/Group C era featured such amazing machines as the Porsche 962, Nissan GTP ZX-T, Jaguar's XJR prototypes and similar and successful designs from Toyota, Chevrolet, Ford and Mazda, in addition to a variety of private race car manufacturers from the U.S., Europe and Japan.  Several of these iconic prototypes from around the world return to Daytona this November where Run Group C will have the honour of starting the HSR Classic 24 Hour for the first time at 1 p.m. EST on Saturday, November 11th.
Among the top competitors already confirmed for the HSR Classic 24 Hour is the returning 1987 No. 14 Porsche 962 team of Tommy Dreelan and Aaron Scott. The duo drove their ex-Kremer Racing/Leyton House machine to the Run Group C victory in the inaugural HSR Classic 24 Hour in 2014.
"The opportunity to drive and race at Daytona is an absolute privilege and honor," Dreelan said. "The circuit is amazing, especially at night, and to be on the top step in victory lane was very special."
Dreelan and Scott were in contention for the repeat win in 2015 until a Sunday morning mechanical issue knocked them from winning contention. The team rebounded to finish the race after their Porsche was repaired, taking the final checkered flag fourth in Run Group C and second in class to overall winners Christian Zugel and Mark Patterson, who co-drove a 1986 No. 99 Porsche 962 carrying the memorable Rothman's colours.
"The desire is greater than ever to return this November, have some more fun, and we hope to be in victory lane again," Dreelan said. "It's a very friendly and relaxed event with great cars, competitive racing and a circuit with such fantastic history. Plus, there is plenty of track time."
Run Group C is also home to several different classes of historic IMSA GTO and GTU race cars, and similar production-based GT race cars that raced in the same era in Europe and around the world. Notable GT machines from the 1980s through the early 1990s eligible for the HSR Classic 24 Hour in Run Group 6 include big-bore Ford Mustangs and Chevy Corvettes, three and four-rotor Mazda RX-7s and the usual lineup of 911-based Porsche race cars.
In addition the on-track competition, the Classic 24 Hour's featured Driver Panel will include some of the legendary drivers and other motorsports notables who were important players in the GTP/Group C era.
A full display of GTP/Group C race cars is another off-track attraction that will let race fans and interested competitors take a close-up look at some of the top prototypes from the era throughout the HSR Classic 24 Hour weekend.
The HSR Classic 24 Hour at Daytona debuted in 2014 as a tribute race to the internationally famous Rolex 24 At Daytona, which has been run on the 3.56-mile road course at the World Center of Racing for more than half-a-century.
The HSR Classic 24 Hour gives the magnificent racing machines that were driven to glory at Daytona in the last few decades another chance to shine on the high banks. At the same time, HSR's competition class structure also let's some race cars that never had a chance to race at Daytona in their prime a chance to make their own history in the Classic 24 Hour.
A true endurance race in its own right, the Classic 24 Hour features six period-correct Run Groups racing in succession for a full day and night. Each Group takes to the track four times in total in a non-stop, 24-hour spectacle that is as close to the real thing as you can get.
The grand prizes at the end are custom-made and HSR Classic 24 Hour at Daytona-specific B.R.M. Chronographes watches that are presented to the overall winner of each Group.