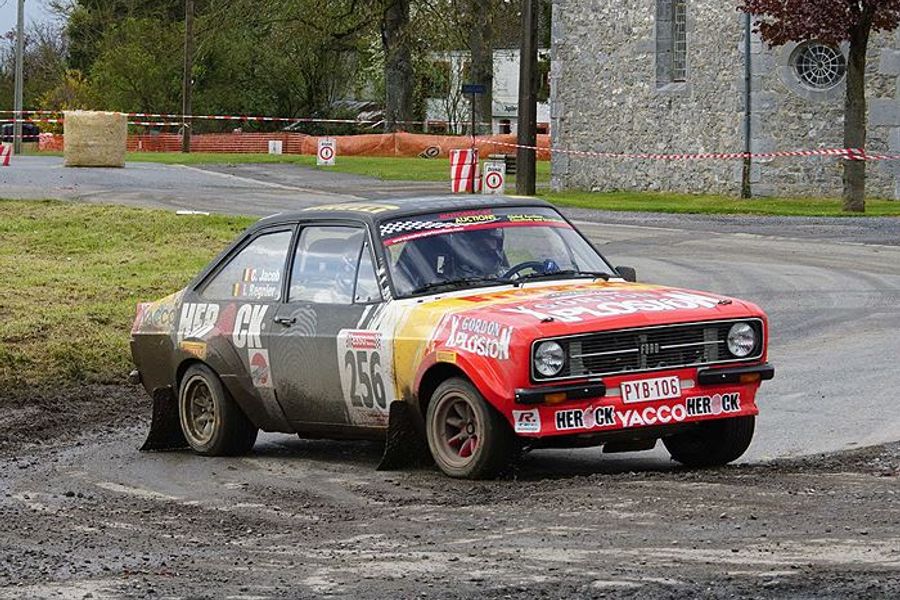 Christophe Jacob and Isabelle Regnier were the first championship finishers on round two of the Fuchs Lubricants R.A.C. Historic Asphalt Championship, Rallye Salamandre in Belgium on Sunday (24th of  April). The championship’s first away event was deemed a great success despite challenging conditions as snow and rain left the closed public roads very slippery. The result for Jacob was particularly fitting as he did a great deal of work to bring the championship to the rally and support the British crews before and during the event. Jacob (Escort Mk2) put a marker down on the first of nine special stages by going fastest and was able to steadily extend his advantage as local knowledge helped him contend with the tough conditions. A tremendous second fastest on the first stage was the similar car of Barry Stevenson-Wheeler and John Pickavance but they then slid off into a ditch on the second stage and were out of the rally. Conditions did improve a little as the day progressed and the final loop of three stages was less wet and muddy. Jacob continued his excellent pace and finished third overall in the rally’s historic section behind Florian Gonon (Ford Escort Mk1) and Stefan Stouf (Porsche 911RSR) who were split by one second. Tim Pearcey and local co-driver Louis Louka had another strong run in Belgium to finish second among the R.A.C. crews while Roger Moran/Ashley Trimble (Escort Mk2) scooped a second good points score to back up their victory on round one, the Bovington Stages. Fourth place was a great result for Grant Shand who had his daughter Bonnie co-driving for the first time in his Escort Mk2, while top of Category 2 once again was the Escort Mk1 of Roger Matthews/Tom Marrott. They were chased home by brothers Simon and Alister Crook who struggled with tyre choice on the opening loop and survived a major overshoot into someone’s drive before setting a cracking pace later in the day. Two minutes in a ditch cost Steve Perez and Carl Williamson a chance of a top 10 finish in the stunning Lancia Stratos, which ran faultlessly all day. The Stratos finished just ahead of Chris White/Chris Dewsnap who survived four spins in the first two loops of six stages. Brothers Leigh and Chris Armstrong also suffered a lengthy delay in the second stage but then set top six stage times. Notable retirements included Steve Stringer/Carrol Soanes with a broken throttle cable on their Sunbeam Lotus and Tim Freeman/Paul Wakely who ran their Ford Sierra Cosworth in Category J1/J2 but elected to retire at the end of the first loop of stages after finding the car unsuited to the road conditions.