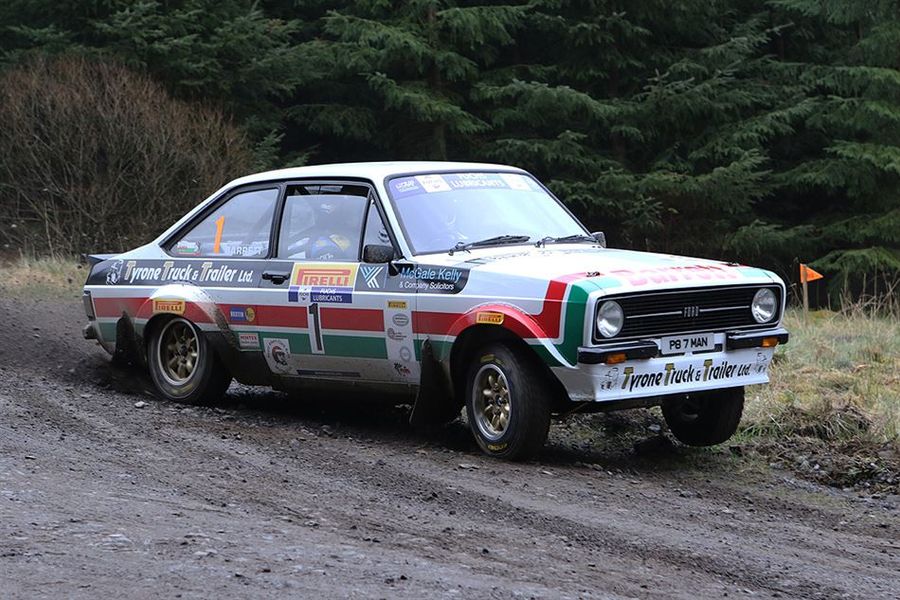 A glorious battle between Paul Barrett and Matthew Robinson marked round two of the FUCHS LUBRICANTS MSA British Historic Rally Championship on the Pirelli Rally (Saturday 28th April).
After a fierce but entirely sporting contest, Barrett and Dai Roberts took victory by just 8.6s over the similar Ford Escort Mk2 of Robinson and Dave Robson. The deciding stage was the epic 15.39-mile test in The Forks where a blistering attack by Barrett turned the rally in his favour.
As well as being the second of eight BHRC rounds, the Pirelli Rally was also the second round of the BHRC Forest Challenge, supported by Rally and Competition Equipment, and the second event for the new BHRC2, supported by Sherwood Engines.
A tremendous field lined up to tackle four big stages in the main block of the mighty Kielder forest complex and there was universal praise for the quality of the roads as the 2WD field ran ahead of contenders in the MSA British Rally Championship. As ever, the punishing Kielder ditches claimed cars and the top two crews could easily have joined the list of victims, such was their pace.
Robinson was immediately on the attack in the opening Pundershaw stage and took an early 10s lead. He added a further second in Roughside but after service at Kielder Greenside came the big test, 15 miles in The Forks, and Barrett went on the attack. His strategy paid dividends and he took 14s back from Robinson to take a slender lead into the final stage. With five more seconds added over 10 miles in Whitesike, Barrett arrived back in Carlisle for an eight-second victory. Barrett headed the FIA Category K cars while Robinson won the Rally and Competition Equipment Category 3.
Third place could have gone to at least three other crews, but they were all out during stages three and four. The Forks caught out both Joe Price/Chris Brooks and Alan Walker/John Connor and Walker’s day got even worse when his stricken Escort was t-boned half an hour later by the Avenger of Eliot Retallick. Simon Webster/Jez Rogers moved into third but a sheered track control arm sent them up a bank and into a roll in Whitesike.
Instead, it was Ieuan Rowlands and Emyr Hall who took third in the BRM-powered Hillman Avenger. This was a journey into the unknown for Rowlands on his first rally in Kielder and 14 years on from his last event outside Wales. But his pace was good and third was a very encouraging result for both car and driver.
Stuart Egglestone and Brian Hodgson were next in the historics with another impressive performance in their Pinto-powered Escort Mk2, which earned them class D3 by nearly a minute over the similar car of Ben Friend/Cliffy Simmons.
Overall spoils in the Skipton Ford Category 2 went to a tremendous performance from Mark Holmes/Craig Simkiss (Ford Escort Mk1). Holmes had just two seconds in hand over class C5 rivals Warren Philliskirk and Garry Green after Philliskirk clawed back a lot of time in The Forks, while Chris Skill/Tom Murphy were not far back in third. Class C3 netted a deserved win for the Escort Mk1 of Mike Simpson/Dale Gibbons on the driver’s first visit to Kielder.

The Pirelli Rally was the second round of the new BHRC2, supported by Sherwood Engines, which has been created to turn the spotlight on the REIS Category 1 (pre-1968) and all other up to 1600cc cars in the championship.
From class C2, it was Robin Shuttleworth and Ronnie Roughead (Ford Escort Mk1) who won BHRC2 but only after fending off a strong challenge from the Hillman Avenger of Ken Graham/Rory McCann. The final margin was only 3.1s after Graham was just four-tenths of a second faster in the last stage. Prior to that, in over 15 miles in The Forks, Shuttleworth had been four-tenths faster. “The stages were brilliant and the car was faultless,” said Graham who completed a good rally for the Northern Irish contingent.
It was not a good day, however, for BHRC2 pacesetters Adam Milner and Roy Jarvis who were well clear after two stages. Unfortunately, a big off on SS3 left their Escort Mk1 badly damaged and could mark the end of their season.
Category 1 delivered a handsome victory for Rikki Proffitt and Graham Wild (Porsche 911) who had just over half a minute in hand over Class B4 winners Bob Bean and Miles Cartwright (Lotus Cortina). “The stages were excellent,” said Proffitt after a trouble-free rally. Class B3 went to the charging Ford Anglia of Malcolm Rich and Arwel Blainey, but the Kielder stages were just too fast for the Anglia to chase the more powerful cars.