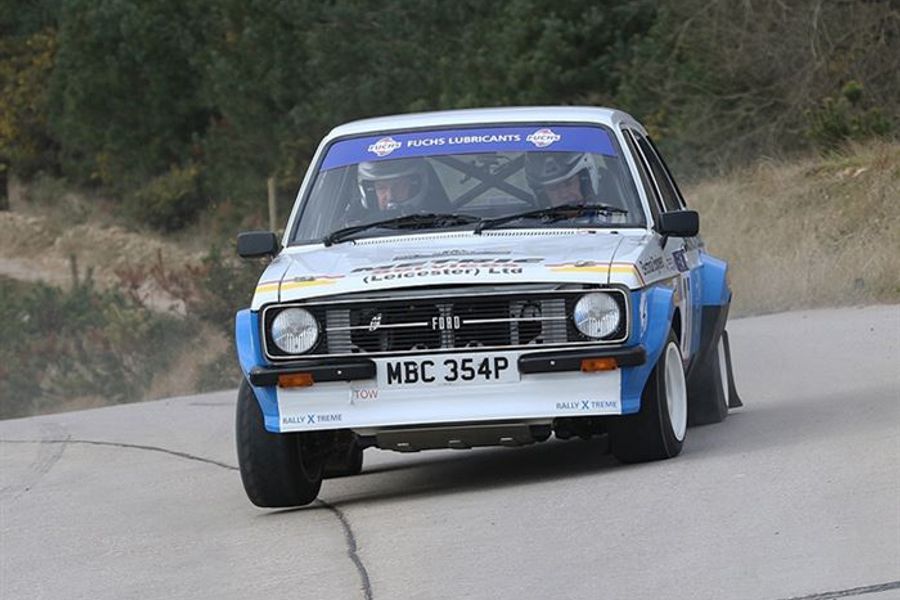 Leading crews from British historic rallying will head to Belgium this weekend for the second round of the new Fuchs Lubricants R.A.C. Historic Asphalt Rally Championship, Rallye Salamandre (Sunday 24th of April). The Fuchs Lubricants R.A.C. Historic Asphalt Rally Championship is organised by the Roger Albert Clark Rally Motor Club and is a dedicated asphalt championship for all categories of historic stage rally cars.
After a very successful opening round on the Bovington Stages last month, the championship steps up a gear for round two with a trip to Belgium for a classic closed-road event in the south of the country near the French border. Rallye Salamandre will offer a typically compact format with three loops of three stages and minimal road mileage.
Alongside a very strong local historic entry, nearly 20 UK crews will make the trip and the competition will be fierce. Heading the championship points after the first round is the Ford Escort Mk2 of Roger Moran and Ashley Trimble and they will set a strong pace on the Belgian roads. However, a gaggle of quick Escorts will really take the fight to the Ludlow driver, including the car of Grant Shand who has plenty of experience of rallying in Belgium. Heading Category 2 in the R.A.C. Championship is the Ford Escort Mk1 of Roger Moran and Tom Marrott.
On the Bovington Stages, brothers Leigh and Chris Armstrong were leading until sidelined with engine issues and they are determined to show well in Belgium, while Tim Pearcey and Louis Louka will look to continue their recent excellent form in Belgium. Martin Jones is another quick British Escort Mk2 with a local co-driver, Juha Bos.
Two crews who are splitting their time between the R.A.C. and Mintex MSA British Historic Championships this season are Barry Stevenson-Wheeler/John Pickavance and brothers Simon and Alister Crook. Both crews are relatively new to rallying in Belgium and Stevenson-Wheeler is planning to have his car re-prepared for the following weekend’s gravel-based Pirelli Carlisle Rally. Chris White and Chris Dewsnap are welcome championship newcomers in their Escort Mk2, while Andrew Siddall returns to asphalt in his Escort Mk2.
Adding tremendous variety to the Escort pack is the stunning Lancia Stratos of Steve Perez/Carl Williamson and the equally gorgeous Toyota Celica of Ben Mellors. Both cars are sure to be a real hit with the enthusiastic Belgian fans. More popular cars will be the Sunbeam Lotus of Steve Stringer/Carrol Soanes and the hard-driven Saab 96 of Steve Higgins/Martin Burns.
Making a small piece of history will be the championship debut of a car from the FIA Appendix J1 and J2 era, for cars up to 1990. Regular Escort Mk2 driver Tim Freeman and co-driver Paul Wakely will field their Ford Sierra Cosworth for the first time and the car is another welcome addition to the championship line-up.
Fuchs Lubricants R.A.C. Historic Asphalt Rally Championship Roger Albert Clark Rally Motor Club Rallye Salamandre