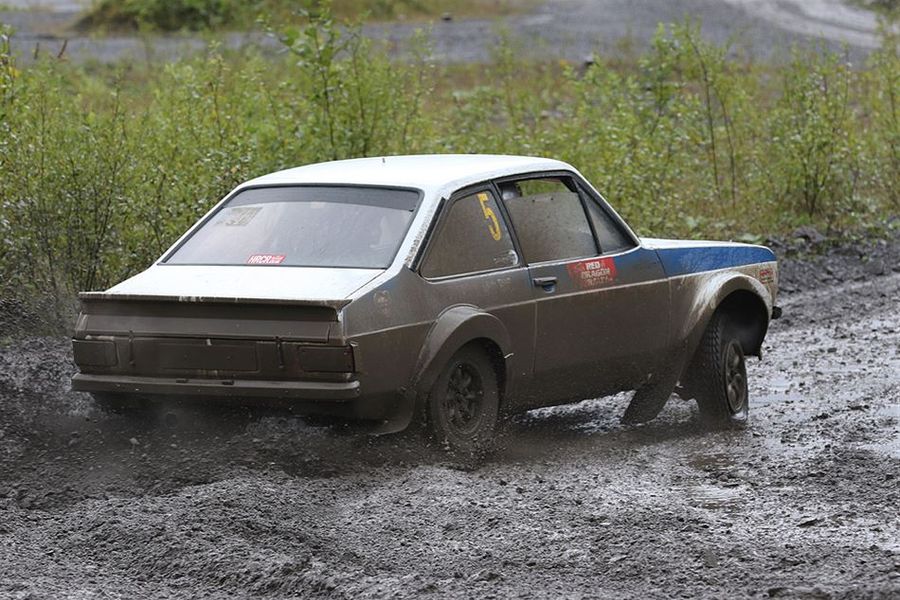 Picture: Paul Lawrence.
Nick Elliott and Dave Price took a final stage victory on the Red Dragon Historic Rally (Saturday 20th of August), the sixth round of the 2016 Mintex MSA British Historic Rally Championship.
On a day of heavy rain and incredibly slippery conditions in Walters Arena, Elliott fought back from a time-consuming puncture on stage three and dived ahead when leaders Joe Price and Chris Brooks slid out of the rally on the final stage. However, it was very close for Elliott as Jason Pritchard and Phil Clarke finished only three seconds behind.
The event ran over a shortened 35-stage mile route in the Walters Arena complex event due to the on-going issues over the cost of access to the forests managed by Natural Resource Wales. Heavy rain on Friday night and through Saturday ensured crews faced the toughest conditions many of them had ever competed in.
Elliott set a fierce pace over the opening stage, reading the road conditions superbly to take an instant nine-second lead over Price. That margin doubled on the shorter stage two. When the opening stage was repeated as SS3, Elliott hit trouble with a front puncture early on and they battled through the stage, losing over a minute. They clawed a little time back on SS4, but were still 28s down on Price heading into the last stage, which linked the two stages together to make a 12-mile decider.
However, it was far from over and a particularly tricky corner caught out Price and he slid off the road and out of the rally. Damage was limited to one corner of the Escort, but they were out of the rally and a surprised Elliott took an unexpected victory as well as maximum points in the RSR Historic Engineering Category 3.
However, it was very close for Elliott as Pritchard pulled back six seconds on the last stage to finish only three seconds behind. “The first two stages were absolutely awful,” said Pritchard. “We were just passengers and a finish was our main target.” Importantly, after three non-finishes, it was a result that keeps their title hopes alive.
Third overall was a very good result for Steve Bennett and Paul Spooner after a trouble-free run in the Dave Jenkins-prepared Escort. “I certainly found out how to drive an Escort sideways,” said Bennett. Meanwhile Ben Friend and Cliffy Simmons scooped a D3 class-winning fourth overall as the first Pinto-powered finisher in their Escort Mk2. “It’s rewarding to be at the finish with no damage,” said Friend.
Simon Tysoe and Paul Morris (Ford Escort Mk1) took another Capital Construction Category 2 victory after a tremendous performance, though Warren Philliskirk and Nigel Hutchinson were only 22s down at the finish. “That’s one of the most challenging events I’ve ever done,” said Tysoe. Philliskirk agreed about the conditions: “I had to work hard for that,” said the Yorkshireman. A commendable performance from Mike Tomkinson and Shaun Whitehurst pushed their Escort Mk2 up to seventh overall and one of their best BHRC results to date.
Bob and Dale Gibbons won the Vintage Car Radiator Company Category 1 after a strong run in their Ford Cortina Mk2 while Pritchard/Clarke took maximum points in the Holton Homes Category K. Notable class winners on a very challenging day included Peter Smith/Alun Cook (Opel Ascona) and Guy Anderson/Steven Davey (Sunbeam Lotus). However, it was a difficult day for Anderson as the top of a spark plug took out a piston and they reached the finish with the oil warning light on.
Husband and wife Stuart and Linda Cariss took class C2 in their 1600cc Escort Mk1 despite a last stage spin and stall. They were still ahead of the similar car of Mal Bayliss/Siobhan Pugh, which was struggling as the muddy condition sapped power from the engine.
Dave Price Paul Lawrence Walters Arena Red Dragon Historic Rally Nick Elliott Picture 2016 Mintex MSA British Historic Rally Championship