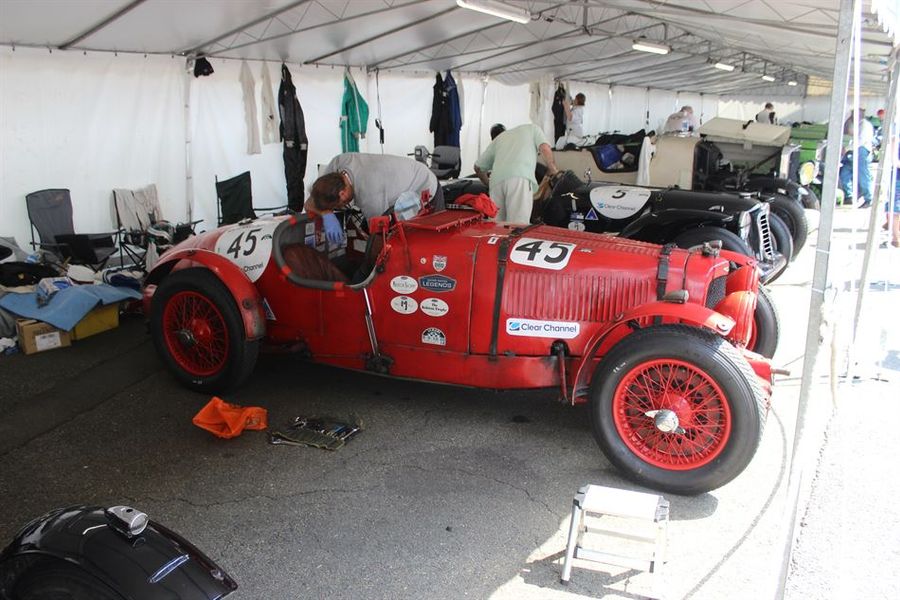 Modern prototype racer Richard Bradley is out in the family Aston Martin Ulster in Plateau 1 at the Le Mans classic, and hustled the1935 racer to eighth overall after this afternoon’s daytime qualifying session.

We interviewed Richard last year when he was racing the car in a handicap race at Silverstone, and took the opportunity this afternoon to catch up with him in the paddock after his first laps of Le Mans in the Aston:

“I’ve done Le Mans in modern sportscars,” explained Richard, “and the Aston Martin isn’t as much of a contrast as you might think. The reality of it is you have to push this car just as hard as I do a modern car, you just can’t attack the kerbs so much.

“It is a lot of fun, this is the first time I’ve been round Le Mans in a classic car. This car was designed for Le Mans and it handles like a dream, it feels a lot better here than another circuit we go to.

“This was the only race that really mattered to Aston Martin and they designed the car for Le Mans, we just race it on other circuits as well now. The car is really good fun, you have to play a bit of a cat-and-mouse with the other cars in the class, normally in modern racing the quicker cars blast off and you don’t see them for a while.

“I’m really looking forwards to the night session. You have a lot more time going round in the Aston Martin and you can see better as you are higher up. In a prototype you can see very little, the A pillars are in the way, you sit low with the wheel arches are high, and the car is so big. We are going significantly slower but you feel you are quick as you are pushing so hard, though you have a lot more time if you make a mistake to decide what to do, in a prototype if you brake too late it is game over, but in the Aston you can try to drive round it.

“The first time a prototype breaks traction it is scary as it is so violent, you do get used to how to handle it, but with this car it breaks traction every time you turn the steering wheel.

“I am quite happy to go on record saying that is the most physical car I have ever driven in my life. It weighs over a tonne, it has no power-steering, you have no seatbelts so you have hold yourself in, and because it has leaf-spring suspension so the more weight you have over the suspension the more grip you have.

“You have to move yourself round in the car, while holding yourself in, taking all the shocks through your body – to race this car for a long time is very, very physical. Also, your feet go underneath the top of the engine and it gets very warm, even though it is an open top car.

“It is the same physicality as riding a motor bike, you have to manhandle it. Yes, you can drive around slowly and it won’t be so physical, but I have no interest in driving anything on a race circuit unless I can drive it as fast as I can – and I said that to my dad when he wanted me to drove in historics.

“It is great here, we were way quicker than we expected and we are hoping for better in the night.”