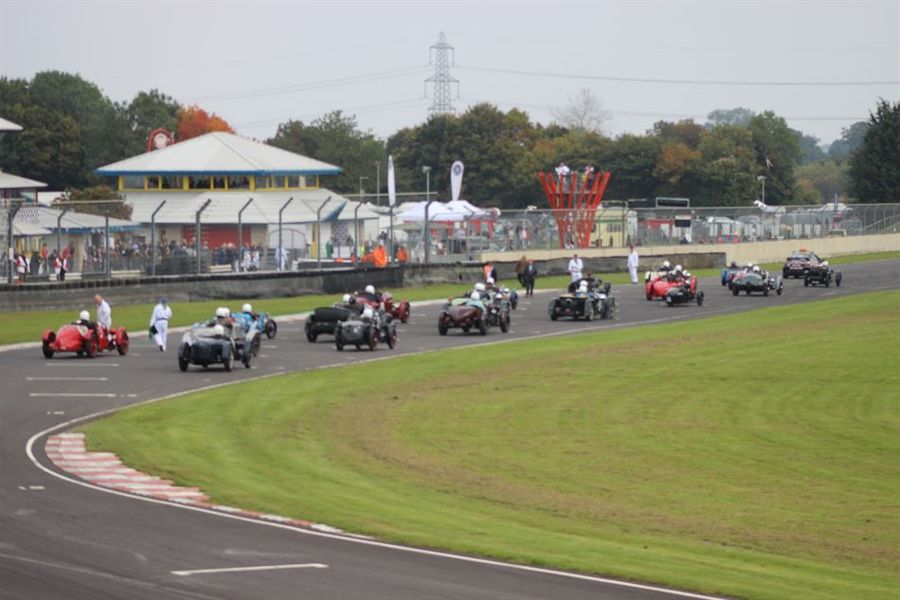 A fine Autumnal day out featuring saloon, GT, single-seater and sportscar racing as well as a host of demonstration runs can only mean it is the Castle Combe Autumn Classic Historic Racing Festival, supported by Bristol Forklifts and David Hathaway Transport, and this Saturday’s, October 7th, edition should more than live up to the high standards of previous years.
Headlining the seven race schedule is a round of the GT & Sports Car Cup, which features a capacity invitation grid with both local and world-wide interest. Given the high speed nature of the circuit, the power of the AC Cobras might place them as favourites though the light-weight Jaguar E-Types also in the GT4 class will be right with them.
Gloucestershire has an ace up its sleeve in the form of the circuit’s all time outright lap record holder, Nigel Greensall. The Cheltenham based pro’, who set the 130.93mph average in 1997, showed how his heavier ‘GT3’ class E-Type can perform when conditions are tricky, by leading the Kinrara Trophy at Goodwood until retirement. Alongside him in that class are some of the best of the world’s Austin Healey 3000 talent, much of it also with West Country connections. Chris Clarkson from Westbury on Trym and David Smithies from Flax Bourton team up again for another crack at a Combe Autumn Classic win, whilst Karsten Le Blanc makes the trip from Holland, now the owner of the world’s most famous Healey, DD300, once the pride of Bristol Healey legend John Chatham.
Sports cars from the 1950s will also feature in the ever popular ‘FISCAR’ race won last year by West Country property magnate Steve Boultbee-Brooks in his 1955 Aston Martin DB3S in which he also dominated the Jon Gross Memorial Trophy race for historic Astons. Amongst the many delicious cars in the FISCAR race are such rarities as the Lister-Jaguar Flat Iron, Lancia Aurelia, Connaught ALSR, Frazer Nash Le Mans and Lamont, Kellison, Alfa Romeo 6C and Kieft.
There will be plenty of E-Types to savour in the Pre ’66 Jaguar race from the Jaguar Enthusiasts Club, but last year it was the XK120 of Kevin Zwolinski which beat them all. The race will be run in honour of Norman Dewis, the legendary Jaguar race and test driver responsible for the development of so many Jaguar competition and road cars.
Also returning is the penultimate round of the Silverline Historic Formula Junior Championship, with a large grid of unusual and and always entertaining machinery. The BMC MK2 of Peter De La Roche was a dominant force in 2016 and will face opposition this year from marques such as Deep Sanderson, Condor, Moorland, Wainer and Lynx. Stroud’s Jim Blockley, a long standing Monoposto exponent, has the equally unusual Caravelle whilst Painswick’s Peter Hawkey has his lovely Lotus 20.
The Formula Vintage race for pre-war sports cars includes Barry Foster from Glastonbury in his MG Montlhery, Minety’s Tim Wadsworth in his 2 litre Lagonda Tourer and Westbury’s Stephen Curtis in his 1934 Talbot 105. The Blakeney-Edwards family have three Frazer-Nash Super Sports entered. Simon, from Wrington, Bristol, will be looking to improve on his 3rd place in the 2013 race here when Patrick entertained as always with his incredible ‘Owlett’.
The Bristol Aeroplane Company’s race for 500cc racing cars includes 2011 Combe FF1600 champion Rob Hall in a Cooper Norton.
There are many incredible cars taking part in the demonstrations and on display around the circuit. There is a good selection of F1, F5000 and F2 cars, amongst them the two F1 Scarabs from 1960, one in the hands of event sponsor Julian Bronson from Bristol, now the fastest front engined F1 car on the planet. The sister car is in the hands of Eddie McGuire, the Australian TV presenter and businessman. Nigel Greensall promises to give a full on demonstration of an F5000 Lola T332 but perhaps not quite as quickly as his lap record! The Hesketh 308 driven by James Hunt in 1974 will contrast with the ex-Alan Jones 1977 FW06 Williams and the Lotus Judd driven by Nelson Piquet in 1989. The McLaren M10B, a car which held the outright record at the circuit from 1970 to 1997 jointly between Peter Gethin and Howden Ganley is amongst a number of other significant F5000 cars with links to the circuit, including the F5000 ‘Harrier’ of the late Terry Sanger from Westwood, Bradford on Avon.
In total contrast but equally compelling and fascinating will be the Freikaiserwagen 500 built by the then 18-year-old David Fry and mainly driven by his cousin Joe from Winterbourne and latterly Chipping Sodbury. The car was successful in many national and West Country events including the Backwell Hill Climb where it debuted in 1936. Sadly Joe met his end in the car at a hill climb at Blandford in July 1950.
Pink Floyd drummer Nick Mason, always a supporter of the circuit and a local resident of nearby Corsham, sends his fascinating ex-works Ferrari 512S, a 1970 car driven by Mario Andretti but almost destroyed after the car was purposely set on fire whilst filming for Steve McQueen’s film, ‘Le Mans’!
Another car with a local connection will be the 1924 Lancia Lambda of John Earle-Marsh from Batheaston, raced in the March 1951 10 lap handicap race at Combe by his father and pre-war at Brooklands.