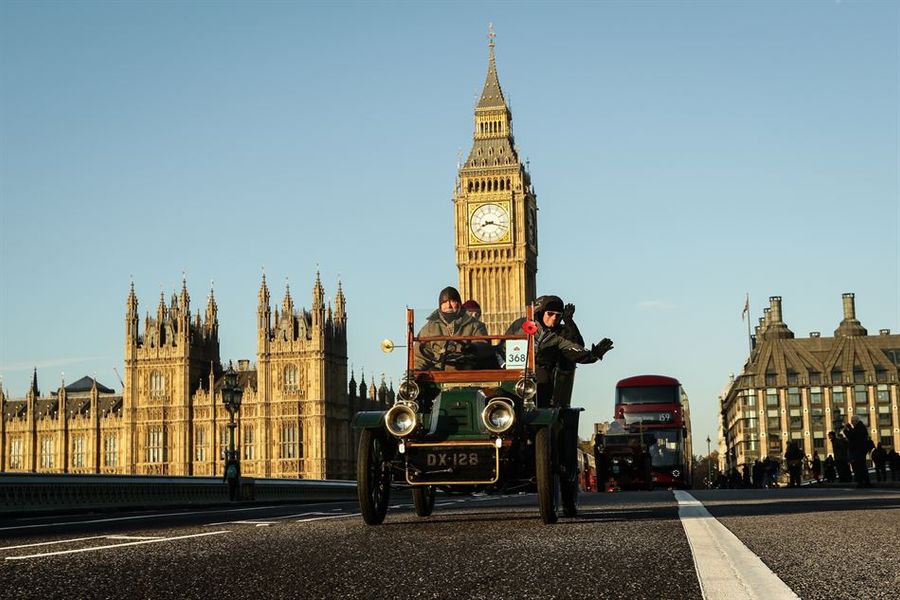 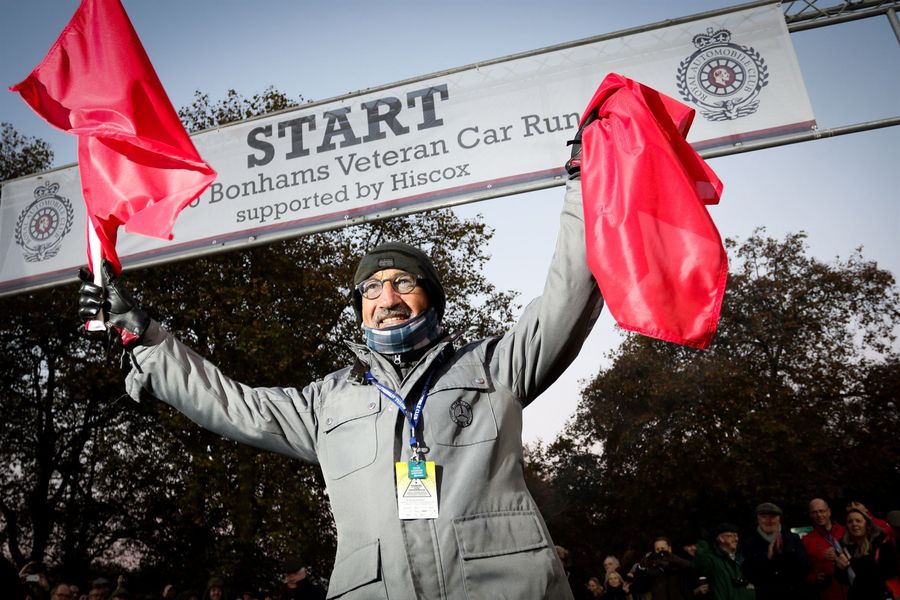 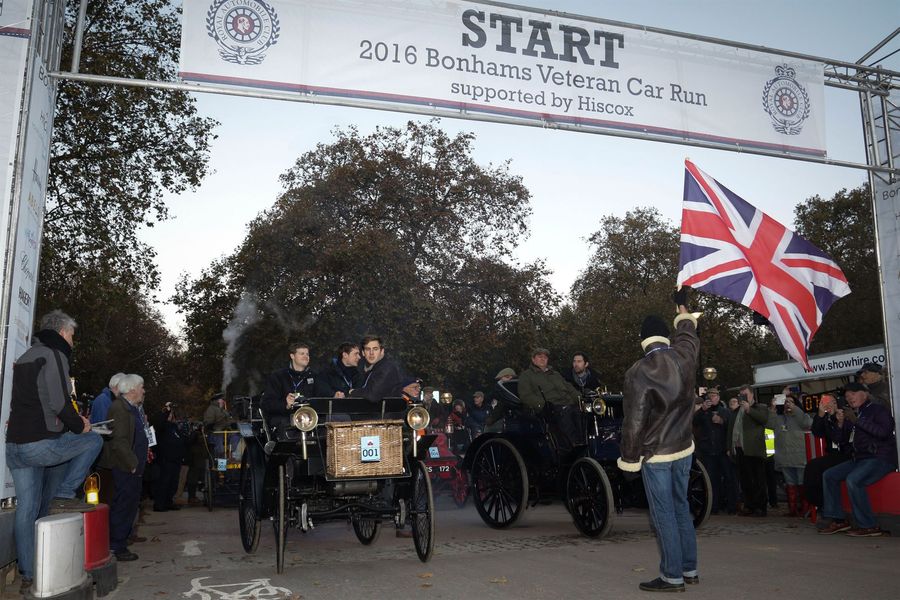 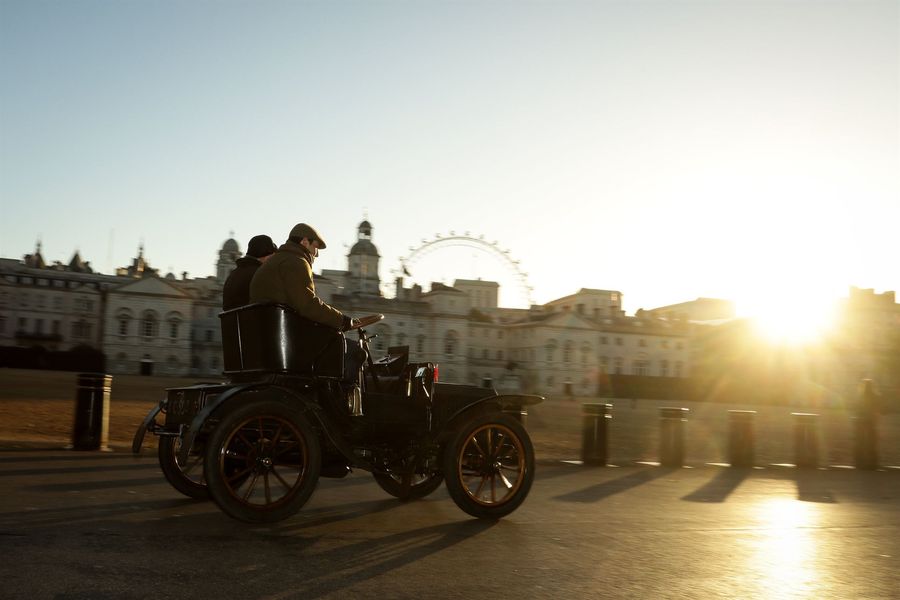 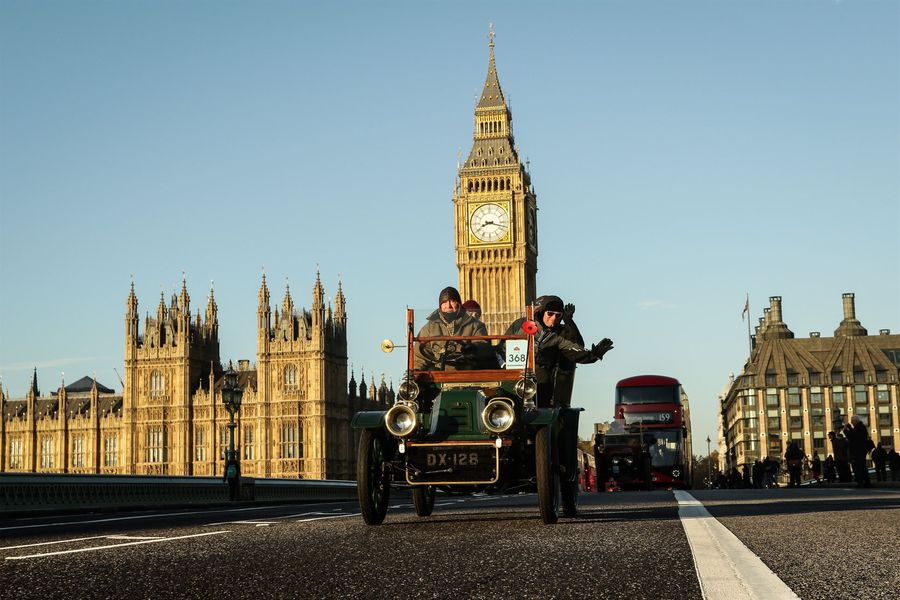 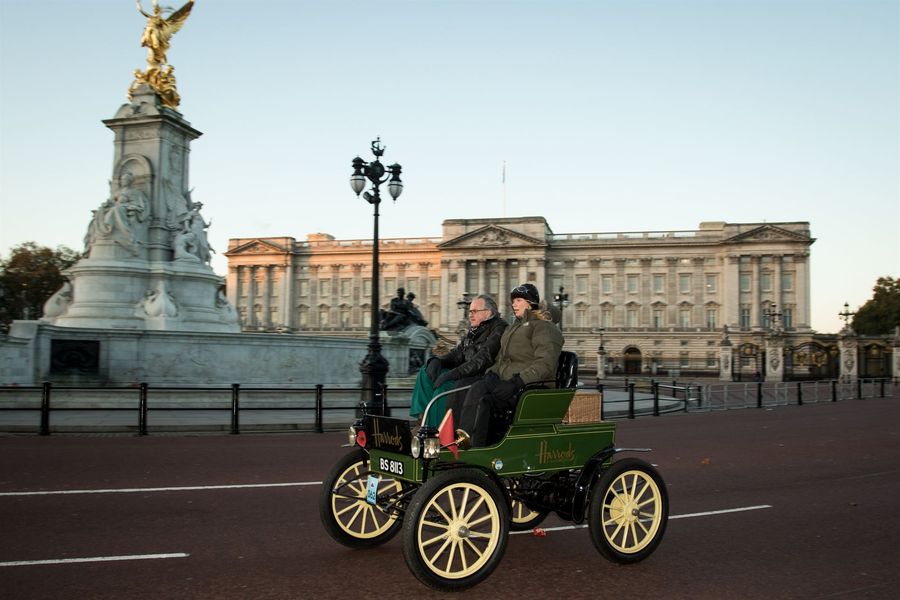 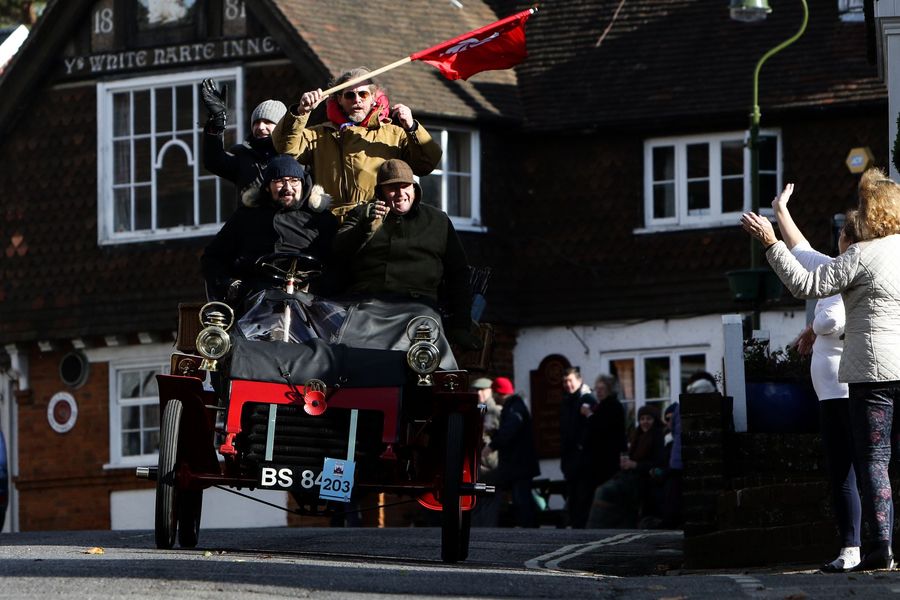 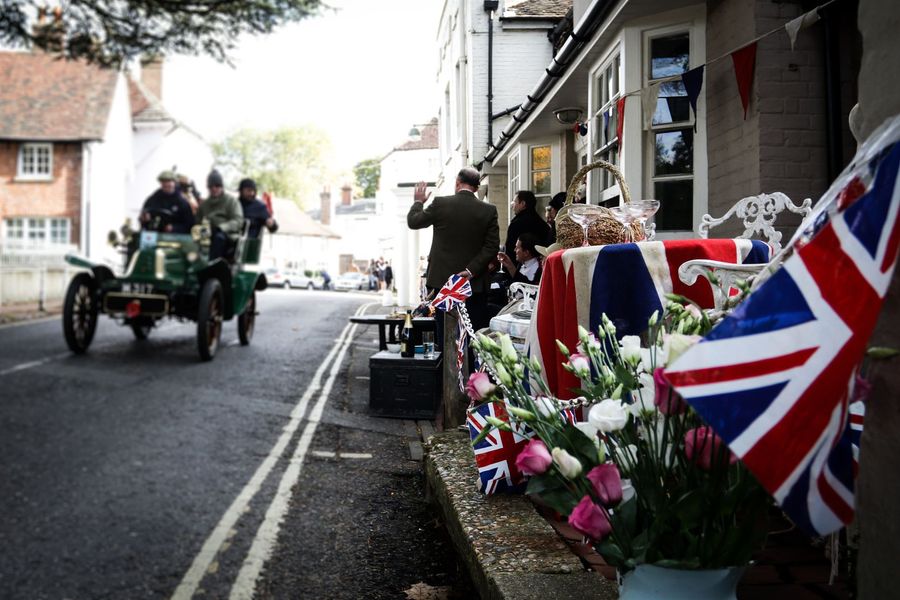 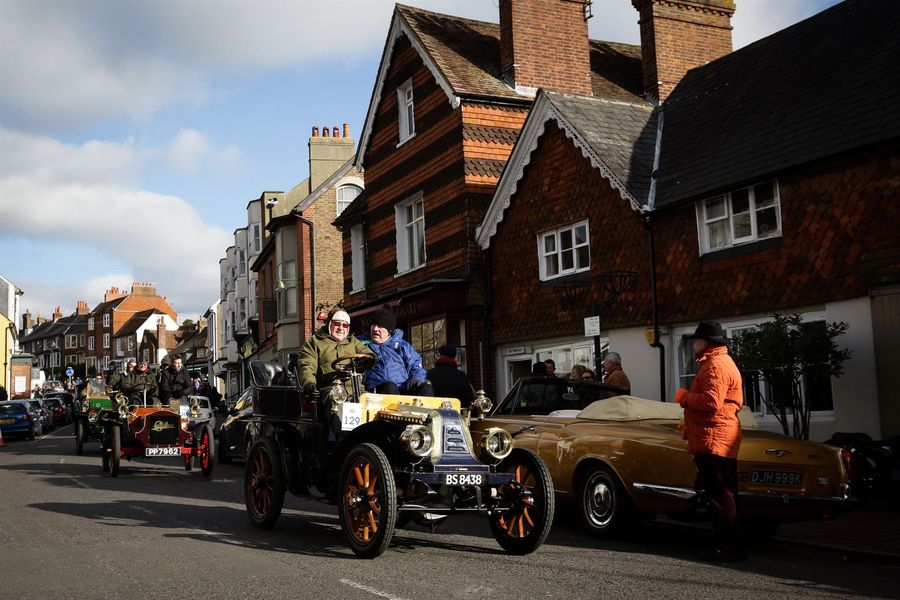 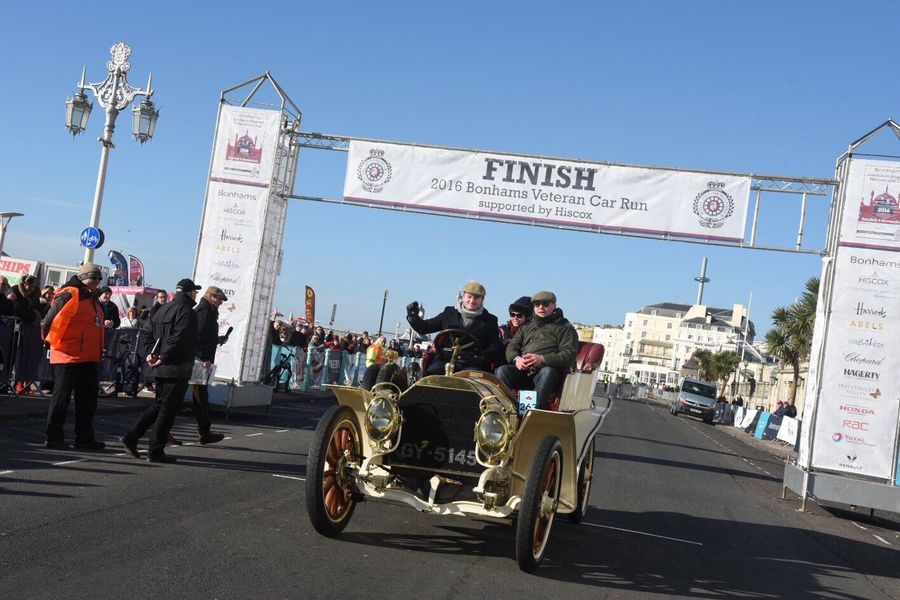 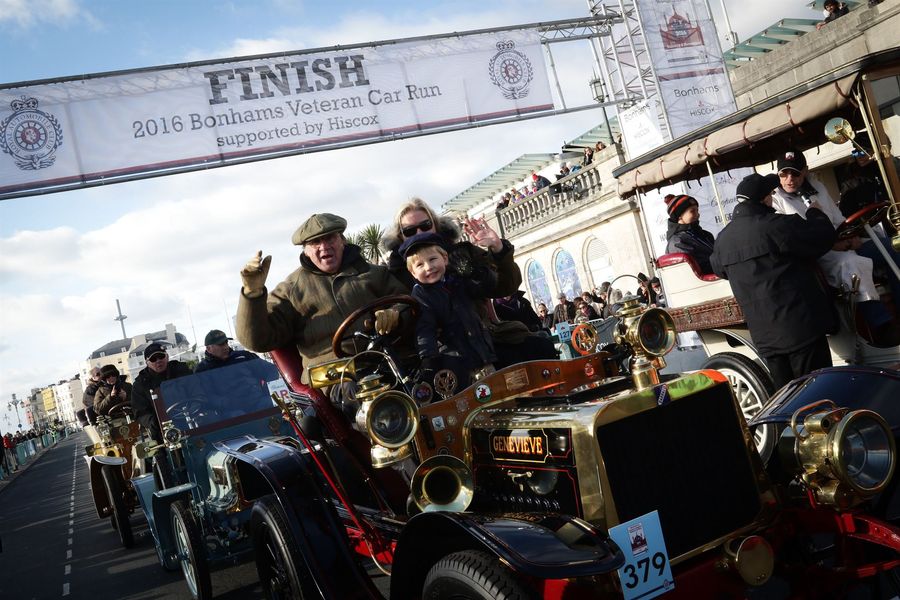 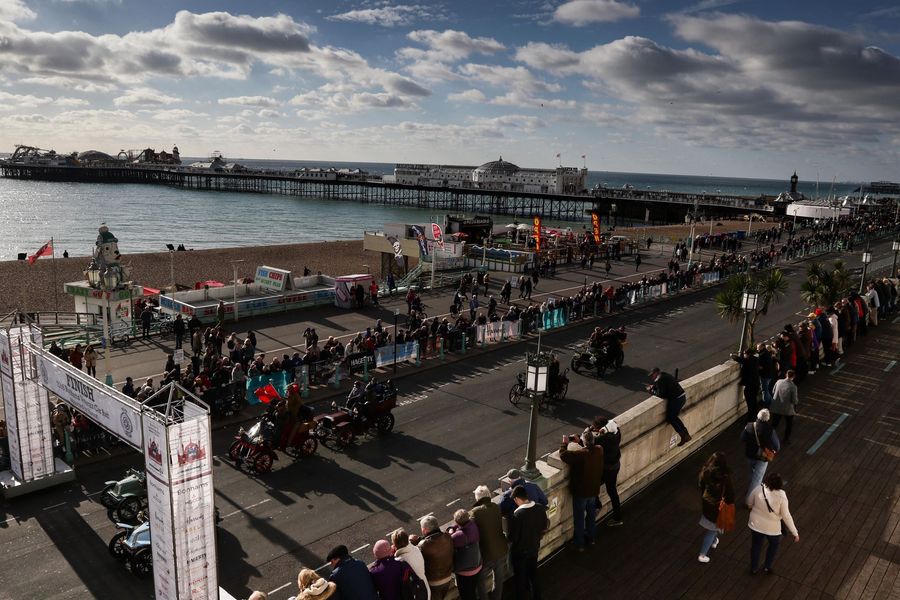 Click on the Gallery tab for pictures from the run!
As a crisp and chilly London was still covered by darkness, nearly 400-pioneering veteran cars, their intrepid drivers and plucky passengers gathered in Hyde Park on Sunday (6th of December) waiting for daybreak to signal the start of the annual London to Brighton Run.
This year was all the more special as the 2016 Bonhams Veteran Car Run supported by Hiscox – and staged, as it has been since 1930, by the Royal Automobile Club – celebrated a number of significant anniversaries. It was 120-years since the original Emancipation Run, which was held in 1896 to celebrate the Locomotive on the Highway Act. This raised the speed limit for ‘light locomotives’ from 4 to 14 mph and abolished the need for a man to walk ahead waving a red flag.
It also marked 130-years since German engineer Karl Benz revealed his Patent Motorwagen, a petrol-powered three-wheeler regarded as the world’s first automobile. In his honour, this year’s Run had a German theme which was supported by Daimler Benz who entered a number of early Benz and Mercedes cars from its museum. One of these, a 1901 Benz Spider, was driven by ex-Formula 1 team owner turned TV pundit Eddie Jordan. A London to Brighton novice, Jordan quickly adapted to the somewhat slower pace of Benz, and hailed the day as right up there alongside anything he had savoured in his motor sport career.
“What a fabulous experience, it surpassed all my expectations ten fold,” he enthused. “This equals the best day I’ve ever had in F1. You can’t describe it. Everybody should make the effort to come out and see the Run, or try to participate if they can.
“It’s remarkable just how well Mercedes built these cars. They were great engineers in their time and the fore-runners of what we see in Grands Prix today. In fact, the only thing missing was a heater… ”
Jordan was not the only former F1 team owner turning back the clock on the road to Brighton. Ross Brawn also completed the course in his 1904 Wilson Pilcher while other famous faces included Lindsey Russell from the long-running Blue Peter children’s television show and fashion model Jodie Kidd aboard the Harrods owned 1901 Pope Waverley.
Following a respectful distance behind the early starters were BBC Radio 2 DJs Ken Bruce and Chris Evans plus BBC One Show host Alex Jones driving vintage buses full of passengers who paid for their ride of a lifetime by jointly raising more than £180,000 for BBC Children in Need. They were joined by BBC Breakfast weather reporter Carol Kirkwood and Strictly Come Dancing stars Kevin and Karen Clifton.
After the ceremonial tearing of the red flag – performed this year by Jordan – the cars set off alongside Buckingham Palace and down the Mall before heading past Big Ben and over Westminster Bridge at the start of the journey to the coast. With the 60-mile route bathed in autumnal sunshine and lined by hundreds of thousands of enthusiastic spectators, the first target for the intrepid automobilists was Crawley and The Harrods Stop at Honda Gatwick. Here their cars could be fettled while the participants enjoyed warming refreshments from the Harrods Food Halls.
From there it was a quick trip to Crawley High Street where the Run started part two of the journey to Brighton’s Madeira Drive. A popular spectator gathering point where Gatwick Airport gave away much welcomed hand warmers and provided a veteran car as a photographic back drop, the High Street marked the start of the Chopard Regularity Time Trial.
While the Run is famously not a race, the Time Trial introduces a competitive element. More than 180-entrants, more than ever before, elected to take part in the Trial by attempting to keep to a strict average speed for the stretch between Crawley and Burgess Hill. The winner was Wolfgang Presinger in a 1904 Covert, covering the 13 miles at an average speed of 8.05mph compared to his 8mph target.
In total 351 of the 392-starters made it to Brighton before the 4.30pm deadline to claim a coveted finishers’ medal. Appropriately in a year celebrating German cars, the first car home was the 1903 racing Mercedes driven by Chris Scott from Jersey which arrived in the sunny seaside resort shortly after 10am. With a mighty 9.2-litre engine under the bonnet delivering an impressive 60bhp, perhaps that was no surprise.
The Royal Automobile Club’s Peter Read, Chairman of the Motoring Committee, said: “Once again this remarkable event – the world’s largest gathering of veteran cars and the globe’s biggest free-to-view motoring event – was a huge success, a fitting tribute to the men and machines who first put the world on wheels.
“The weather was glorious – if a little chilly – this year, and that was a real bonus for the spectators, the participants taking part not to mention the volunteer marshals who, fittingly, make sure it runs like a well-oiled machine. Here’s to next year when the Run will be held on 5th November, ahead of Bonfire Night.”
London to Brighton Veteran Gallery