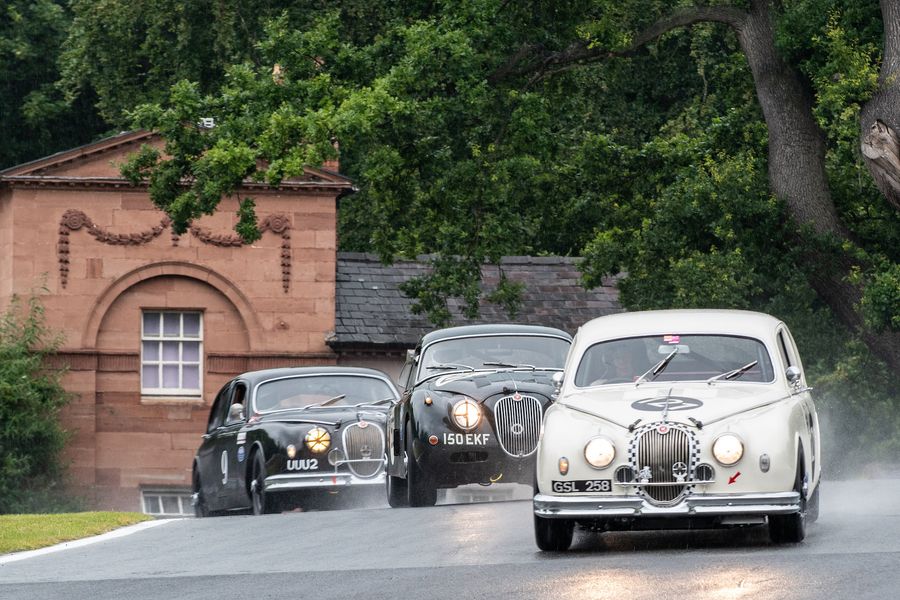 AMOC Racing’s annual visit to the rolling Oulton Park circuit on Saturday July 6th started in unseasonal rain for the morning’s qualifying, but the race action and the weather heated up as the day went on and there were a series of close finishes and well-deserving winners. Amongst the races were two devoted purely to historic cars.

On the outside of the front row the Jaguar Mk1 of Darren McWhirter was slow away at the start of the Jack Fairman Cup incorporating the JEC XK and Mike Hawthorn Challenges and the Innes Ireland Cup race, but at the end the first lap he came round already clear of the field on the wet track. Pole man Marc Gordon was second in his Jaguar XK150, with fellow Jaguar racer Glenn Pearson close behind in third.

In the early laps McWhirter pushed hard to open a gap of over twelve seconds, although as the rain increased again Gordon was able to chip away at his advantage. Pearson pitted his Jaguar on lap six with an issue at the rear, rejoining down the order, Nigel Webb now third  ahead of Chris Keith Lucas, David Reed fifth in his Aston Martin DB2, the first non-Jaguar, holding off Rick Willmott’s XK150.

Reed almost spun putting Willmott right with him, only for the latter to then go wide at Old Hall the very next lap seeing Reed a second clear once more. At the front, McWhirter was now in tune with the conditions and once more over ten seconds clear, Gordon with an even bigger advantage over Webb, Reed now again having to defend from Willmot.

McWhirter was able to hold his advantage to the end, a fine drive in the conditions and first of the Mike Hawthorn cars, Gordon headed the XK runners and was equally secure in second with Webb third as the Jaguars dominated the podium. Keith-Lucas was fourth with the battle of the race for the next position over the line, Reed just holding off Willmott for fifth and the Jack Fairman Cup win in the final laps, the rapidly recovering Pearson close behind. The MGB of Henry Rice was the first of the Innes Ireland Cup cars home.

“I just about got the car away at the start, “ said McWhirter. “The track was ok at the start of the race but then got greasy as I think some oil was down but it was good fun, you had to find the right pace in the conditions.”

The final AMOC Racing event of the day was the ever-popular Pre-War Team Challenge, a handicap event which saw the cars released at set intervals for the eight-lap race. The Aston Martin Le Mans of Christopher Scott-MacKirdy was first away, with Jo Blakeney-Edwards’ Frazer Nash Supersport last to start one minute and 55 seconds later.

The early leader was the diminutive Austin Seven of Robert Moore which had started with a lap on hand on the rest of the field, and managed to stay clear for the first six laps as the quicker cars closed in. Scott-MacKirdy , circulating 15-seconds a lap quicker, went past with a lap to go, but from fifth on lap one the car climbing the order quickest was the Aston Martin Ulster of John Briggs, who passed Scott-MacKirdy on the final lap and crossed the line just four and a half seconds clear after over 20-minutes of exciting racing.

“It was nice to head home an Aston Martin one-two-three!” said Briggs. “I wasn’t expecting the win, I thought I would be miles back, but I had some good ding-dongs on the way through and it was far more fun than in the wet this morning!” 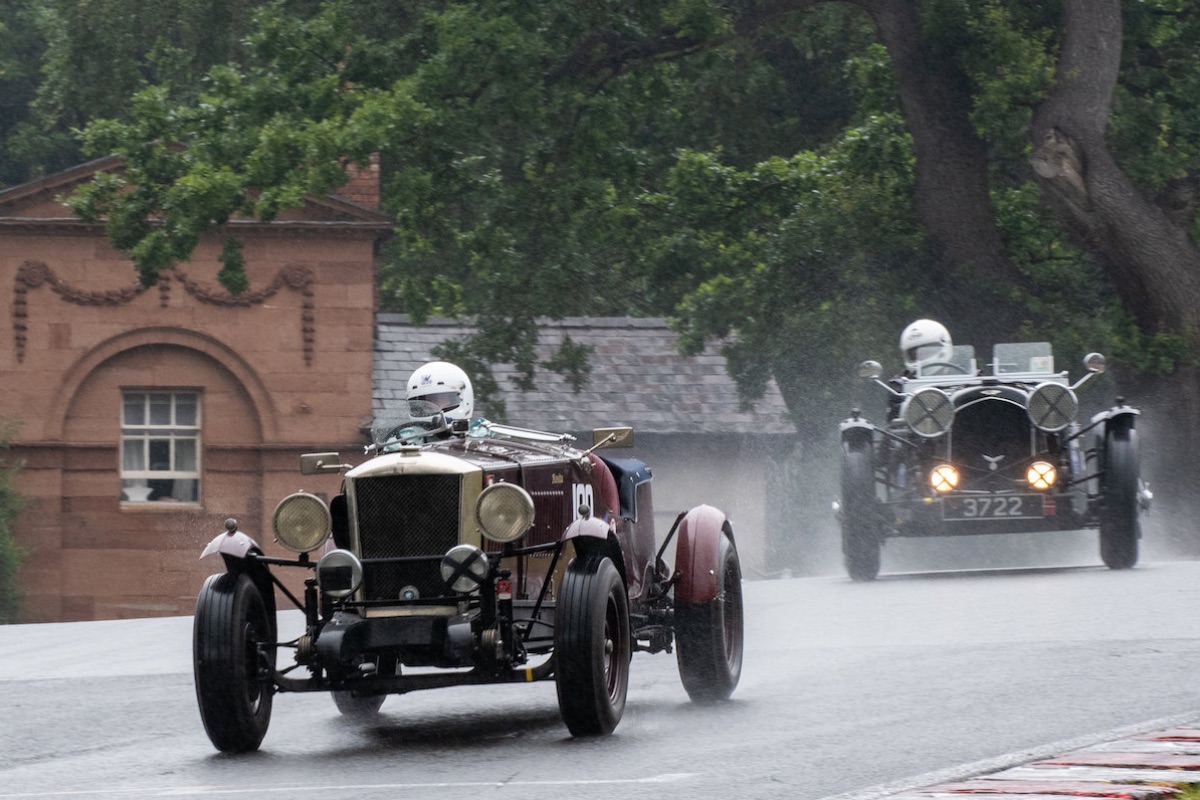