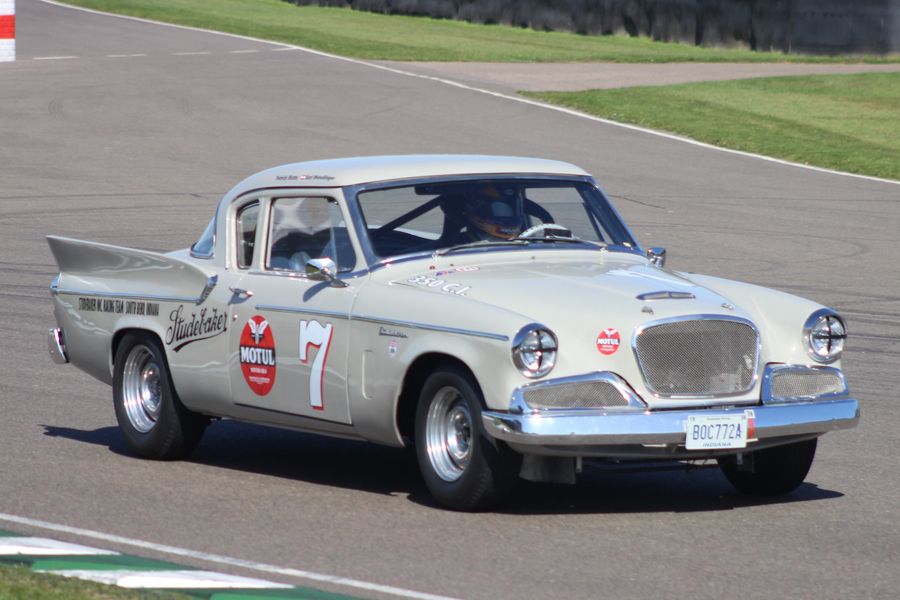 Our feature race for today at the Goodwood 2019 Revival is the first of the two St Mary’s Trophy races – with the ‘pro’ drivers in the cars and the ‘owners’ driving tomorrow, with the overall win the aggregate of the two race times. On pole after yesterday’s official practice was the mighty Studebaker Silver Hawk shared by Karl Wendlinger and Patrick Watts, with Goodwood regular Emanuele Pirro in the middle of the front row in his Alfa Romeo and Nicolas Minassian’s Austin A40 on the outside.

At the start it was Romain Dumas in a Ford Thunderbird from the second row who was leading by halfway round the opening lap, but further back in the pack rally ace John Haugland speared off hard in his Volvo bringing out the red flags. The extensive damage to the tyre wall saw the cars taken back to the collecting area, and the race resumed some time later with the duration reduced to 20-minutes.

The American challenge was dented early on as Dumas retired to the pits after two laps trailing smoke, Wendlinger using his horse power advantage to open a gap of around eight seconds by half way, Pirro over three seconds clear of Minassian, the rest around six seconds further back.

While Wendlinger was clear at the front, there was a cracking battle in the middle of the top ten, with Marcel Fassler picking cars off to move up the order in his Austin A40, while the similarly mounted Tom Kristensen battled with Anthony Reid’s Jaguar. The latter battle came to a head with just a few laps to go as Reid changed his line to look for a way past John Cleland’s Volvo, not realising Kristensen was starting to get alongside, and both lost time, Reid suffering more as he spun down the order.

In the very final laps Pirro and Minassian closed on the leader, which could pay off in part two tomorrow, when Minassian will hand over to the rapid Mike Jordan, and they crossed the line in that order. It was a race with a surprising attrition rate, with in addition to Dumas names such as Karun Chandhok, Mat Jackson, Marino Franchitti, Darren Turner and Benoit Treluyer all retiring, taking them out of contention for the overall victory.

Further drama came an hour and a half after the race when a revised set of results were issued, with six cars excluded from the results for 'non-compliance'. Wendlinger's Studebaker was one of the cars thus erased from the finishing order, moving Pirro to first from Minassian, the ruling plus the high number of retirements seeing just 14 cars classified as finishers from a field of 28!