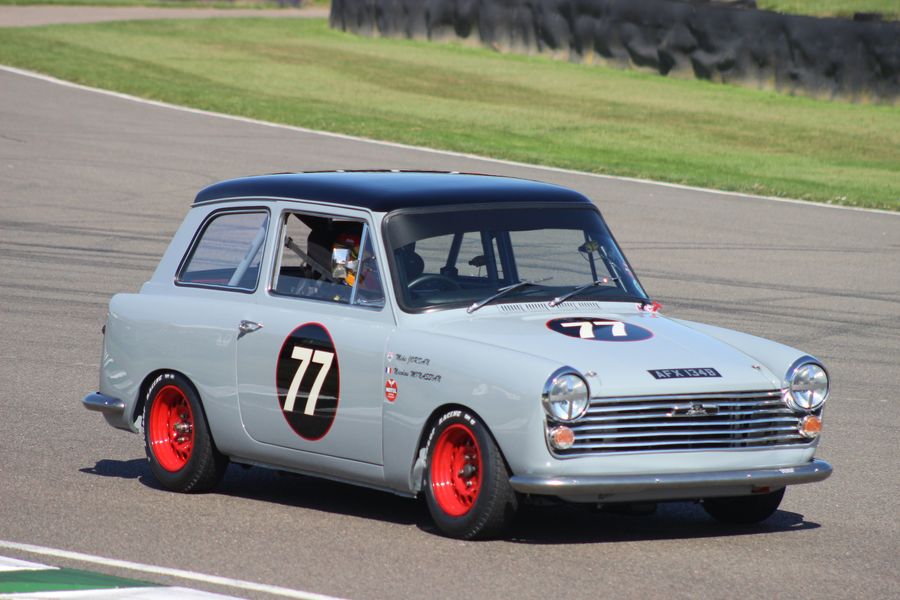 The St Mary’s Trophy delivered again at the 2019 Goodwood Revival, Sunday’s second race a thriller which saw Grant Williams take the win by just over a tenth of a second from Mike Jordan - the second place from Jordan matching where Nic Minassian finished that car yesterday to give the pair the aggregate victory. In another of the exclusions that have beset the race this year, later in the evening the Williams Jaguar was removed from the results, giving Jordan the race win as well as the overall victory.

The Studebaker Silver Hawk of Patrick Watts was on pole, the cars excluded from yesterday’s race allowed to run today but with no possibility of an overall win, but it was Richard Meaden in the Alfa Romeo that Emanuele Pirro won race one in who got the best start. Meaden was ahead into the first corner, but the moment the track went straight again the Studebaker was past, while behind Jordan’s Austin A40 was third with the Jaguars of Grant Williams and Justin Law close behind.

In the early last Meaden was able to dive past the leader as Watts braked into Lavant, only for the big V8 to power back past on the run down to Woodcote. Williams, and briefly Law, got past Jordan, and into Lavant on lap four Meaden went by again - only to be passed not only by Watts but also by Williams as they powered down the straight.

As Law fell away the lead four opened a gap on the rest of the field, with seldom more than a second’s gap between any of the cars. Out of the chicane on lap seven Williams got alongside the Studebaker of Watts and it was the Jaguar just ahead over the line and into the lead. Meaden also went past on the next lap, Watts only managing to hold off Jordan for one more lap as he started to hit car problems.

Meaden was right with Williams over the next few laps, the leader a delight to watch as he had the Jaguar n the edge of adhesion and even sliding through some corners. That battle was over on lap 14 when Meaden slowed an pitted the Alfa Romeo, and from a second behind the leader Jordan start to close in, while behind Watts seemed to get the measure of his car issues and set a new fastest race lap as he also closed back in.

Into the final lap Jordan was right with he Jaguar but Williams never left an opening, and even when Jordan looked to the inside at the chicane he had to tuck back in - the diminutive Austin just losing out on the drag race to the chequer flag.

“The car was starting to misfire and I was saying ‘don’t let me down’” said Williams. “That was a race of biblical proportions, my father did everything he could to get this car here and I can’t thank him enough.”

“I think I revved it to nine and half coming out the chicane on the last lap!” said Jordan. “It was an epic race it is a shame Dickie [Meaden] had a problem.”

“Towards the end my clutch was slipping, the brakes were going, it was all getting dodgy but was really good fun,” said Watts. “It is great to race with these guys.”

Video: Benn Tilley Takes his Lotus to Victory at Croft