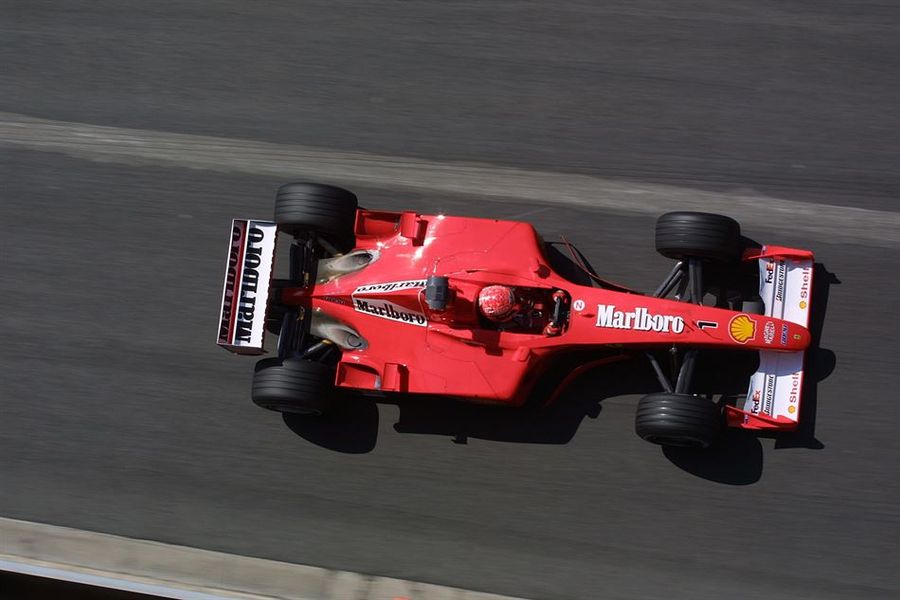 Photo: LAT
One of the most historically significant Formula 1 Ferraris was presented by Sotheby’s at auction in their Contemporary Fine Art auction in New York on November 16th and was sold for $7.5m (£5.7m), well in excess of the $4-5.5m estimate from Sotheby’s prior to the sale.
Chassis F2001 #211, which contested the 2001 Formula 1 world championship, is the car in which seven-time world champion Michael Schumacher won the last of his five Monaco victories and in which he secured his fourth world title, with victory at the Hungarian Grand Prix.
The F2001 was a product of the fabled Ferrari ‘dream team’ led by Jean Todt, Ross Brawn, Rory Byrne and Paolo Martinelli, and it was the dominant machine of the season. It allowed Schumacher to match the outright record for Formula 1 wins – 51, held since 1993 by Alain Prost – then surpass it on his way to a new mark of 53 wins by season’s end. Schumacher would go on to take 91 Grand Prix wins during his career.
During the 2001 season, Schumacher won a total of nine grands prix in the F2001, taking the title at round 13, the Hungarian GP. His points tally of 123 almost doubled that of his nearest challenger, David Coulthard, who scored 65.
Schumacher’s 2001 title was his fourth of seven and his second consecutive title for Ferrari. It came during a sequence of five straight drivers’ and constructors’ title wins for Michael and Ferrari between 2000 and 2004 – a period during which team and driver achieved new standards of excellence and set records which may never be broken.
The F2001 represented early noughties state-of-the-art F1 chassis design, with its downforce-enhancing low nose and a tightly tucked Coke-bottle rear engine surround. Ferrari found further advantage by working hand-in-glove with Japanese tyre partners Bridgestone, who were fine-tuning their compounds and constructions to suit Schumacher’s particular requirements. Behind his shoulders sat a Ferrari Tipo 050 three-litre V10 engine, pushing out between 800 and 900bhp, depending on its state of tune, through a seven-speed semi-automatic transmission. Its scream at peak revs of 18,500rpm will never be forgotten by any who heard it.
So good was the F2001 that it started the 2002 season in lightly modified form and proved quick enough to win the season-opener in Melbourne, Australia. That would prove the final victory for a distinguished racing machine, before it was succeeded by the F2002 – another title-winner for Schumacher and Ferrari.