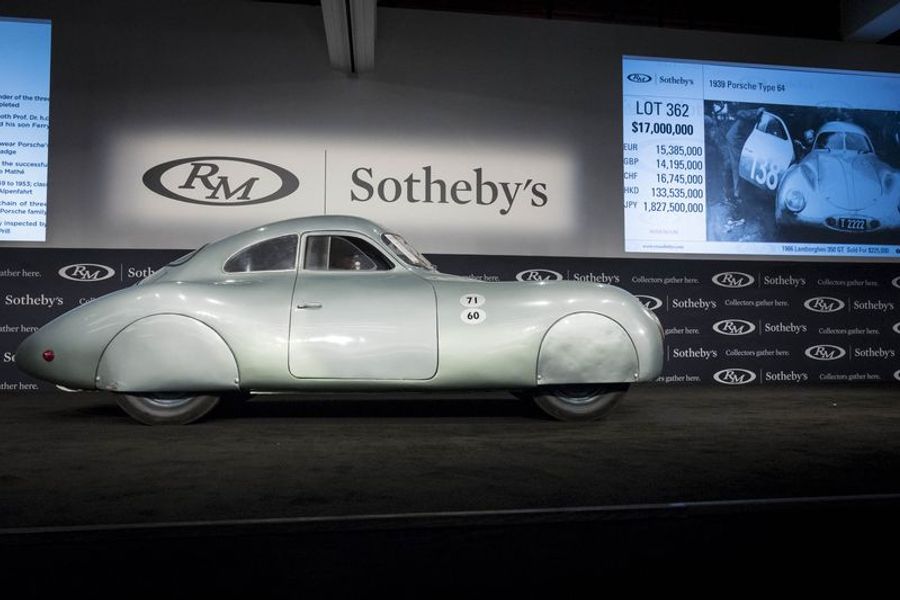 Was it a mere lack of distinct pronunciation?  Was it a human graphics error?  Or, was it something nefarious? We may never know.  What we do know is that the much bally-hoed and hyped Type 64 offered by Sotheby’s did not sell amid a raucous and very confusing three to five minute span.

The Type 64 is recognized as the first sportscar designed by Ferdinand Porsche during his pre-war consultancy with Volkswagen, and the only one of three built to survive World War II (see video below).

Porsche AG was quick to distance itself from the car.  In fact, during the pre-event hype, Stuttgart issued a press communication stating that while the car was the design and brainchild of Ferdinand Porsche, and despite having the Porsche Script name on the hood, the car was distinctly NOT a Porsche and pre-dated the forming of the company by nearly a decade.

Expert opinion varied on what the market value was of this literal one of a kind car and so anticipation was high when the car rolled out from behind the curtain to be offered at auction.

What began as seemingly fevered bidding proved, as this video posted by Ian Karr shows, to be a comedy of errors between the auctioneer, the video board operators, and the bidders in the audience that ended with groaning discontent.

The confusion ultimately stopped bidders from continuing.  Was the bid 70 million or 17 million?  Why was it increasing by 10 million increments when the auctioneer was working at 500 thousand dollar increments?  That increment does lend credence to the auctioneer’s immediate explanation of the situation that it was pronunciation confusion. However despite his frustrated urging the bids stopped at 17 million dollars.  That proved to be below the reserve so in a very unsatisfying end for the participants the car was rolled off the block and not sold.

HistoricRacingNews.com reached out to Sotheby’s asking for a statement on this sale but our request was not answered.