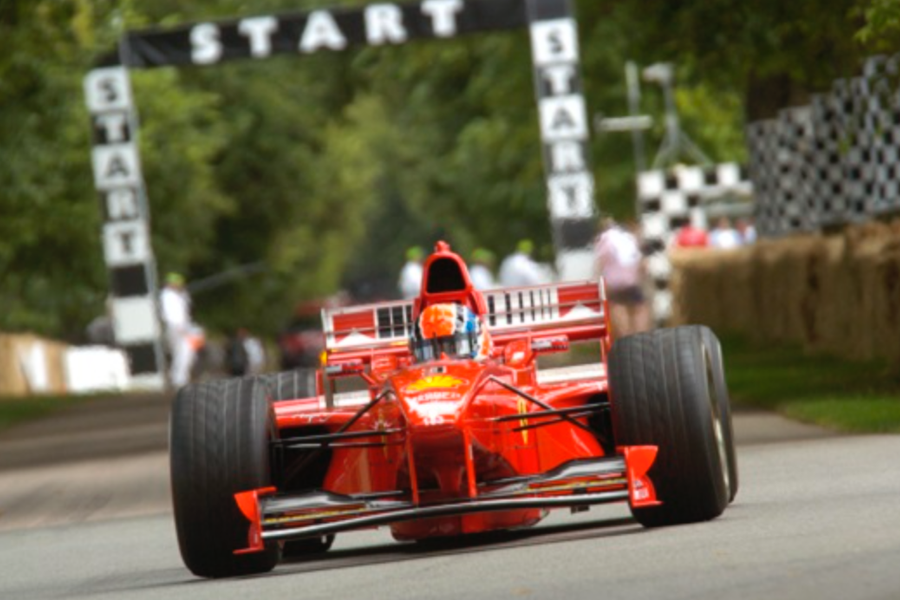 Goodwood has announced that the 2019 Festival of Speed will celebrate the remarkable career of Michael Schumacher, with his famous cars, family, friends, team-mates and former rivals, including World Champions Mika Hakkinen and Damon Hill, all coming together in a unique tribute to Formula 1’s greatest record-breaker.

This year marks not only Schumacher’s 50th birthday, but also the 25th anniversary of his first of seven Formula 1 World Championships.

To celebrate his record-breaking career, Goodwood is organising a special tribute to him at the Festival of Speed on 4th-7th July. Schumacher’s entire career will be celebrated, with cars from his time in sports and touring cars, the junior categories and, of course, his Formula 1 career, which spanned 21 years and more than 300 races.

The theme at this year’s event is “Speed Kings – Motorsport’s Record Breakers” and, with 91 Grand Prix victories and seven world titles to his name, it is a perfect year to honour Formula 1’s greatest record breaker. Damon Hill will also take to the Hillclimb in one of Schumacher’s iconic cars as a nostalgic moment to commemorate their notable rivalry and sportsmanship.

Sabine Kehm, spokesperson for the Schumacher family, said: “We are delighted that the Goodwood Festival of Speed has chosen to celebrate Michael’s career, in the year of his 50th birthday, and on the 25th anniversary of his first World Championship. It is especially fitting this year, as the event’s ‘Record Breakers’ theme perfectly encapsulates his incredible achievements, including records, many of which may never be broken. We hope the public enjoy the opportunity to see an assortment of his winning cars, and the many friends, rivals and team members, who are coming to Goodwood to support the occasion. We thank the Duke of Richmond and the Goodwood team for making Michael such an important feature of this year’s event.”

Schumacher started his motorsport career in karts and, after several titles, moved into Formula 3 and then sports cars with Mercedes-Benz. His Grand Prix debut came in the 1991 Belgian Grand Prix, when he stood in for Jordan’s Bertrand Gachot. His long-time manager Willi Weber was asked by Team Principal Eddie Jordan whether he had been to Spa, to which the answer was ‘yes’. Weber neglected to say that it was as a spectator.

No matter, Schumacher put his Jordan 191 seventh on the grid, – the highest starting position for the team to date, and over half a second faster than seasoned team-mate Andrea de Cesaris. While his clutch went on the first lap, the stage had been set. He was signed by Benetton for the rest of the season and, only three years later, he would seal his first world championship.

By the time he moved to Ferrari for the 1996 season he was a two-time champion and, with the help of Jean Todt and Ross Brawn, dragged the Italian team back to the front of the grid. In 2000, he became Ferrari’s first Drivers’ Champion since Jody Scheckter 21 years earlier.

The wins, and championships, kept coming and, having won 91 Grands Prix, he retired at the end of the 2006 season. He returned in 2010 for Mercedes, but despite a podium finish in 2012, he didn’t manage the heights of his first career. While his time in F1 was sometimes overshadowed by poor on-track decisions, his thirst for victory and supreme car control was never in doubt. He still holds over 20 records in the sport, some of which may never be beaten.

In late 2013, Schumacher suffered a severe head injury while skiing, and has been rehabilitating since at his home in Switzerland. His son Mick has shown huge promise in the lower categories of the sport, having won last year’s European Formula 3 Championship and looks ahead to his F1 test debut this weekend in Bahrain.