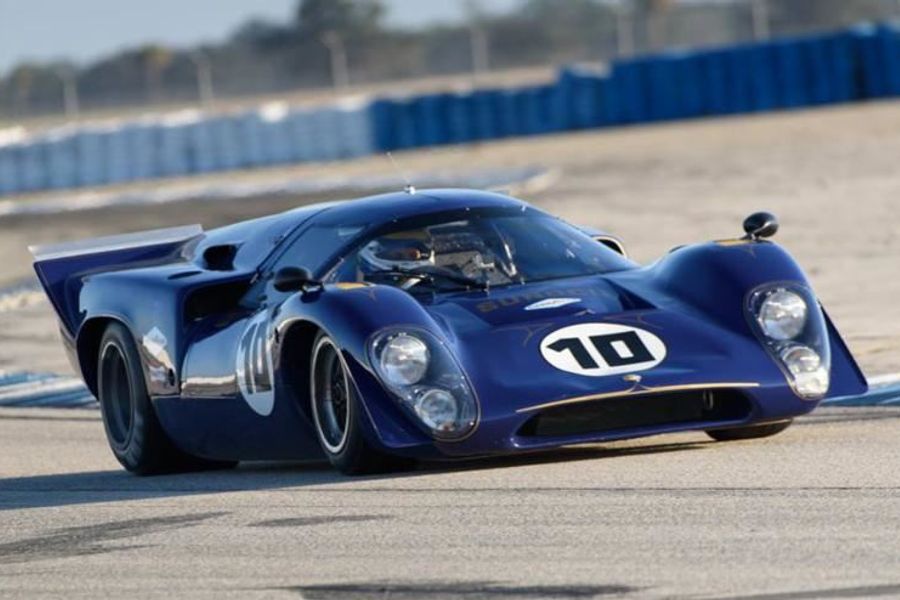 A high-speed celebration of Sebring International Raceway's rich auto racing and aviation history came to a successful close on Sunday when five Historic Sportscar Racing (HSR) Classic 12 Hour at Sebring Run Group Champions were crowned after three days of close and competitive racing.
Officially named the Classic 12 Hour at Sebring, Pistons and Props, presented by the Alan Jay Automotive Network and Classic Motorsports, this weekend's inaugural event paid tribute to the legendary 12 Hours of Sebring auto race and historic Hendricks Field, the iconic military and civil aviation facility on which the race will be run for the 65th time next March.
With historic race cars from the last 50-years on the track and vintage airplanes flying in to be on full display, the debut Classic 12 Hour was a success by any standard of measure. The event attracted 110-entries and was witnessed by the largest crowd to ever attend an HSR race at Sebring.
Classic 12 Hour competitors were divided into five different period-correct Run Groups with each taking to the legendary Sebring International Raceway road course four different times for 42-minute race segments over the last three days. The competitors in each Group that completed the most overall distance at the end of their division's four segments were crowned inaugural HSR Classic 24 Hour Champions.
Each overall Group winner was presented with a special-edition B.R.M. Chronographes watch commissioned specifically for the Classic 12 Hour at Sebring. The timepieces feature an engine-turned face and crown engraved with the Classic 12 Hour at Sebring logo.
Group A was home to classic sports cars primarily from the 1960s and produced some of the best racing of the weekend. The 1969 No. 10 Lola T70 of Gerard Lopez and Frantz Wallenborn, which was brought to Sebring by the Art & Revs team out of Luxembourg in Europe, prevailed in a tight tussle with the similar Switzerland-based Lola of Toni Seiler.
Seiler finished second in his Swiss-based No. 77 Lola T70 while Harry McPherson, who co-drove with Motorsports Hall of Fame of America member Elliott Forbes-Robinson, finished third in his 1968 generation No. 2 SPF Ford GT40.
John Harrold and accomplished pro driver Randy Pobst co-drove to a commanding victory in Group B in Harrold's Team Mean 1979 No. 94 Chevron B23/36, which is prepared by KMW Motorsports.
Second-place in Group B went to the Heritage Motorsports 1973 No. 131 Porsche 911 RS of French co-drivers Gilles Boyer and Franck Ravé while Jerry Peters and Brady Refenning came home third in the 1974 No. 8 Porsche 914/6 GT from the 901 Shop.
Another prototype as iconic as the victorious Lola T70 and Chevron B23/36 took the overall victory in Group C/D. Racing a 1996 No. 4 Riley & Scott Mk III prepared by GMT Racing, Rick Carlino and Derek Jones scored the win despite a race-long challenge from twin brothers Hamilton Harris and Hunter Harris. The Harris brothers, co-driving the WireWheel.com 2000 No. 9 Lola B2K/40S, chased the Riley until just running out of fuel in the closing minutes of Sunday afternoon's fourth and final segment.
The Harris twins held on for a second-place finish while third-place Group D honors went to Dutchman Theo Ruijgh in the 2000 No. 114 Porsche 996 GT3R.
With 2015 Le Mans 24 Hour LMP2 winning co-driver Richard Bradley joining the team, the GMT Racing 2007 No. 18 Pescarolo Judd LMP of David Porter scored the Group E victory. Porter and Bradley shared the Pescarolo equally in a flawless run to the checkered flag.
Second-place in Group E went to Juan Gonzalez and Butch Leitzinger who co-drove a 2010 No. 52 Oreca FLM09. Travis Engen finished third in Group E in his 2005 No. 2 Audi R8 LMP prepared by GMT Racing.
Home to HSR classes not represented in the other groups, Group F featured some of the most diverse action of the weekend. The overall victory went to the 1974 No. 51 Porsche 911 RSR of Hartmut von Seelen who co-drove with KMW Motorsports owner Kevin Wheeler.
Mike Banz, who enlisted Jim Pace to drive his Heritage Motorsports 1974 No. 13 Porsche 911 RSR in Saturday's night segment, drove in the other three rounds and finished second in Group F.
Third place in Group F went to the father-and-son duo of Jack Refenning and Brady Refenning in their 901 Shop 1974 No. 28 Porsche 911 IROC.
Lola HSR Lola T70 Sebring Sebring 12-Hours