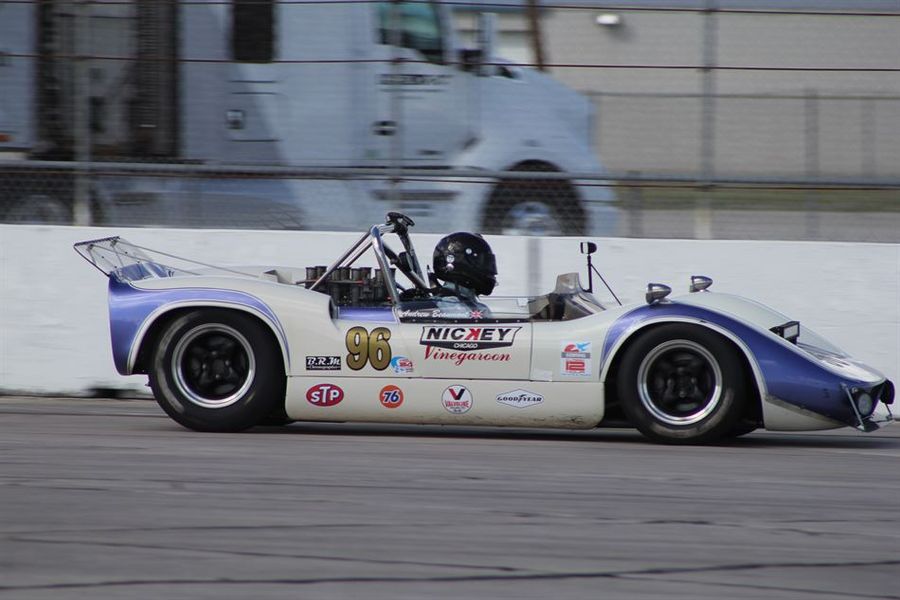 The Group A cars started the festivities at Noon and the afternoon saw exciting competition in all of the groups.

After two sessions Group A is lead by the McLaren MIB of Andrew Beaumont and Nigel Greensall.  Session one was dominated by the Lola pair of Toni Seiler and Beat Eggimann in their Lola T70s, the former in a coupe MkIIIb and the former in a spyder version T165.

In the second session Greensall and Beaumont used pit strategy and some blazing laps by Greensall to turn a 15 second deficit into a 30 second lead.

In Group B Altrid Heger has proven to be the man to beat in his 1976 Porsche 935/K1.  He was able to hold sway over the Chevrons of Ryan and John Harrold teamed with Kevin Wheeler in the #94 B23/36 and Gray Gregory teamed with Randy Buck and Ian MacAllister in the #26 B26.  The Gregory car had a rough go in the second session and came back on the hook after the race.  If the team can make repairs during the break between sessions the second half of the race will be a comeback drive for that team.

Group C is the fastest of the groups and will most likely be the class that gives us the virtual over all winner of this year’s Classic 12-Hour.  John Reisman and Eric Curran lead in their Coyote/Corvette DP.  Butch Leitzinger and Juan Gonzalez are one minute 47 seconds behind in the 2007 Pescarolo Judd.

Group D saw Rich Thomas parlayed two wins to take a one minute 13 second lead over the Porsche 997 of Mac McGehee and Cory Friedman.  Cody and Bruce Ellsworth in the 2012 Porsche 997 are third the only other car on the lead lap.