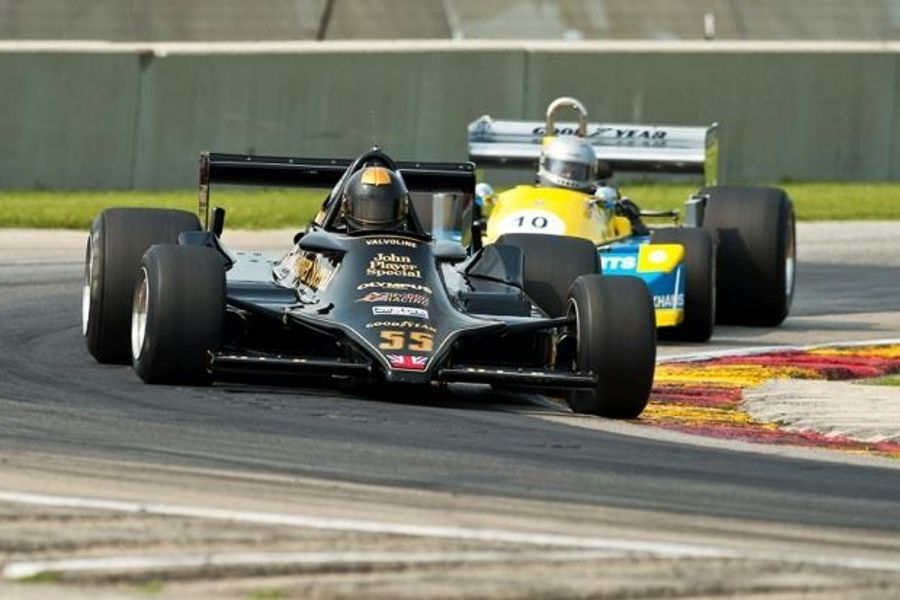 In a truly Anglo-American weekend, honours in Masters HGP at Road America fell to Brit Greg Thornton and American Doc Bundy. Masters HGP moved to America for its third weekend of its inaugural season, to the ever-popular four-mile circuit at Road America. The event, The Hawk, is one of the longest-standing and well-supported vintage race meetings in North America. Bud Moeller started from the back of the grid for the opening race, his Ensign MN179 having hit dramas in qualifying, forcing a switch to his Ferrari 312-T5. Doc Bundy (Lotus 79) was on pole position and he took command over the first couple of laps, easing away from Greg Thornton (March 761) until he suffered gear selection problems on lap two which put him out of the race. Thornton took control of the race, ahead of Howard Cherry (March 761) and Chris Locke (Lotus 77) while Bud Moeller put in a sterling drive to take the Ferrari from the back of the grid to sixth overall. The results from race one set the grid for race two, and at the back of the grid was Doug Mockett (Wolf WR6) who rejoined the event having piloted his own jet on a three-hour flight from Sun Valley. Thornton led the grid away and held the lead briefly until a rogue pit-in board was displayed on the final corner causing confusion amongst the front-runners, which included Bud Moeller who was lying second at the time but lost a front wheel and suffered suspension damage under hard braking. Thankfully Bud walked away unhurt from what could have been a nasty accident, but the Ferrari was badly damaged. During all this, Chris Locke in his Lotus 77 had made his break for glory, with Howard Cherry, who had been flying, sidelined with gearbox problems. A great battle developed between Bob Blain and Greg Thornton for podium honours. In the meantime, Doc Bundy (Lotus 79) was on a mission, reeling in the front group. He was soon past the squabbling Thornton and Blain and set off after leader Chris Locke. Starting the last lap, Locke and Bundy went side-by-side and Bundy outbraked the Lotus into turn one to secure the lead, despite a last-gasp lunge from Locke, with Blain third. Charles Warner and Doug Mockett also had a great battle further down the field. Warner’s Shadow had been plagued with an infuriating intermittent misfire throughout the weekend. John Delane (Tyrrell 002) worked his way up with a fine drive to pass Warner.