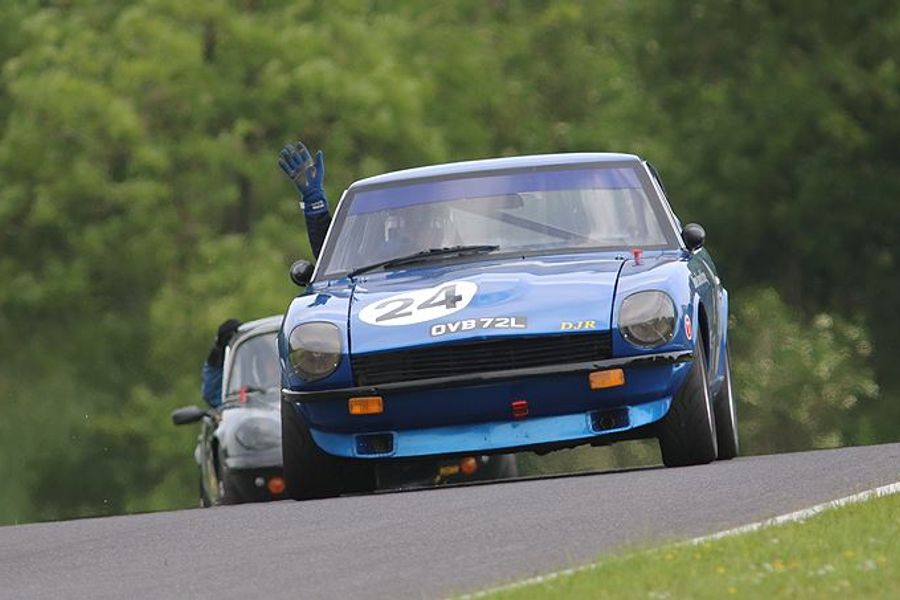 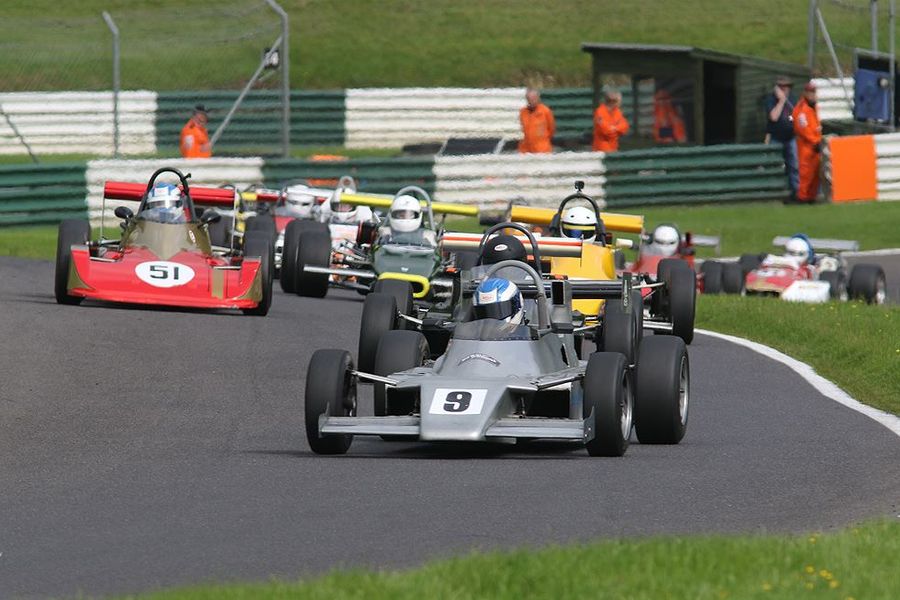 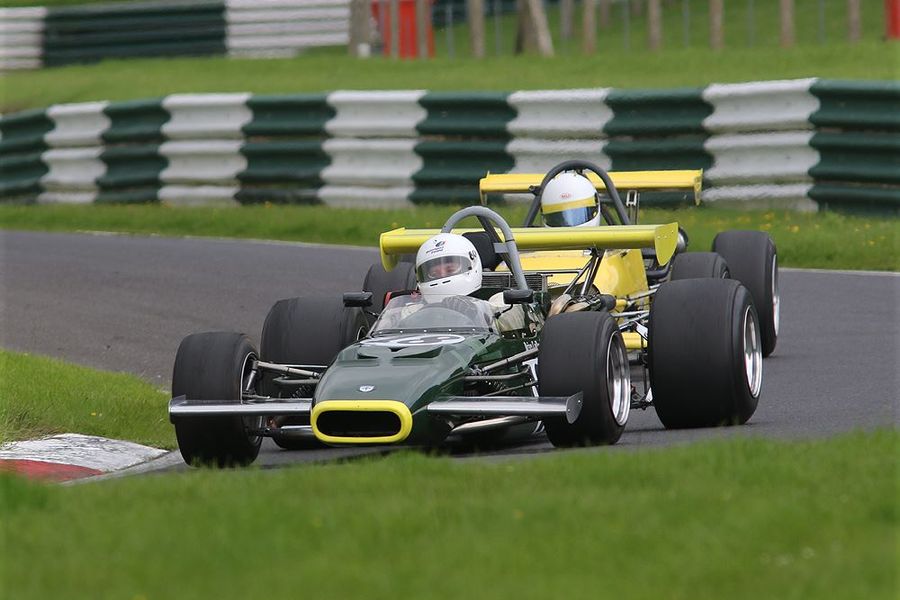 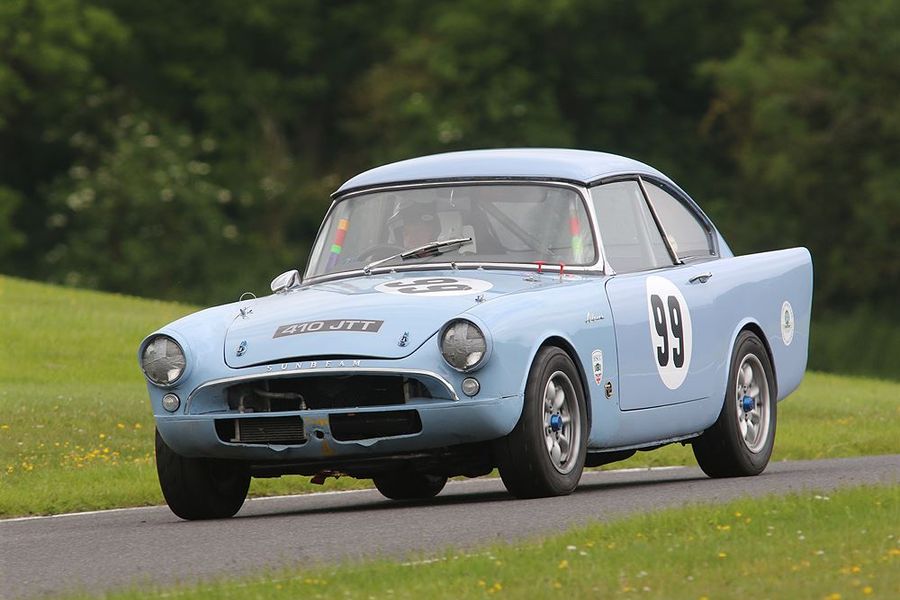 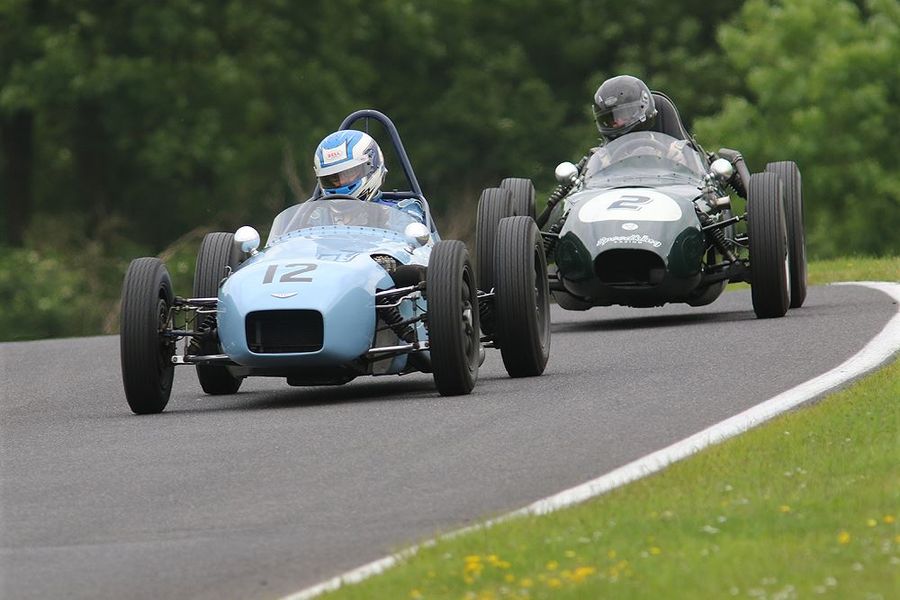 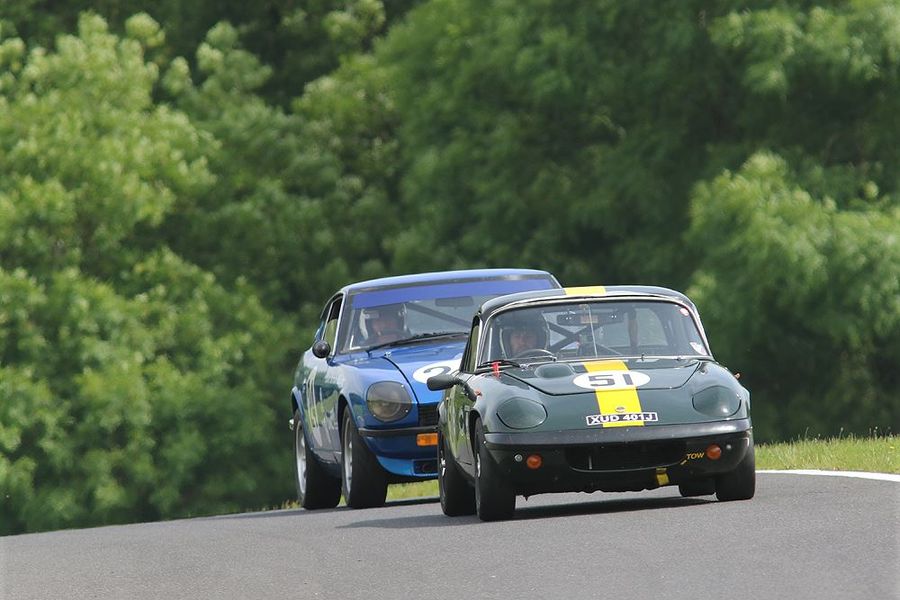 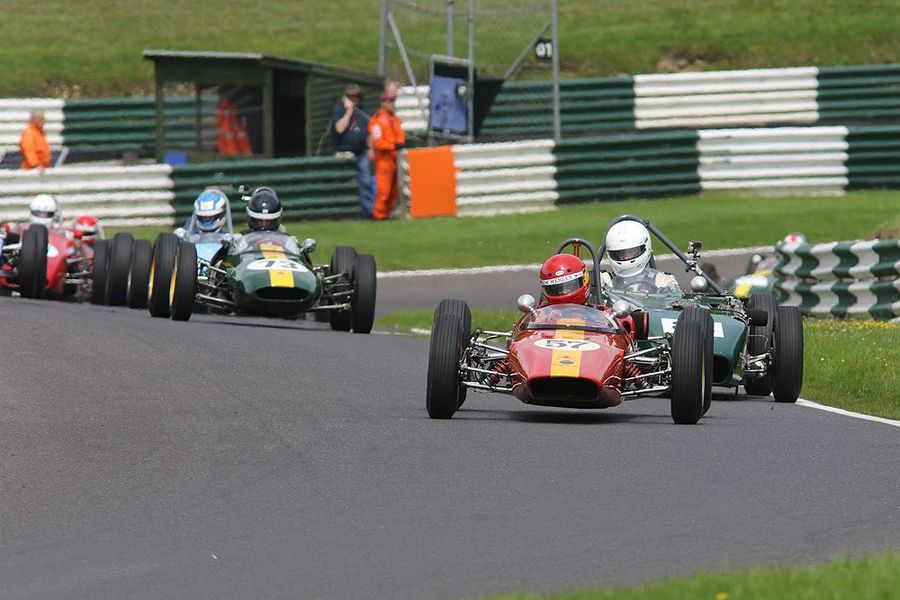 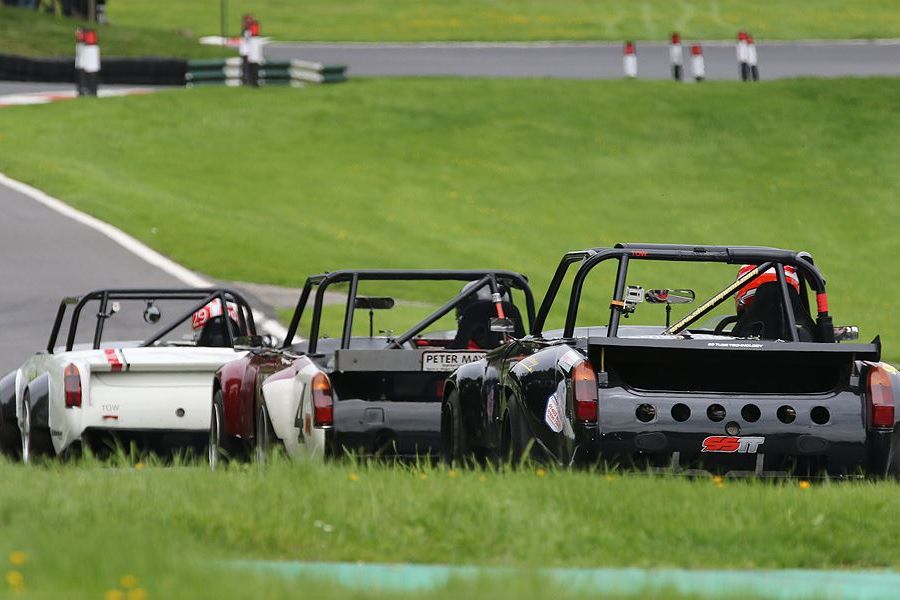 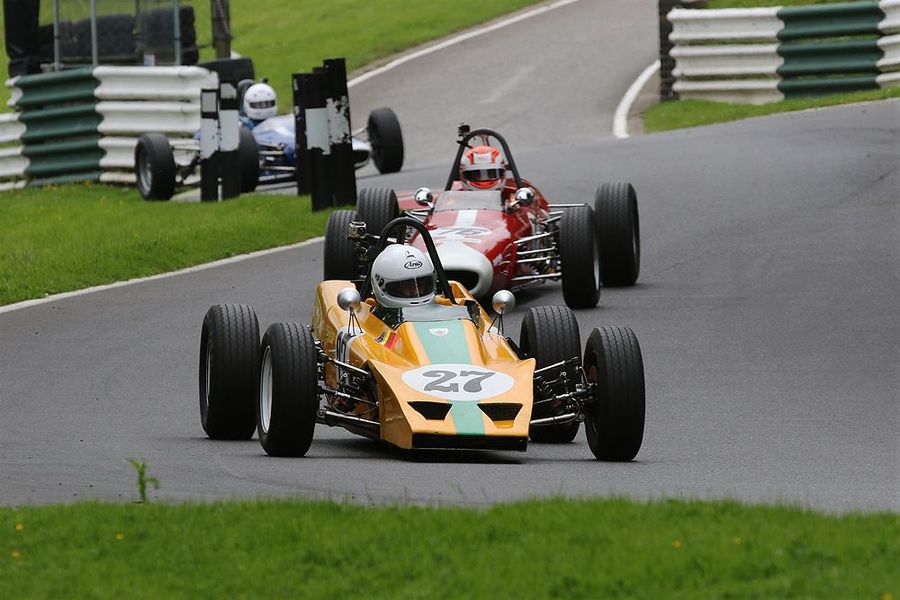 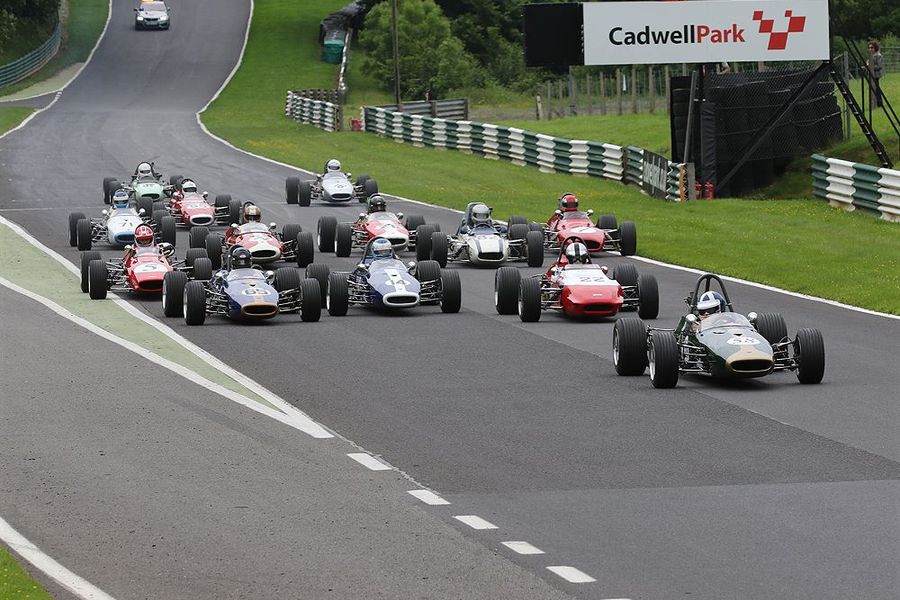 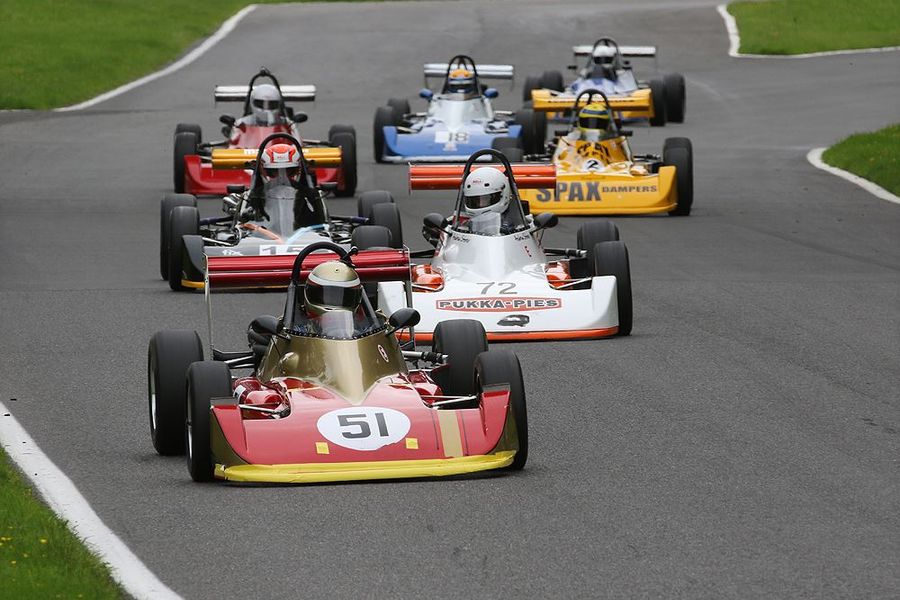 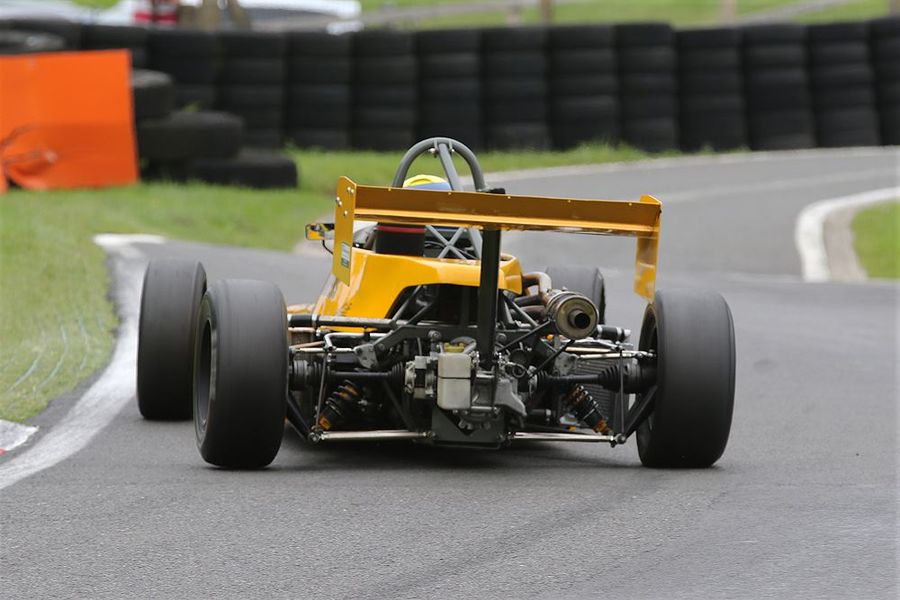 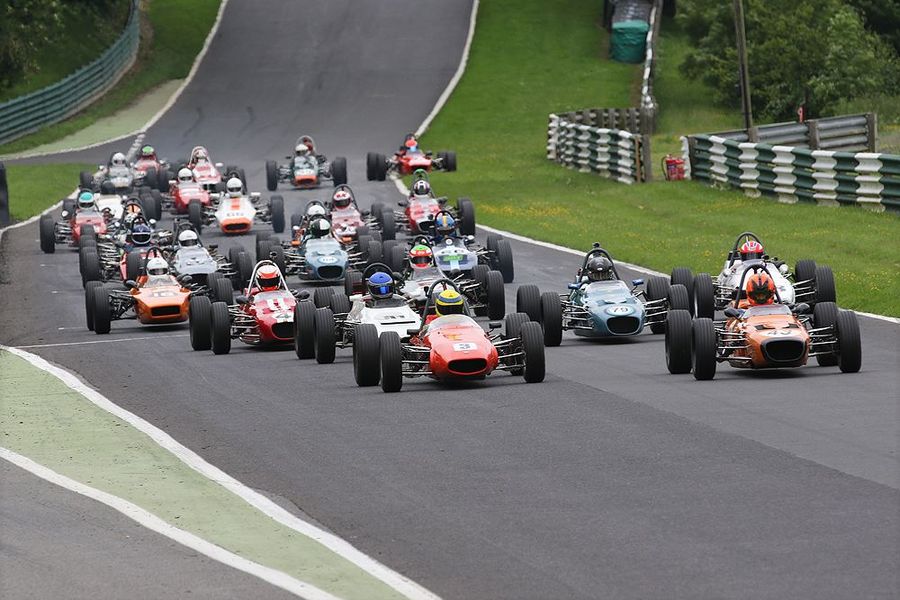 Click on the Gallery tab for images from Cadwell Park courtesy of Paul Lawrence!
The annual Wolds Trophy meeting at Cadwell Park (18th and 19th of June) delivered some tremendous racing from the Historic Sports Car Club’s categories as a good crowd enjoyed a warm and dry weekend.
The weekend celebrated two drivers who were part of the inaugural Griffiths Formula race at Castle Combe, the event that led to the creation of the Historic Sports Car Club. Back in 1966, Ivan Sharrock and Chris Drewett raced at Castle Combe and they were at Cadwell to present some awards as the club’s 50th anniversary celebrations continued.
There was no Father’s Day gift for Charles Barter in the 70s Road Sports Championship as his son Julian pushed him hard in an absorbing race-long contest on Sunday. Julian won the opening race in his Lotus Elan, but Charles was inspired on Father’s Day and earned his present the hard way in his Datsun 240Z to win by three-quarters of a second.
Maintaining the Father’s Day theme, Stuart Roach and his father Keith raced in the HSCC/FJRHA Silverline Historic Formula Junior Championship and Stuart won three of the weekend’s races in his front-engined Alexis Mk2 and rear-engined Condor S111. However, in the second rear-engined race the Condor lost third gear and then oil pressure, so Roach was denied a clean sweep of four wins. Instead, there was a memorable result for John Sykes (Merlyn Mk5/7) who took his first overall race win.
Nearly 40 cars arrived in Lincolnshire for the Historic Formula Ford 1600 Championship and delivered some fantastic racing across four races. The big winner was Callum Grant, who won both races, in his Merlyn Mk20. However, neither win was easy as Benn Simms pushed him hard in the first race and Rob Wainwright was only a third of a second behind on Sunday as impressive teenager Benn Tilley completed the podium.
Jon Milicevic (Brabham BT21B) was another double winner as two races for the Historic Formula 3 Championship remembered racing journalist Justin Haler. On Sunday, an inspired Ewen Sergison led the early laps in his Brabham BT21 and was still well in touch at the flag despite a strong challenge from Simon Armer (March 703).
Andrew Park maintained his early season form in the Historic Formula Ford 2000 Championship with two more wins in his Reynard SF81. He’s now taken five wins and a second from the opening six races, although a tangle with Benn Simms in the opening race ended a fierce lead contest.
The URS Classic FF2000 and Classic Racing Cars fields shared a grid and delivered double wins for Ian Pearson (FF2000 Van Diemen RF83) and Andy Jarvis (Palliser WDB2), although Brian Cullen (Crossle 19F) headed Jarvis in the opening laps of the first race.
Peter Shaw (Lotus Elan) and Kevin Kivlochan (Morgan Plus 8) shared the wins in the Historic Road Sports Championship, with Kivlochan moving ahead on Sunday when the Elan retired with ignition dramas. Dave Boland (Ginetta G4) chased the Morgan home.
The ByBox Historic Touring Car Championship allowed John Avill (Lotus Cortina) a weekend double despite considerable pressure from Graham Pattle (Lotus Cortina) in race one and Simon Benoy (Hillman Imp) on Sunday. Pattle was chasing hard on Sunday when his car suffered a spectacular transmission failure as it crested the Mountain.
Completing a very full weekend were rounds of the Classic Clubmans Championship, where Mark Charteris (Mallock Mk20/21) was unstoppable and two rounds of the Lackford Engineering Sprite and Midget Challenge won by David Weston.
Cadwell Park Historic Sports Car Club Paul Lawrence Wolds Trophy Gallery

FF1600s Star for the HSCC at Combe