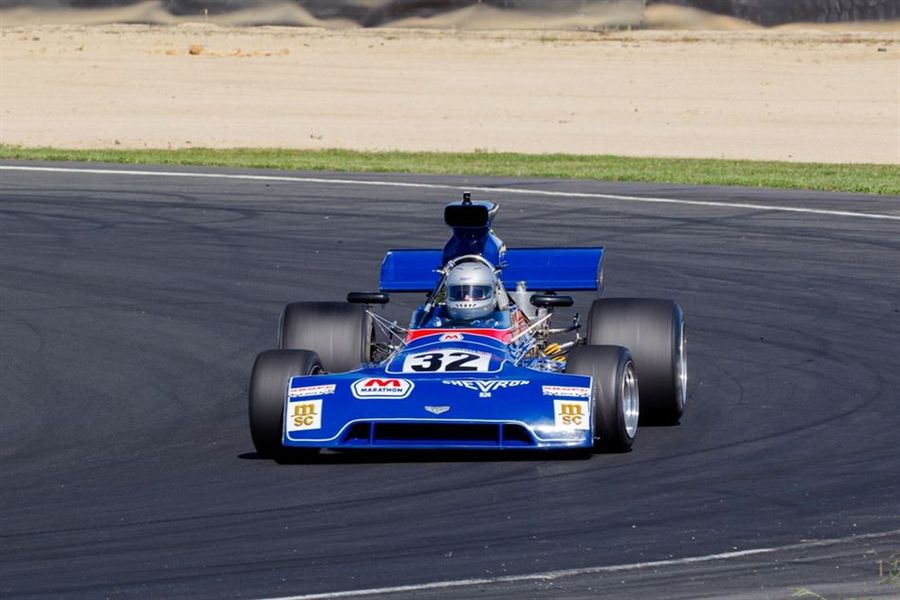 Entries for the Race of Champions Revival that book-ends the inaugural Taupo Historic GP this weekend at Bruce McLaren Motorsport Park closed last Friday with a line-up of 26-Formula 5000s and nine-Formula One cars – beating by one car the F1 entry on the only occasion the Formula Ones were beaten by an F5000 in the period race (Peter Gethin humbling the F1 “grandees” in his Chevron B24-Chevrolet at Brands Hatch in 1973).
“Interest in the race meeting is huge” says Bruce McLaren Motorsport Park Managing Director, Tony Walker.  “The weather forecast looks fantastic with clear skies and no wind and there is still accommodation available for the weekend despite a lot being snatched-up as long as six months ago.  The Taupo I-Site Visitor Information Centre (0800 LAKE TAUPO (0800 525 382), 07 376 0027, taupovc@greatlaketaupo.com) is doing a great job referring callers to accommodation providers with rooms still available.”
The Brands Hatch Race of Champions (RoC) was a regular fixture back in the era when there was space on the Formula 1 calendar for extra races – not a remote possibility in today’s 21-round World Championship.  First run on the undulating Grand Prix circuit carved into woodland 20 miles to the south east of London in 1965, in the final season of the 1500cc Formula 1, it was won by Mike Spence for Team Lotus.  Despite flashes of promise, it would stand as his only F1 victory.
The race was opened to thundering Formula 5000 cars in the early ’70s, in a bid to spice up the spectacle, fill grids and sell tickets to fans starved of racing since the previous (northern hemisphere) autumn.  Winners of the RoC in the three-litre F1 era included the man in whose honour the Taupo circuit is now named, Bruce McLaren (1968, McLaren M7A), and the dashing British public schoolboy James Hunt whose 1976 World Championship title formed the story-line of the Ron Howard feature-length movie, Rush.
Gethin’s win in 1973 was the only year it went wrong for the F1 brigade.  European F5000 champion in McLarens in its first two seasons, ’69 and ’70, the Englishman struck a monster blow for the mainly small-block Chevrolet-powered brigade when he beat the three-litre contingent to take the chequered flag in American entrant Doug Shierson’s Marathon Oil Chevron B24.  44 years later, the same car takes on the F1s again this weekend, this time in the hands of current owner, Englishman Greg Thornton.
The mix of F1 and F5000 in the 1970s saw both sides trying to harness roughly 500bhp and ending-up making similar lap times, but in very different ways. Weighing in at 575kg by the mid-’70s, the three-litre Grand Prix contenders were more aerodynamically efficient and less tyre-destructive than their thuggish rivals. Starting at well over 600kgs, the torquier F5000s had a higher centre of gravity which restricted cornering potential.
It will be fascinating to see which is the better  package this weekend in what promises to be a cat and mouse game of unmatchable F5000 acceleration off the corners versus the late-braking F1s.  Onlookers in the 1970s certainly loved it.
Pundits expect reigning 2016 FIA Masters Formula One Pre’78 champion Michael Lyons (UK, Hesketh 308E), Andrew Beaumont (UK, Lotus 76) and Tommy Dreelan (Ireland, March 761) to lead the F1 charge and their closest F5000 challengers to be indomitable septuagenarian veteran, Ken Smith MBE, and UK-based series regular Mark Dwyer (both in Lola T332s).
Michael Lyons Ken Smith F5000 Taupo Formula 5000