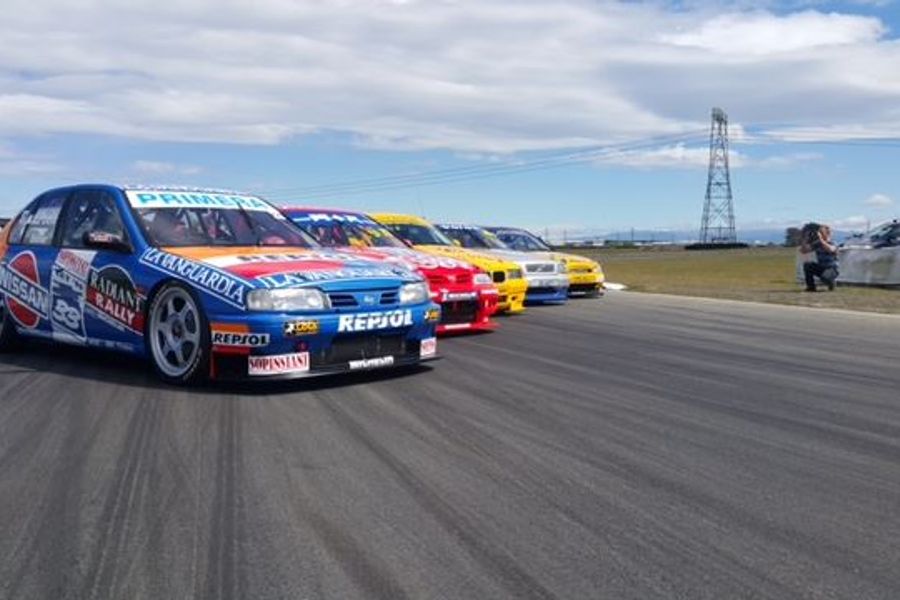 Organisers of the Historic Touring Car category racing at next month’s Taupo Historic GP in New Zealand have pulled-off a major coup – placing 1985 European Touring Car Champion, Italian Gianfranco Brancatelli in the BMW M3 he drove for the Italian CiBiemme Sport team in the 1987 World Touring Car Championship.
The now 66-year-old Piedmont native is one of Italy’s most successful touring car drivers.
After a punctuated Formula One debut season in 1979, Brancatelli switched to touring cars and over the next 12 years drove in works teams from manufacturers as varied as Volvo, Rover, Ford and of course, BMW.  He also drove a privately-entered Alfa-Romeo to the 1988 Italian Touring Car Championship title and regularly competed in the Le Mans 24 Hours as a works driver for Sauber-Mercedes, Jaguar and Nissan.
The BMW M3 that Brancatelli will drive at Taupo is now owned by Christchurch’s Peter Sturgeon.  Himself a highly respected and talented master of the touring car art, Sturgeon is happy to sit on the side-lines on this occasion.  “When Murray Sinclair, our category organiser told me that Gianfranco was interested in driving at Taupo, it was too good an opportunity to miss.  I was delighted to let him loose in his old car,” said Sturgeon.
Sturgeon’s M3 is the car in which Brancatelli partnered with another former Formula One driver, Johnny Cecotto,  to win the 500km de Bourgogne at Dijon-Prenois in France in 1987.  Brancatelli finished 8th in that year’s World Touring Car Championship while finishing 5th in the European Touring Car Championship, also for CiBiemme, winning twice at Estoril and Zolder.
Brancatelli’s 1985 European Championship was won driving for the works Volvo team in their powerful but brutal 240T.  While the BMW M3 that Brancatelli will drive at Taupo is 2.3 litre and normally-aspirated, it proved to be a more effective all-round package in the hey-day of big budget works touring car contests.
“The M3 is a real racing car hiding under road-car bodywork” says Sturgeon.  “It is smooth and a real joy to drive, especially in the wet.  The Volvo by contrast was renowned as powerful but I believe that that power was delivered with the subtlety of light switch – all or nothing”.
Historic Touring Car category organiser Murray Sinclair will also be driving at Taupo, in his 1996 Nissan Primera Super Tourer, one of two Nissan Super Tourers entered for the three Touring Car races over the Taupo Historic GP weekend.
Built for the team owned by Keke Rosberg, the 1982 world F1 Champion and father of current World Champion Nico Rosberg, the Nissan was driven to 5th overall in the Spanish Touring Car Championship by Dutchman Eric Van de Poele.
Super Touring swept away the Group A era of the BMW M3, Volvo 240T, Jaguars, Rovers and turbo-charged Ford Sierra Cosworths, bringing a 2-litre limit and technical specifications that allowed manufacturers to mix and match parts from their range as long as the engine used the same block and head and sat in the same place.  Suspension had to keep the same configuration and limits on revs, tyre size and usage gave privateers a helping hand. However, the category’s phenomenal public following meant no-one foresaw the extraordinary technical sophistication that a decade of Super Touring would bring.
Championship budgets north of $NZ20 million were talked about.
“To call it a Primera is unfair”, says Sinclair. “The motor is barely visible with the 295 bhp straight-four pressed against the bulkhead behind the drive shaft. And the intakes face straight ahead, unlike the standard car. There’s also extra piping to the double-caliper brakes because they’re water-cooled with a little radiator underneath. Suspension mimics the original but it’s all fabricated, a nightmare for restoration.  The effort that went into the special parts and hand-built shell, 1,000 man-hours, they say, beggars belief.”
Historic Touring Cars NZ Taupo Brancatelli New Zealand