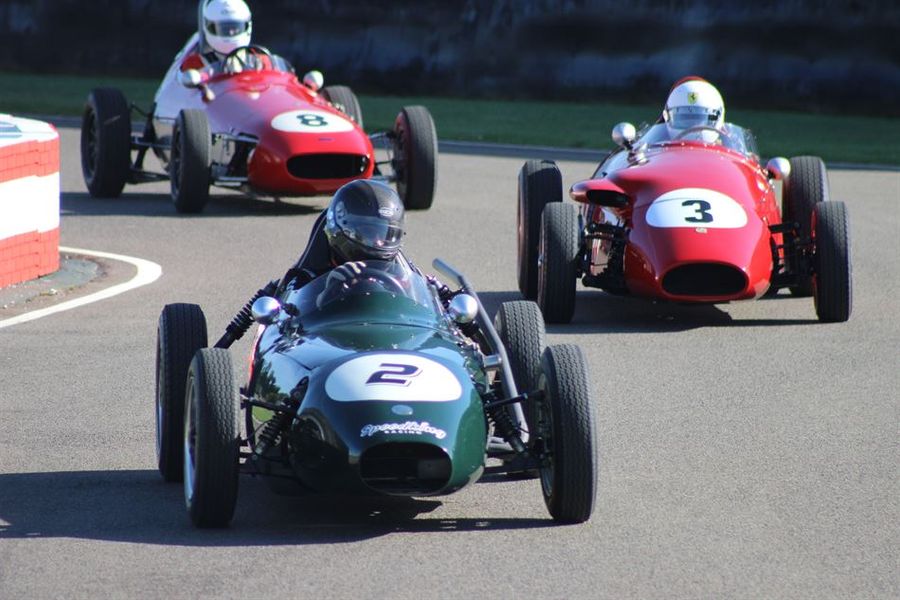 Forty-nine Formula Juniors, 33 of them from overseas, take to the track at this weekend’s Taupo Historic GP race meeting at Bruce McLaren Motorsport Park in the midst of a three-year Diamond Jubilee World Tour towards the category’s 60th anniversary in 2018.
Taking on the locals are 16-cars from the UK, 10 from Australia, three from the USA, two from Denmark, one from Canada and one from South Africa.  Among the Australian drivers is Perth resident, Joe Ricciardo, father of Red Bull Racing’s Formula One star, Daniel.
While its reign as a contemporary category was comparatively brief, at just six years starting at the end of 1958, the revival of Formula Junior racing is without doubt the greatest success story in historic motor racing over the past 20-years.
The Diamond Jubilee World Tour is the creation of the Formula Junior Historic Racing Association (FJHRA), masterminded in the United Kingdom by Duncan and Mair Rabagliati from their Wimbledon, London base.  Duncan is one of the 16 UK Formula Junior drivers at Bruce McLaren Motorsport this weekend in his 1959 Alexis HF101.
Patron of the Diamond Jubilee, Howden Ganley, the fifth of the eight New Zealanders to contest a World Championship Formula One Grand Prix (chronologically, Bruce McLaren, Tony Shelly, Chris Amon, Denny Hulme, Howden Ganley, Graham McRae, John Nicholson and Mike Thackwell) will also be in Taupo this weekend.
A period Gemini Formula Junior racer, Howden Ganley was the perfect choice for Patron of the Tour.  He raced possibly the most advanced Formula Junior of all, the mighty Gemini Mk 4a and went on to contest 42 World Championship Formula One Grands Prix driving for BRM, Frank Williams, March and Maki.  His career also included another of the categories racing at the Taupo Historic GP, Formula 5000.  Ganley took second in the 1970 European F5000 Championship to Peter Gethin, the only F5000 driver to beat the F1s in the Race of Champions (at Brands Hatch 1973), a race that is commemorated by the final race of the Taupo Historic GP weekend, the Race of Champions Revival.
Conceived by pre-war Italian racer Count Giovanni ‘Johnny’ Lurani in a concerted effort to promulgate the development of a new generation of racers in his homeland, Formula Junior called for lightweight front or rear-engined single-seaters powered by production car engines of 1000cc and 1100cc.  Superstar period Formula Junior drivers included future F1 World Champions, New Zealand’s Denny Hulme, Scotsman Jim Clark and England’s John Surtees
The Formula Juniors racing at Bruce Mclaren Motorsport Park this weekend range from Italian designs such as the shapely Fiat-powered Stanguellini of Nigel Russell to British Cooper and Lotus products that were mini versions of their own Grand Prix cars.
Initially named M.R.D., the Brabham marque joined the fray in 1962, the category’s penultimate season.  Rumour has it that the self-effacing team founder, the late Sir Jack Brabham only changed the name when it was explained to him by a Frenchman that the original name (M.R.D.) did not perhaps create the appropriate image when uttered in his native tongue.
Former Lurani Trophy champion John Delane and JR Mitchell have sent Lotus 18s from the USA and Doug Elcomb brings his Derossi Special from Canada.  Jac Nellemann (Alfa Dana) and Erik Justesen (U2 Mk2) have come all the way from Denmark.  Nellemann has raced almost continuously since the 1970s, including a brief foray into Formula One when he drove a Brabham in the 1976 Swedish Grand Prix at the Anderstorp circuit, a race in which Kiwi legend and former Taupo resident, the late Chris Amon had a podium finish cruelly snatched from him by suspension failure.
Of the Britons, watch for Peter Anstiss (Lotus 20/22), Robin Longdon (Lola Mk5A), Simon Durling (Lotus 18), Sir John Chisholm and Colin McKay (Gemini Mk2s), as well as Jim Blockley (Caravelle Mk2), Pat Barford (Lola Mk2), Richard Bishop-Miller (Autosport Mk2), Tony Pearson (Bandini-Fiat) and FJHRA ringmaster Duncan Rabagliati in his Alexis-BMC HF101.
Among the resident New Zealanders, the Gemini Mk3As of Jim Barclay and Noel Woodford will be towards the sharp end, together with Peter Boel’s Lola Mk5A, Ian Garmey’s Cooper T56, Phil Foulkes’ Lotus 20/22 and the BMC Huffaker Mk2 of Terrier Collier. The front-engined throng includes Aucklander Tony Olissoff’s front-wheel-drive Emeryson Elfin, Walter Findlay’s raucous Elva-DKW 100, and Roger Herrick’s Lola Mk2 chassis BRJ-1, the first single-seater from Eric Broadley’s celebrated Lola marque.
Formula Junior Taupo New Zealand