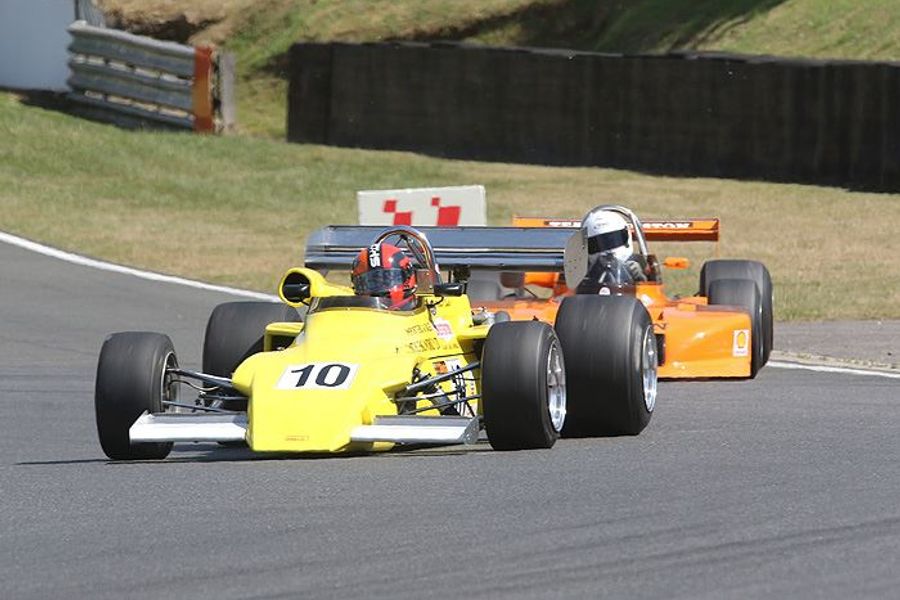 The 26th running of the Historic Sports Car Club’s annual Historic Super Prix on the Brands Hatch Grand Prix circuit was a huge success (Saturday and Sunday 11th and 12th of July), with big grids, exciting racing and a fabulous atmosphere. The weekend had a strong single-seater flavour with cars from Formula 1, F2, F3, Formula 5000, Formula Atlantic, Formula Junior, FF2000 and FF1600 all in action. Other headline races included the HSCC Jaguar Heritage Challenge and Pre ’80 Endurance Series.

Two rounds of the HSCC Historic Formula 2 FIA International Series wowed the spectators as Darwin Smith and Andrew Smith showed just how good historic racing can be. Although Darwin won twice in his F2 March 722 against Andrew’s Formula Atlantic March 79B, they raced wheel-to-wheel across two races and put on a stunning display of flat out racing.

It was close on Saturday but even closer on Sunday when just a quarter of a second split them after 20 minutes of racing. “That was a great race with Andrew,” said Darwin. “I enjoyed every second of that,” added Andrew. “It was 100% for 20 minutes.”

Greg Thornton scored a Derek Bell Trophy double in his Surtees TS11 after a pair of action-packed races from a strong grid. In the first race Thornton had to dig deep to see off a determined mid-race challenge from Frank Lyons (Gurney Eagle). On Sunday, a first lap tangle at Druids sent Thornton clear as Lyons and Ian Ashley (Lola T300) touched and spun. Instead, it was the unique Theodore TR1 of Philip Hall that came through to second and its first podium finish since Keke Rosberg won the 1978 International Trophy at Silverstone.

A fabulous field of Classic F3 cars brought together cars from the British and French race series and it was Brands Hatch newcomer Nelson Lukes who won twice in his Martini MK39 to extend his winning run in the French championship. Max Bartell (Chevron B34) was the best of the regular UK contenders.

Brand new for 2015 is the HSCC Jaguar Heritage Challenge for pre-1966 cars and Chris Ward always headed the 40-minute race as JD Classics team mate John Young led the chase in another E-type.

More quality sports car racing came from the HSCC’s Historic and 70s Road Sports Championship. Unfortunately, the Historic race was shortened after two separate red flags and the tight timetable did not allow a third start. When the results were declared, Kevin Kivlochan’s Morgan Plus 8 was ahead of Paul Tooms (Turner).

An excellent 70s Road Sports raced brought the weekend to a close and victory went to the Lotus Europa of James Dean despite a spirited chase from Charles Barter (Datsun 240Z). Peter Shaw (TVR Tuscan) and Julian Barter (TVR 3000M) made it a highly competitive quartet over the early laps and were never far adrift even after 20 minutes around the Grand Prix circuit.

Italian racer Michele Liguori made it two wins from two races in the new Pre ’80 Endurance Series as an excellent grid battled with an at times damp track on Sunday. The hour-long race was building towards a big battle between Liguori’s Lola T292 and the T282 of Leo Voyazides and Simon Hadfield. Unfortunately Hadfield was forced to make a second pit stop for a punctured front tyre to be changed and the time lost in the pits cost him any chance of chasing Liguori. Instead, John Burton took a fine second in his Chevron B26.

In the ByBox Historic Touring Car Championship Voyazides was a winner in his ultra-successful Ford Falcon and went clear of the pack once he worked ahead of early leader Tim Davies (Lotus Cortina). Warren Briggs (Ford Mustang) went through to second as Davies had to race hard to see off the Lotus Cortina of Mark Davies.

Reigning champion Jon Milicevic made a triumphant return to the Silverline Historic Formula Junior Championship to score a commanding victory as his rivals enjoyed an entertaining battle for second place. Westie Mitchell managed to get a few yards clear to give his De Tomaso another strong result. Meanwhile, Ian Jones (Lotus 59) was just too rapid for Classic Racing Car rival Andy Jarvis (Palliser) this time around.

Championship newcomer Richard Tarling (Elden Mk8) won the HSCC Historic Formula Ford 1600 Championship round but was made to work very hard in the early laps by James Hadfield (Titan Mk4). Unfortunately Hadfield was then sidelined with an engine problem and Richard Mitchell beat Max Bartell to the line buy six-hundredths of a second for the runner-up position.