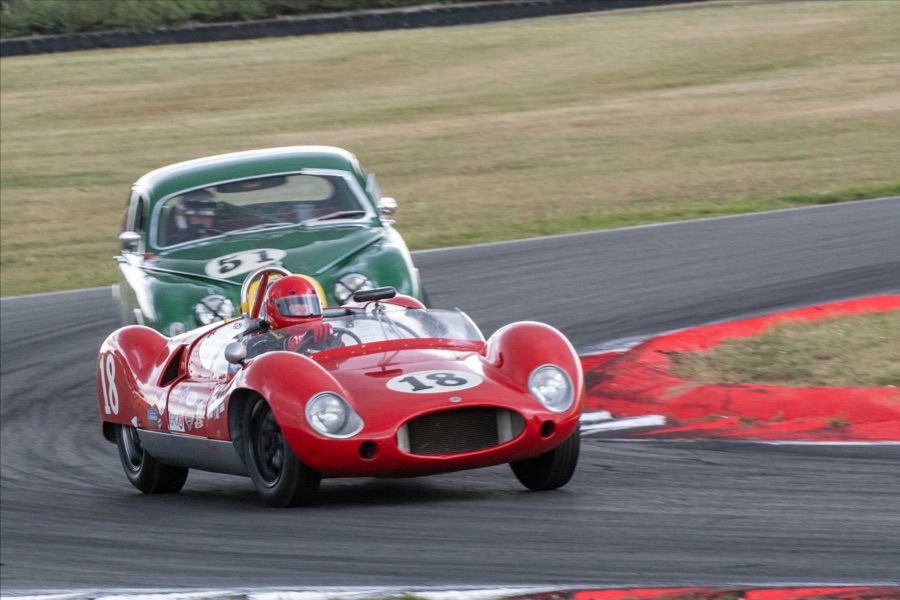 Snetterton on Saturday August 31st hosted AMOC Racing’s fourth race meeting of the season, where Chris Kemp and Rob Hollyman where amongst the day's winners. As ever the standard of racing was high with a broad swathe of historic and modern sportscars in exciting race action.

The AMOC Intermarque Championship and Aston Martin GT4 Challenge fields started the afternoon’s racing, with poleman Chris Kemp’s Aston Martin Vantage GT4 leading the field away and ending lap one with a gap to the rest, who were headed by Invitation class runner Ed Leigh in his BMW M3 GT4. Tom Black had qualified his Vantage second on his return to AMOC Racing, but spun down the order on the opening lap, and it was Matt Becker’s Vantage third, ahead of Intermarque runner Rob Hollyman’s Porsche 964.

Becker was up to second on lap three and right with Kemp heading into lap five, then was swiftly past and started to open a gap. Behind, Leigh was third with the Vantage GT4 of David Tinn up to fourth, Hollyman now sixth but still lead Intermarque car ahead of fellow Porsche crew James Neal and Ryan Hooker.

The pit window opened after 15-minutes and Hollyman was one of the first cars to make his compulsory stop, while the rest of the lead group elected to stop later. Becker pitted having completed 11 laps, the car having an ECU issue and not returning to the race. That put Kemp back ahead at the front before he duly pitted three laps later, Black and then Leigh also both leading before making their stops.

Once the order had settled it was Kemp ahead, but with Leigh’s BMW right with him and nosing ahead with eight minutes left. Hollyman continued to lead the Intermarque runners but behind him, Gavin Dunn was battling hard in his BMW with the Neal/Hooker Porsche for second before the latter lost time with a slide, Tim Bates then moving to third in the category and looking to close on Dunn before a clutch problem dented his hopes.

With four laps to go Kemp was back ahead and fended off Leigh to the line to take the GT4 win, Tinn third ahead of Robin Marriott and Black. Hollyman upheld Porsche honours to take the Intermarque win at the end of the 45-minte race, Dunn second from Bates and Neal/Hooker.

Roger Wills dominated qualifying for the Jack Fairman Cup including JEX XK and Mike Hawthorn Challenges and Innes Ireland Cup race, over eight seconds clear of the rest in his Lotus 15. He translated that pace to the race, the two-litre Lotus well clear at the end of lap one, Tony Ditheridge second in his Cooper Monaco with John Young, first of the Jaguar runners, third in his Mk1.

Jaguar regulars Rob Newall and Chris Keith-Lucas both went out on the first lap, while a driver on the move was Martin Brewer in the gorgeous Aston Martin DP214, sixth at the end of lap one from 12th on the grid, and fourth just a lap later. By lap five Wills was over 30- seconds clear, Ditheridge just two seconds ahead of Young in a David and Goliath battle, Brewer fourth and heading the rest.

Wills was never challenged and led across the line at the end of the 30-minute race, then Ditheridge just clear of Young, who was the first of the Mike Hawthorn category cars home. Robi Bernberg came back at Brewer to take fourth with his Cooper at two-third distance, the Aston Martin fifth and heading the Innes Ireland Cup runners.

The Jaguar Enthusiasts Club XK class proved to be unusually a race of attrition, Marc Gordon taking the win and eighth overall. 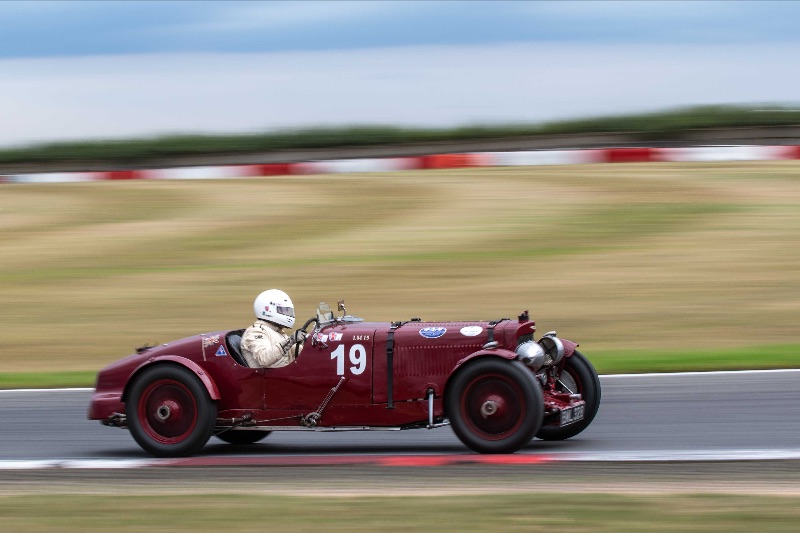 The popular pre-War Team Challenge race rounded out the day, the varied field released to race in a set order according to their handicap, the Bentley 8-litre of David Ayre and Christopher Scott Mackirdy’s Aston Martin Le Mans first away. Last car to start was the Talbot AV 105 of John Polson, 1m55s behind Ayre and Mackirdy but with a lap in hand.

Ayre headed the chase as the handicap unwound but had his hopes dashed with a spin at Wilson, the Aston Martin Ulster of John Briggs another spinner. Polson managed to stay clear on handicap the whole race, winning by just over 14-seconds, Clive Morley’s Bentley second from Briggs, Mackirdy and Ayre. The race saw Bentley and Aston Martin tie on the team scores on 35 points each.

The guest Equipe Pre 63 and GTS B race saw a large field dominated by the Austin-Healey runners, the marque filling the first seven slots at the end with Mark Holme winning from Richard Hywel Evans. David Keers Trafford won the GTS D category, less than half a second clear of the similar MGB of Tim Greenhill.

Later in the day the Equipe GTS A race was won by the MGB of Tom Smith, well clear of the Austin-Healey Sebring Sprite of Neil Fisher, who crossed the line just clear of Ollie Neaves’ MGB.