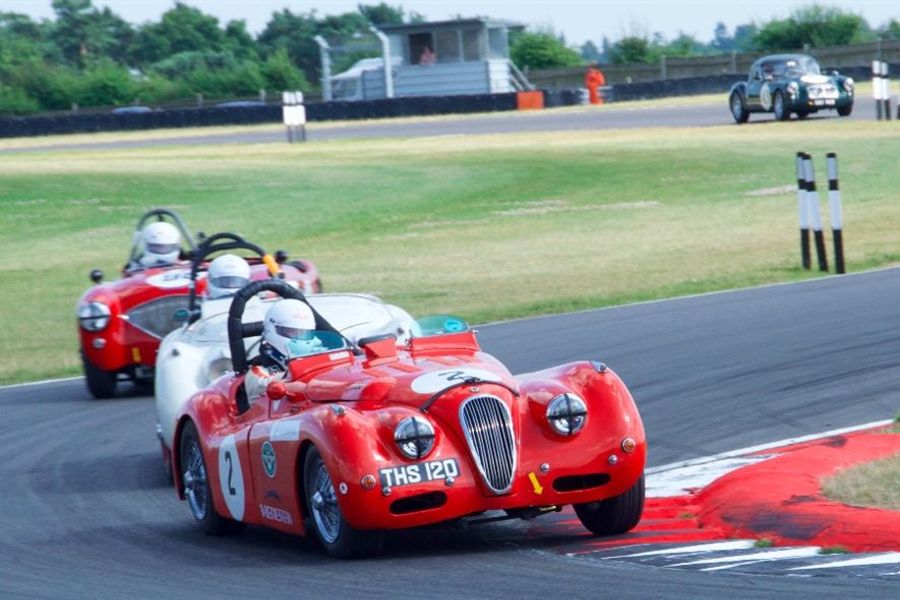 This Saturday, 8th July, the AMOC Racing team heads to Snetterton for a full day’s of racing covering a range of sports car racing, from the popular AMOC Intermarque Championship  to 50s Sports Cars, Innes Ireland Cup and Historic Touring Car Challenge.
The day kicks off with a 45-minute race for the AMOC Intermarque Championship where the competition is hotting up. Two weeks ago at Rockingham Rob Hollyman and his rapid Porsche 911 broke the domination held by James Hilliard & James Guess in their Porsche 968CS leaving them beached in the gravel from chasing the flame throwing 964. This weekend Hollyman is back and likely to be quick along the straights but can the front engined Porsche teams make up the difference in the tight switch-back infield?  Hilliard/Guess will be looking for maximum points but Bob Searles/Tony Jardine in their Porsche 944 have also been podium visitors more than once this season. More competition arrives from Martin Melling and Jason Minshaw in the Aston Martin DB4 Lightweight and Andy Wilson in his Ford Falcon.
Snetterton sees the second race this season for the AMOC 50s Sports Car grid taking in the Vredestein JEC Jaguar XK Challenge. The Jaguar XK120s of David Wenman and Rob Pinchbeck or the Jaguar XK150 of Marc Gordon are expected to be leading the pack. Martyn Corfield joins the 50s Sports car competitors in his cigar bodied Frazer Nash Le Mans Rep MkII, he’ll be racing against the MGA of Mark Ellis. Robi Bernberg returns in the lightweight T39 Cooper Bobtail who will have strong competition from James Paterson in the Lotus 11. Variety comes from the Turner Sports of Steve Watton, Austin Healey 100M of Paul Kennelly and the MGA Sebring of Glenn Tollett.
Motor Racing Legends brings the Historic Touring Car Challenge for Group 1,2 and Group A cars which raced in the British and European Touring Car Championship from 1966-1990. This incorporates the Tony Dron Trophy for Group 1 cars running to period specification. Snetterton is the third round of the season where a solo driving Chris Ward is likely to be leading the pack in the JD Classics Ford Broadspeed Capri. Chris can expect serious competition from four BMW M3 E30s including Brands Hatch race winner Mark Smith. Ken Clarke returns in his 1983 Hepolite TWR Rover Vitesse driving with Richard Postins and Ric Wood could also be key challenger in his Ford Capri co-driving with current BTCC driver Adam Morgan.
Equipe GTS join the day’s programme with a single 40 minute race for pre-66 cars up to 2.7 litre running to FiA Appendix K. This highly competitive series has seen a surge in popularity with grids full to bursting with some great British Classics including MG, Lotus, Triumph, TVR, Morgan, Autstin Healeys and more.
The Innes Ireland Cup rounds off the day’s race action and features GT and Touring Cars that would have raced internationally prior to 1966. The 45-minute race at Snetterton contains a host of classics from the Low Drag Jaguar E-Type of Martin Melling and Jason Minshaw, to the lightening quick Ginetta G10 of Hilliard /Guess. Two Austin-Healey 3000s join the battle Martyn Corfield and Clive Morley / Richard Hudson and the nimble lightweight Lotus Elan of Jeremy Cooke and Mike Dowd could also be a strong contender.
Qualifying action starts at 09.40 on Saturday morning for Equipe GTS, the first race of the day is the AMOC Intermarque Championship set for 11.55am.