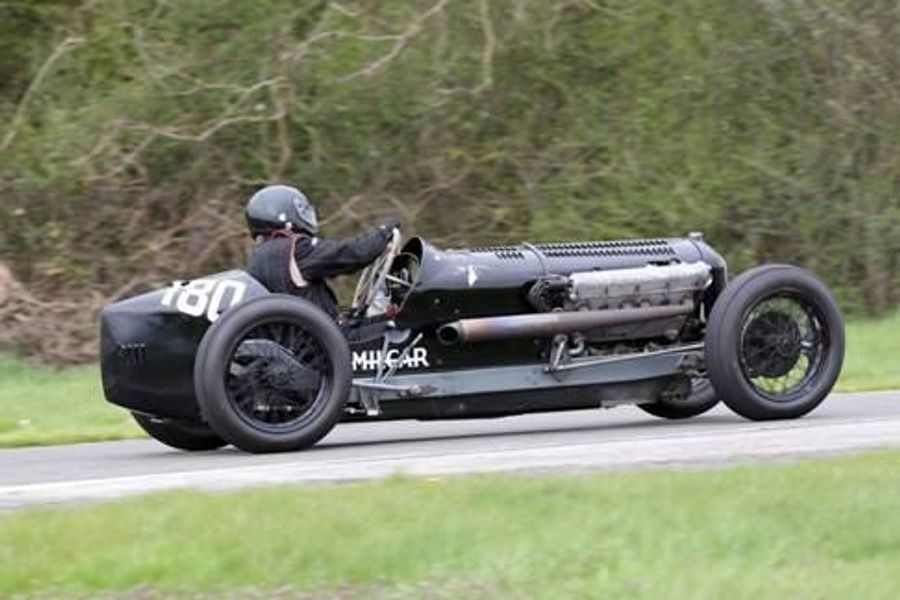 It was an outstanding opening round for the VSCC’s inaugural Speed Championship with another successful edition of the Curborough Speed Trials on Sunday 1st of May. An impressive capacity entry of over 130 Pre-war Racing and Sports-Cars descended on the Staffordshire venue – home to the Shenstone and District Car Club – for the traditional May Bank Holiday Speed Trials.
With the introduction of the Ccub’s inaugural MSA-registered Speed Championship this year, there was one significant change for the event with the adoption of the club’s standard 16-Class structure, which saw another extraordinary array of cars accommodated across the day’s entry.
Winner of last year’s trial Speed Series, it was a strong start to the 2016 season for Jo Blakeney-Edwards, who scored an impressive class victory amongst the Sports-Cars in her Frazer Nash Super Sports, just ahead of husband, Simon – sharing the ‘Nash – and the Riley TT Sprite of club President, Tim Kneller.
There were also wins for Joe Tisdall (Austin) and John Fack (Railton) amongst the Standard & Modified cars, whilst Kevin Morton (Riley), Pomeroy Trophy victor Dudley Sterry (HRS) and Greg Lerigo (Riley) triumphed in the Specials standings – the latter taking top Sports-Car title ahead of the much-fancied Morgan/Riley of David Pryke.
Mark Walker delivered an expected Edwardian Class victory in the ever-entertaining 1905 Darracq 200HP, whilst Geoff Smith’s Sturtevant-powered Piccard-Pictet was the pick of the Pre-1918 non-automobile-engined cars.
In one of the closest contests of the day, the Lagonda Richmond Rapier of Anthony Garner edged Matt Johnston’s Austin/MG LA Special by just half a second in the small capacity Racing Car class. A regular Frazer Nash Sports-Car Competitor, Yushan Ng claimed a handicap award on debut in his 1922 GN Akela racer with Robert Cobden a familiar name atop the same class in the Riley Falcon Special.
As anticipated, the day’s overall champion came down to a battle of the larger capacity Racing Cars of Class 15 (1501-3000cc) and Class 16 (over 3000cc); following his ‘FTD’ success last year, Tony Lees lay down the gauntlet in the famed ex-Ron Footitt AC/GN ‘Cognac’ with a best of 37.74 seconds, good enough for Class victory.
However, Julian Grimwade improved the mark by 0.3 seconds in the Alvis-powered Frazer Nash Norris before an incredible run for Tom Walker in the Amilcar-Hispano Special saw the Leicestershire-man claim the spoils, with a best time of 36.53 seconds on his final run of the day.
Speed Championship Curborough Speed Trials Shenstone and District Car Club VSCC