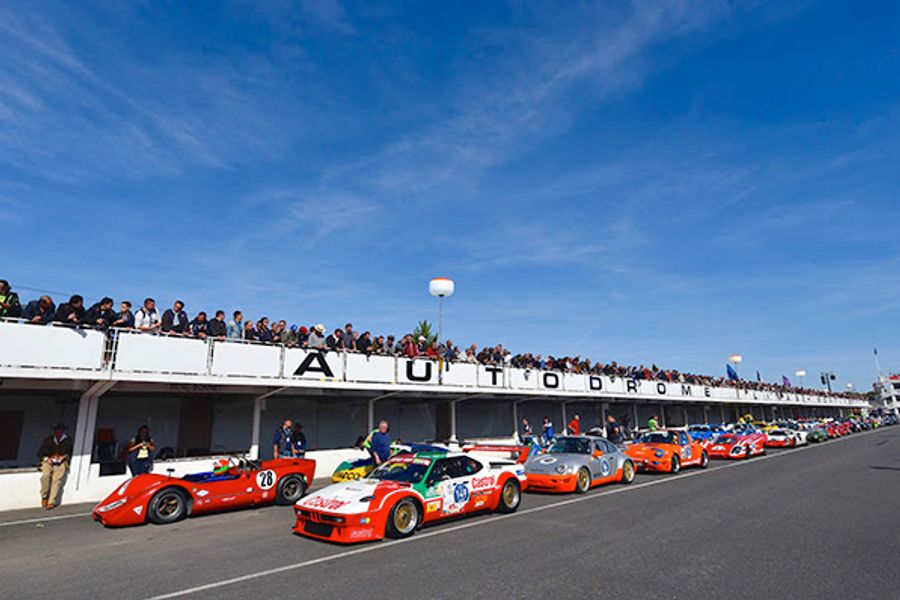 The recent fourth edition of the annual Les Grandes Heures Automobiles (LGHA), held T the legendary banked Linas-Montlhéry Autodrome circuit just south of Paris – was unanimously declared to be the best yet by both the hundreds of participating competitors. The record number of spectators, from all over Europe, reveLled in the glorious sunshine as they enjoyed spectacular vehicle demonstrations on the steeply banked Montlhéry track.

The famous record-breaking metallic-bronze Jaguar XK120 Fixed Head Coupe, registered LWK 707 and driven in early August 1952 by a quartet of British drivers - Stirling Moss, Leslie Johnson, Jack Fairman and Bert Hadley – to set an average speed record of 107.46 mph for seven days and nights none-stop at the Linas-Montlhéry Autodrome track, made a welcome and emotional return to the steeply racked circuit especially for the LGHA.

The Jaguar was joined by a Ferrari 156 F1 ‘Sharknose’ from the UK, driven by racing legend Arturo Merzario from Italy, along with the well-known BMW 3-Series Group 5 ‘Jägermeister’ from Switzerland, a selection of vintage competition Porsches from Germany, motorcycles from Belgium. There were many exceptional models from France, including Matra, Alpine, Citroen, Bugatti, Peugeot, Voisin, Venturi and others, such as some rare racing Abarth SPs, Lancia Stratos, Ford GT40s and various Ferraris.

For the fourth LGHA, Europe converged on the Autodrome to put it back at the heart of the historic motorsports, but with the modern additions of a series of activities, including Formula E and a drift session and current trials bikers, using parts of the new Montlhéry infield construction site to jaw-dropping advantage. The Paris auction house Aguttes organised its second sale in the LGHA’s 1924 Pavilion, its star lots including a trio of important AC models, plus a number of modern classic hot hatches; all fetching healthy prices.

More than 50-exhibitors presented their latest products and expertise to the LGHA visitors, including Alpine, Alfa Romeo, Effeffe and new local passenger car producer MPM Motors, with its Erelis model making its dynamic world debut on the Montlhéry banking, with the LGHA visiting public able to drive the cars for themselves. There was fun for younger ages too with mini-quads, mini 4x4s, and mini-bikes to add to the passion for motoring from an early age.

Away from the historic competition machines at the LGHA, a huge display of around 1,000 vehicles from many classic car and bikes clubs were also in attendance, as well as exotic special supercars and performance GTs, plus a special LGHA classic car tour to the event.