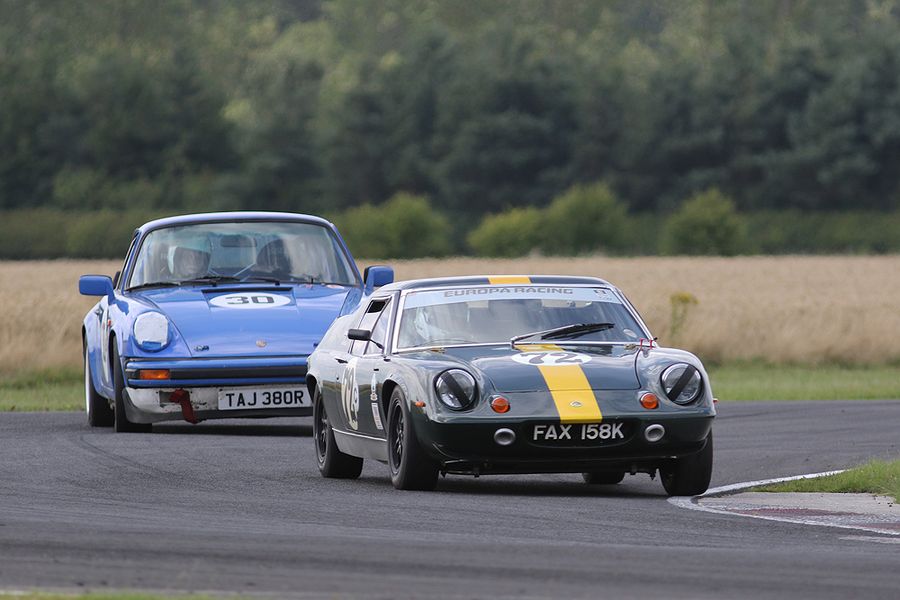 The Historic Sports Car Club’s season continues at the Croft circuit in North Yorkshire this weekend (3rd/4th August) as nine of the Club’s categories provide the racing element of the very popular Retro and Classic Weekend.

Now in its fifth season, the Jaguar Classic Challenge will make its Croft debut with an hour-long race on Saturday. The battle at the head of the action will be among a clutch of quick E-types including those of Jamie Boot, who also races his TVR Griffith in Sunday’s Guards Trophy race. Mark Donnor and father and son combo Paul and Myles Castaldini are other leading contenders, while two drivers make the relatively short journey from Cumbria. From Workington is Robert Gate, while Maryport’s Robert Farrell has former single-seater ace Dave Coyne sharing his car.

The man to beat in the Historic Road Sports Championship through the early summer has been Kevin Kivlochan in his stunning AC Cobra. With seven wins on the bounce, he will now bid to make it nine from nine at Croft. Title contenders from the other classes include Jonathan Rose (Lotus Elan) and Tony Davis (Sebring Sprite), while a strong Lotus Elan field will be snapping at the heels of the Cobra. Along with Rose, Jim Grant, Barry Ashdown and Adrian Gilbert are all rapid while Dorset-based Paul Tooms makes a welcome return in his rapid Turner.

To date in 70s Road Sports, John Dickson (Ferrari 308GTB), former champion Charles Barter (Datsun 240Z), current champion Jeremy Clark (Lotus Elan) and Kevin Kivlochan (Morgan plus 8) have all won races. However, it is the consistently rapid Jaguar E-type S2 of Matlock-based Adam Bagnall that has headed in the title race over the first half of the season. Missing the Donington Park opener has left Clark playing catch-up, but victories at Brands and Anglesey have put him back into contention. Other strong runners include Porsche ace John Williams, Robert Gate (out in his other E-type alongside his Jaguar Classic Challenge car) and Howard Payne in his Lotus Europa.

Sunday’s 40-minute mini-enduro marks the start of the second half of the season in the HSCC Guards Trophy. Consistent class results have put Ross Hyett (Lotus Elan) level with Mike Gardiner/Dan Cox (TVR Griffith) at the head of the points. Michael and Andrew Hibberd face stern opposition from two more Lotus 23Bs for young chargers Benn Tilley and Peter de la Roche, who both race solo, while ranged against the Gardiner/Cox TVR and Hyettt’s Elan in the GT section will be John Watson/Nelson Rowe (Lotus Elan) and the TVR of Jamie Boot.

The Historic championship is wide open after five of 13 races with four winners to date. Andrew Park and Benn Simms are probably the fastest of all but have both missed races this season, as has double Anglesey winner Ian Pearson. Jason Redding headed the points before Anglesey but was sidelined in qualifying by a gearbox issue, so it is all to play for right now.

The man to beat in the URS Classic section, and a contender for overall race victory, is young Ben Stiles from Sussex who won twice at Anglesey. Croft is another long trip for Ben, the son of Brands Hatch Formula Ford veteran Trevor.

Rounds 12 and 13 of the HSCC Historic Formula Ford Championship will surely deliver more fabulous racing. With another eight races to run after Croft, reigning champion Cameron Jackson already has one hand on the crown after dominating the first half of season with eight wins from the first eight races.

The big challenge to Jackson at Croft will come from the three Merlyns entered by the Speedsport team. Pierre Livingston and Ben Tusting are the consistent rivals to Jackson and they are rejoined at Croft by the rapid Ed Thurston, who is only doing selected rounds this year. In the Over 50s division drivers like Rob Smith, Ted Pearson and Tim Brise are to the fore.

This is the mid-point of the season for the Historic Formula 3 Championship, which has rounds six and seven of 11 at Croft. Over the opening three races reigning champion Jon Milicevic won three in a row in his Brabham BT21B. However, a broken wishbone in the opening race at Anglesey forced retirement as Simon Armer swept ahead to win twice in his March 703. That result has given Armer a useful championship advantage, so Milicevic has it all to do at Croft.

Classic Clubmans is home to the incredibly rapid front-engined sports-racing cars of the late 1960s and 1970s. The fastest cars run in Class A and the man to beat is Mark Charteris in his Mallock Mk20/21. However, Clive Wood currently tops the Class A points after an excellent campaign across the opening three double-headers.

Class B is for the cars using 1600cc Ford Kent engines and currently it is category veteran Barry Webb who heads the points in his Mallock Mk16BW. However, Webb was not entered at the time of writing so this could be an opportunity for Stephen Littler and Martin Walker to close the gap. The invitation class for period Sports 2000s is headed by the Lola T492 of Trevor Welsh.

This weekend marks the mid-way point in the HSCC Historic Touring Car Championship. Currently, the title race remains wide open as overall pacesetter Richard Belcher (Lotus Cortina) has not had enough class rivals to earn him full points. Belcher, a British Touring Car racer in the 1980s, won twice at Anglesey and will aim to do the same again at Croft at one of his favourite tracks. The key rival to Belcher will be Jonathan Evans in his Ford Mustang. Evans made an impressive debut in the car at Snetterton in early June and will now try and exploit Ford V8 muscle here at Croft.